US immigration...up, down or the same?

My wife sent me an email last week with one of those Onion snippets about how foreigners were confused by the recent ruling to go forward with the Presidents ban on immigration from selected countries. The joke was they were confused because no one really wants to visit the US anymore in any case, so why do we need travel restrictions. Anyway, I thought it was funny so my coworkers and I were discussing this around the water cooler and I was wondering how accurate it was. I did a quick check, and it doesn’t seem that visits to the US are down all that much, if at all. It fluctuates year to year, but it didn’t seem that 2017 was a remarkable year. I did a bit more digging, but I couldn’t find out if the US was substantially down wrt immigration in that year however. Not sure why my Google-fu was failing, but I couldn’t get a hard answer along with a comparison to pre-Trump years, so was wondering if anyone here knows. Is immigration in total substantially declining since Trump became president? I know we are ‘only’ 2 years into his reign, but was wondering if there is any data indicating a decline.

On a related topic, is there any actual indication that illegal or unauthorized immigration is down at all? I seem to recall that even under Obama it had dropped off, was wondering if that trend has continued or even accelerated.

I was reading an NPR article recently that said illegal immigration had changed. Until the 2008 recession it was mostly Mexicans (and some Central Americans) looking to make money to send home, or their families coming to join them. As the recession removed the financial incentive, the majority of migrants are refugees from south of the border, particularly the triangle of Honduras Guatemala El Salvador. They are fleeing gang violence, gangs dominate many of the poor neighbourhoods and are active in the drug trade. One cause of this is apparently that illegals convicted in the US of crimes started being deported upon release in serious numbers in the early 2000’s, and of course - many of these were members of organized gangs in the urban centers. 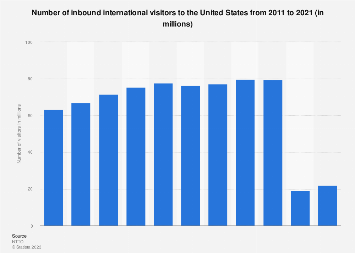 International visitors to the U.S. | Statista

This article has a different take: https://www.macleans.ca/politics/worldpolitics/despite-donald-trump-canadians-are-still-flocking-to-america/

Incredibly, U.S. data, backed up by Statistics Canada, reveals that Canadian tourists are actually bucking a global trend in the Trump era. Canadian business trips to the U.S. have declined, but visits for pleasure are up markedly. In January, total travel to the U.S. from overseas dropped 2.3 per cent from the same time in 2016. But Canadian tourist trips ticked up 7.4 per cent. The next month, overseas trips were down more than 10 per cent, and Mexicans reduced their own travel by eight per cent. As for Canadian vacationers? Our year-over-year number increased 7.04 per cent. March was the same story. In May, when the loonie sagged to its lowest point of the year, tourist trips dropped. But that number rebounded in the months that followed. By September, the latest month for which data are available, Canadian tourists had amassed more than 15 million trips in 2017—4.8 per cent above 2016 levels. (Total trips, including business, had increased by 1.9 per cent.)
…
Among a select group of countries with high volumes of travel to the U.S., only a few have joined Canada on the positive side of the ledger. June 2017 data shows that South Korean trips to the U.S. have spiked this year, while Italy, Ireland, and Spain’s numbers are higher than Canada’s. But trips from the U.K., China, India, Switzerland, and a clutch of South American countries are down significantly.