US Nuland caught on tape: **CK the EU!

The frustration of the Obama administration at Europe’s hesitant policy over the pro-democracy protests in Ukraine has been laid bare in a leaked phone conversation between two senior US officials, one of whom declares: “Fuck the EU”.

“I would say that since the video was first noted and tweeted out by the Russian government, I think it says something about Russia’s role,” he said.

It’s interesting to watch how involved the Americans are in the Ukraine and their attempts to oust the democratically elected president there. It shows how schizophrenic they are. How hypocritical when you compare the different policy to Egypt. The Americans just can’t stop themselves from interfering in other nations business can they. Will they ever stop? Have they not destroyed enough countries in the last 20 years! has their appetite for terrorism and chaos around the world . Was Syria not a lesson they would learn from? We are watching the events closely here in MENA. Thankfully the EU AT LAST seems to be waking up to the madness of being the partner in every American new adventure. I’m glad the Russians released the tape so the Europeans can see again that their alliance with the USA needs to be revised. Europeans must be sick of being dragged into war after war led by the Americans. At last they are waking up.

At the State Department, Psaki said that if the Russians were responsible for listening to, recording and posting a private diplomatic telephone conversation, it would be “a new low in Russian tradecraft” 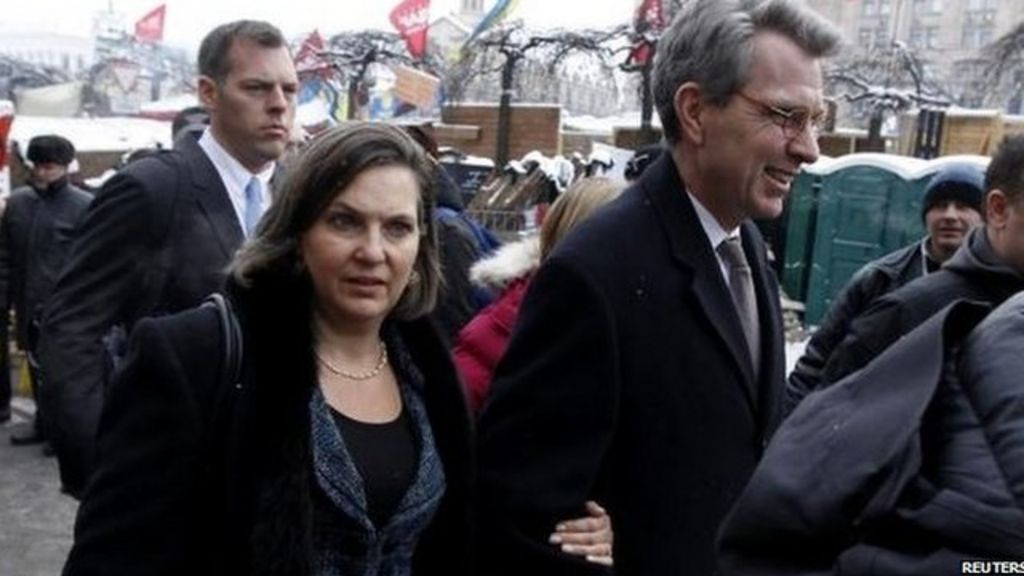 An apparently bugged call between US diplomats reveals a frank exchange on the strategy for Ukraine and disparaging comments about the EU.


the tape where the US was caught out

I’m fairly sure the EU agrees entirely that the present Ukraine regime is illegitimate. As to whether its relations with the US should be revised is rather separate - it would be stupid of them to back the unpopular regime just to spite the US.

I can’t imagine that the Russians really wiretapped a phone conversation between foreign diplomats. No civilized nation would ever do that.

I can’t imagine that the Russians really wiretapped a phone conversation between foreign diplomats. No civilized nation would ever do that.

No no no … see it’s ok to wiretap IF it puts America in a bad light.

Anecdotally speaking, I have a few Ukranian friends and they’ve been screaming at the US for not doing more to support the uprising, given the extreme measures the government has been taking. The country is very much divided, with the southeastern regions (where Russian speakers predominate) leaning toward closer ties to Russia and the western, Ukranian-speaking regions leaning towards closer ties to the EU. Welcome to the new Cold War.

As for “F**K the EU”, pretty much anyone who has had to deal with the EU at any point will have said that at least once. It rates a “meh” from me.

I wouldn’t be surprised if a few EU officials have said ‘**** the United States’ at one time or another.

I wouldn’t be surprised if a few EU officials have said ‘**** the United States’ at one time or another.

I wouldn’t even be surprised if a few EU officials have said “Fuck the EU” at one time or another.

Snowden, Syria, this … you could almost think Putin is going out of his way to piss off the Beacon of Freedom.

Or is it the other way around?

One way or another, it’s definitely a truly evil act, totally dismissive of civil liberties, that an American diplomat’s phone line would be tapped by one of America’s allies.

Except for when they do and then it’s a good thing. In either event, when the person responsible for leaking this information manages to flee to America and requests asylum for exposing the sins of the Russian spy regime, I’m sure that we’ll welcome him with open arms/execute him, whichever of the two would make us look worse/better depending on the author of the upcoming viral op-ed about it.

You haven’t quite worked out who and why this happened.

What are we debating now? Is it how the US dragged Europe kicking and screaming into the two biggest wars in the past century?

Interesting view on the Kaiser resorting to sinking US shipping, and on Pearl Harbor and the Nazi declaration of war … but hey, for several decades the US got its own empire out of it all.

The US Nuland is a Snowden-class destroyer that patrols the North Sea. Not sure what it has to do with Ukraine.

I’m intrigued by the idea that it took the U.S. to sow chaos in Syria. I had the impression they were doing just fine without our help.

… but hey, for several decades the US got its own empire out of it all.

The US Nuland is a Snowden-class destroyer that patrols the North Sea.

They built a destroyer just to deal with Edward? :eek:

^ a little too wacky and off topic for me. Pass.