I’ve read about The Battle of Leyte Gulf. Historical books about WWII are a favorite of mine.

Halsey had been lured away chasing Ozawa’s carrier force. A small escort force was left behind to guard ships in Leyte Gulf. The Destroyer Johnston had a light hull, 5 in guns and torpedoes.The Johnston fought Japanese Battleships and did a lot of damage with their small guns.

The wreckage is preserved really well. The video reported so far is amazing.

The section Halsey’s Decision summarizes his mistake and the Japanese decoy. Battle of Leyte Gulf - Wikipedia

Extracted from the Johnston Wiki article.

The vessel is famed for her brave action in the Battle off Samar. Outgunned by the Japanese, USS Johnston led an attack of a handful of lightships against a colossal fleet until it was surrounded.

According to the US Navy: 'One by one, Johnston took on Japanese destroyers, although Johnston had no torpedoes and limited firepower. After two-and-a-half hours, Johnston - dead in the water - was surrounded by enemy ships.

‘At 9.45 am, Evans gave the order to abandon ship. Twenty-five minutes later, the destroyer rolled over and began to sink.’

Her action in the battle was central to the overarching Battle of Leyte Gulf, considered to be the largest naval battle in history with more than 200,000 personnel. 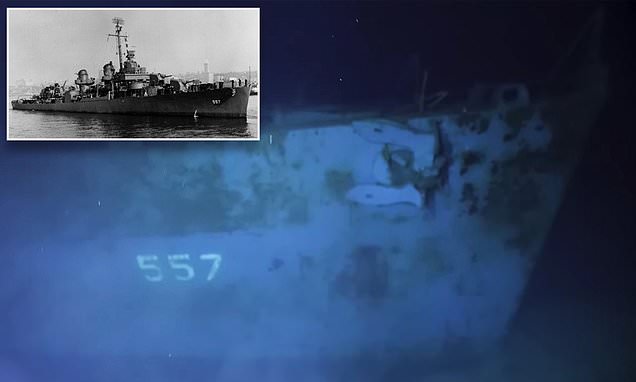 US crew has reaches the World's deepest ever shipwreck at 21,180ft

The ship was discovered in 2019 in the Philippine Sea, but it was not until now that a team has been able to fully map the wreckage, which is more than 100 feet deeper than previously believed.

I found a calculator online. The pressure at that depth is nearly 9,400 psi.

The Yamato, by itself, outweighed the combined total weight of the entire Taffy-3 task force. Evans and the men of the Johnston were heroes among heroes that day.

I’m sure you’ve read it, but in case anybody else is interested, The Last Stand of the Tin Can Sailors (about the battle) is absolutely superb, amazingly clear in its account. But also riveting and inspiring.

That’s the book I read several years ago. I couldn’t remember the title.

Some planes stationed on the islands participated in the battle against the Japanese ships.

We had just put soldiers and planes on the Islands. There was a concern the Japanese would invade again. Admiral Halsey returned with the main fleet barely in time.

I’m surprised there aren’t more Taffy 3 What If’s, like What If Halsey’s Battleship line hadn’t been pulled away and Halsey’s Battleships engaged Center Force (who still had Musashi). You could make an entire book about the potential What If’s of that battle. What If Center Force took the Southern Route? What If Southern Force had been given better battleships? Stuff like that.

It seems so appropriate that the bow of the ship still stands proudly with 557 clearly visible. The deck guns poised and ready to fire.

The photos are a reminder of the ship’s fighting spirit. The crew fought until exhausted and many of them are still resting there.

It’s quite a legacy.

Such a small ship to take on battleships, my dad served on a Fletcher Class destroyer in the 50’s.

Drachinifel’s vids on the Johnston herself and on the Battle Off Samar. The latter with the excellent comment about a Japanese unit maneuvering “to seek a more Johnston-free fighting position”.

Thank you for the videos JRDelirious.
I always enjoy anything relating to the Navy in WWII.

Not to take a poke at the Daily Mail’s account but didn’t an editor question why the first expedition reported wreckage and virtually no remaining hull seen, while the latest probe found the hull “remarkably intact”?*

And how does anyone know the guns are still pointing “in the right direction”? Outward yes…

And how does anyone know the guns are still pointing “in the right direction”?

The picture shows them pointing to starboard, as in the direction to the right. So that may be a bit of confused rewriting of someone’s notes.

I’m not surprised. Johnston was so bad-ass it even sank the deepest!