Utterly dopey characters who are actually very good at their job

Note: I would like to preemptively disqualify the various flavors of “absent-minded scientist” from this discussion or they’ll drown out everything else. We can take them as a given.

I’m also not really talking about the “idiot savant” trope, which usually features people who have explicit developmental disabilities and often relies on unpleasant stereotypes.

I rewatched Zoolander a while back. One of the ongoing jokes is that Zoolander is universally respected in his field, even though the audience is unable to see why. At the end of the movie, it’s revealed that “Blue Steel,” a pose he’d supposedly been working on for years and which the audience is meant to believe is either fake or exactly the same as the rest of his poses, was not only real but so good that it has literal magic powers.

An example from my childhood was Darkwing Duck. I remember thinking from trailers (remember when Saturday morning cartoons were so popular they had previews?) it was going to be in the vein of ‘Inspector Gadget’ type shows, but it surprised me because Darkwing was a component crimefighter in his own right and despite his goofiness.

These are characters who are dopey, but never irredeemably. They don’t succeed solely through bumbling good luck and the help of underappreciated sidekicks - that was the running gag in Inspector Gadget - but because they’re actually pretty good at what they do.

Maxwell Smart was pretty goofy, but he always was able to come up with a plan to outwit and defeat the villain (sometimes with 99’s help).

Randy Disher on Monk was pretty much always portrayed as an immature idiot. But there was one episode where Stottlemeyer was shot and Disher acted immediately, sheilding Stottlemeyer, calling in a short, clear report of what was happening, and in general doing instinctively what an experienced cop would do.

Sad sack Robert Barone, on Everybody Loves Raymond, living with his parents, unlucky in love, constantly jealous of his brother, is a NYC policeman.
We never hear much about his job other than he has that job and a partner. He takes Raymond out for a ride-along and during a break in a restaurant, thwarts an armed robbery in progress. Ray is amazed and awed, never seeing Robert ‘in action’ before.

90% of Columbo’s dopiness was of course a front to let the suspects’ guard down, and he was actually very very good at his job. But there was some discussion of whether any of it was ‘real’ in a “I’m watching every episode of Columbo” thread I started a few month ago.

I noticed in one of the very early episodes he did that ‘patting down every pocket, “I know it’s here somewhere” thing’, looking for a pen, and it was after the perp was walked off, when he no longer needed to put on an act. So apparently in the Columbo canon it’s not 100% phony.

Someone in that thread said they heard or read an interview with Peter Falk in which he said something like “if Columbo appears bumbling or absent-minded for real, it’s only because he’s laser-focused on catching murderers, to the detriment of everyday life.”

The character “Zero” in Beetle Bailey seems utterly clueless, but in one episode he’s the one who figured out how to get a jeep across a river when the bridge was washed out, and no one else knew what to do.

It might have been a “once only”, but it shows what he was capable of.

Michael Scott is a bad manager and at least in the early Office seasons a questionable person but he was a good Salesman.

Charlie on “It’s Always Sunny” is normally portrayed as being far from the sharpest knife in the drawer, and is actually illiterate, but he seems to be the only one who does any actual work around the bar. The “Charlie Work” episode where he took charge to make sure the bar passed its health inspection was a funny example.

Cliff on Cheers was a good mailman.

In the movie MASH, Frank Burns kills a patient. In the TV show, he may not have been as skilled as Hawkeye and Trapper, but I don’t think they ever depicted him committing malpractice.

Sterling Archer was a terrible human and awful at being on a team but, left to his own devices, was actually really good at infiltration/retrieval missions and combat. If I was being held hostage in a far flung junta camp somewhere, send him in. I qualify him as “Dopey” in this context given the number of basic concepts he fails to grasp in any given episode.

At least in the first handful of seasons; I don’t know if he got the Homer treatment into total incompetence later on.

Tobias Fünke is surprisingly competent the few times we see him take off his acting pants and pull his analrapist stocking over his head.

Pretty much the whole premise of Forrest Gump is a dim bulb who is surprisingly good at whatever job (or sport) he finds himself in.

Kind of a digression, not being a “Seinfeld” fan. Why put a garbage disposal in a shower to begin with?

Orr! And nobody saw it coming. Genius.

Kind of a digression, not being a “Seinfeld” fan. Why put a garbage disposal in a shower to begin with?

Kramer is Seinfeld’s across the hall neighbor in his apartment building who always has some kind of wacky hare-brained scheme going on. In this particular episode, he decided he could save time by doing his food prep while he was taking a shower, so he wanted to put in a garbage disposal.

Yeah, I’d say “hare-brained” is a pretty good description of that concept. Very dubious sanitation for either the body or the food. 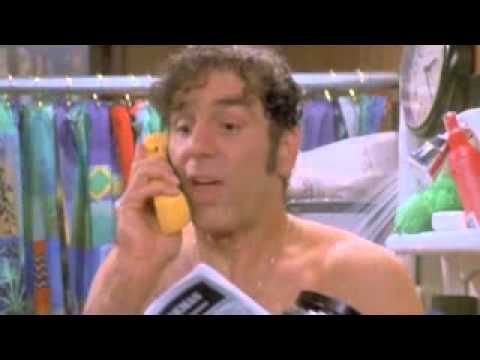