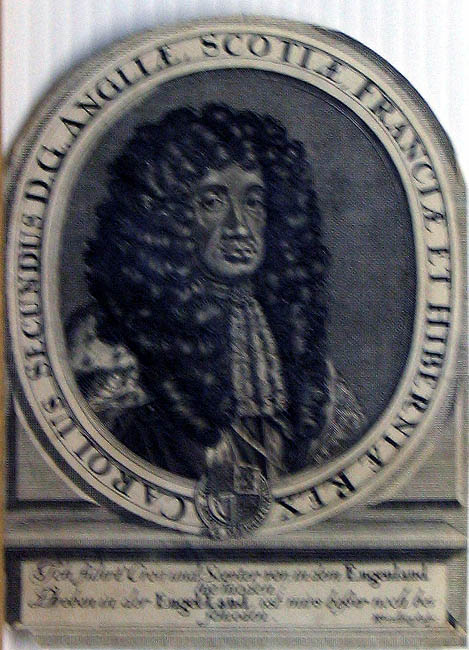 [Charles II Stuart, named THe Black Boy]
My research after three years resulted in a theory named Blue blood is black blood (1500-1789) by Egmond Codfried. Blue blood is the highest European nobility, starting somewhere at the end of the medieval period. Blue blooded nobility typically have no diploma’s given by a king, but were always considered nobles by their peers. From the highest nobles came the European kings, who were always bloodrelatives. Power was also based on marriages. Blue blood was symbolised by images of the Moor, a classical African in looks. This has by the way nothing to do with Islamic Moors, which study I consider utterly useless.
The Black Europeans I’m talking about are descendents of the first Europeans, the Grimaldi Human, which entered Europe 43.000 years ago. They lived on till way into the 19th century, their numbers augmented by the Garamante, who were brought in 50 BC to Europe by Caesar to fight Germanic peoples.
The first case I present is Charles II Stuart (1630-1685), King of England. Named The Black Boy, because he looked black. He was described as a tall black man. And James Boswell described him as The Swarthy Stuart. In google one finds portraits of a white man with black hair, but also prints which show dark skin. So we have four sources about his black looks. His skin was not white and there can be debate about how Classical African his facial features where. But white he was not.

Normally some people react irrational and with great panic and ignorance to the above statement. They do not ask question or study sources but ridicule and insult. Let’s hope those kind of people ar not on this forum and moderation will call them to order. People should stop before they speak and look in google for what information and images I have posted under my name, which is also my real name. The images come straight from other sites, who I do not expect to be doctoring images of whites to look like blacks. Royal portraits are found in the site of The National Portrait Gallery, with like 27 pages of portraits of Charles II Stuart, either white looking or black. Off course black babies come from black couples, as intermarriage is part of the nobility.

Over the coming moths I will be posting more information and look forward to a pleasant, civil discussion.

Well, I know moths can turn black over the span of a few generations…

Anyway, the royals were so inbred that their “blood” had little effect on the general population, insofar as with the exception of a few scattered illegitimate children, royal genetics were pretty much a dead end.

Tell us about how the Greek on all the single side of her family (since the Ptolemies adopted the ancient Pharaonic incest marriage pattern) Cleopatra was actually Nubian, grampa!

Well, I know moths can turn black over the span of a few generations…
Anyway, the royals were so inbred that their “blood” had little effect on the general population, insofar as with the exception of a few scattered illegitimate children, royal genetics were pretty much a dead end.

My research is about the time when they were running the show (1500-1789). They were a social class which intermarried.

Not all European blacks were noble, some where normal citizens, but because of their black and coloured looks they were treated as superior. The structure during this period can be described as Reversed Apartheid, with a noble, black minority dominating a white and coloured majority. The French Revolution was the turning point. Hence racism can be deconstructed as an overwrought liberation ideology to free Europe from Black Superiority. Whites are still taught to fear blacks because they were despotically oppressed by blacks, the blue blood nobility and kings.

Whites do not make black babies, unless there is some recent black ancestry in both parents. But its important to arrive at some definition of who is white and who is black.

Another thread will be about human albinism in which I found a explanation for where whites come from.

Tell us about how the Greek on all the single side of her family (since the Ptolemies adopted the ancient Pharaonic incest marriage pattern) Cleopatra was actually Nubian, grampa!

Cleopatra is described as black.
Some pieces at the Louvre Paris show her relatives as with classical black features: noses, lips, hair.

But lets not confuse the matter by mixing periods, please

Afrocentrism Comes To The Dope
Act I, Scene 1

Afrocentrism Comes To The Dope
Act I, Scene 1

Am I’m breaking new ground?
I’m from Surinam, SA, and live in The Hague, The Netherlands and in Surinam.

Even IF Charles II looked black (whatever that means), it doesn’t even come close to making the idea of the entire European royal class being black plausible.

She was a French Princess. We have to re-ajust our image of a European princess.
Sh was the daughter of Maria de Medici, Queen of France and second wife to King Henri IV of France.
She was the sister of king Louis XIII.
She was the aunt of Louis XIV, The Sun King. He and Charles II were cousins.
The well preserved mummy of Louis XIV was described in the 19th century as ‘Black as ink.’
There is one black image in google thumpprints “codfried louis XIV” but it cannot be seen by itself due to censorship.

She was a French Princess. We have to re-ajust our image of a European princess.

Here we have a image of Barack Obama looking white.
One can use any technic to show a black person to look white.
Obviously this is some joke as most people are aware that Obama is black. The whole noise is about Obama being black, right?

Now do we consider Obama white because there are some four or five images of a white Obama? No, because we look at descriptions which tell us he is black.
What would happen if in a hundred years Obama is only shown as a white person in Museums?
If you can relate to this question without hysterics you grasp the point of my research.

The whitened images of the European royals who are described as black or coloured should be seen as revisionist fakes. They are over paints or propoganidistic whitened images. To use them today without telling us they are whitened is a revisionism of history.

You know, this is the sort of thing that people would have noticed at the time.

I don’t see the supposedly African features.
Why?

Blacks and coloureds come in many shapes and forms, and not everyone has classical african features, not everyone has frizzy hair, thick lips, broad noses or subnasal prognasty. Yet they are not considered whites, they are blacks. Somalis and Ethiopians arriving in the US are not treated as fellow whites. They are looked upon as blacks, no matter how straight their hair or narrow their noses might be.

Now that you are given sources of the black looks of her son you might understand that his mother, Maria Henriette should have been black too.

You know, this is the sort of thing that people would have noticed at the time.

O yes they did. But what you mean with ‘people’? White people?
I never questioned my father or my family being blacks. We were just blacks. Actually going to Holland made me very aware of my blackness and if I belonged.
The whites who grew up with a black elite did not question this. And the ones which did were quickly made to understnd that this is how things were and were going to stay. The blackness of kings and nobles, the black superiority was questioned in the struggle towards the French revolution (1789-1794) when this system was overtrown. Just like how South Africa reverted to majority, black rule.

Hey Egmond, could tell us about your devastating evidence that Jane Austen was black?

Hence racism can be deconstructed as an overwrought liberation ideology to free Europe from Black Superiority. Whites are still taught to fear blacks because they were despotically oppressed by blacks, the blue blood nobility and kings.

I prefer the more plausible route of deconstructing racism as a vestigial response to the fear of being attacked by saber-tooth tigers.