I was watching a video about ramen and the host said that most Japanese don’t make ramen themselves – the process is apparently time-consuming and labor-intensive – and just prefer to buy it from ramen shops where it’s cheap and abundant.

What are some other foods that consumers eat routinely (as opposed to say haute cuisine like coq-a-vin or whatever) but that they prefer to pay professionals to cook for them? About the only thing I could think of was bread, which can be made at home but few people do. What else?

I know some people make pizza at home (including, once every couple of years, my wife) but Pizza is definitely an every day food that consumers generally don’t make for themselves.

Most fresh pasta are quite easy to make and inexpensive (flour, water, sometimes egg) but are normally purchased in the US. Similarly most pasta sauces.

Mayonnaise, mustard, ketchup, pickles, butter. Sure, you can find recipes for nearly anything to DIY, but why bother for the everyday stuff that is abundant and cheap.

Fried chicken. Extremely popular in the U.S., both from restaurants, and frozen/pre-cooked, but I suspect that relatively few make it from scratch on a regular basis.

Edit: this cite indicates that roughly half of Americans eat fried chicken at least once a week. 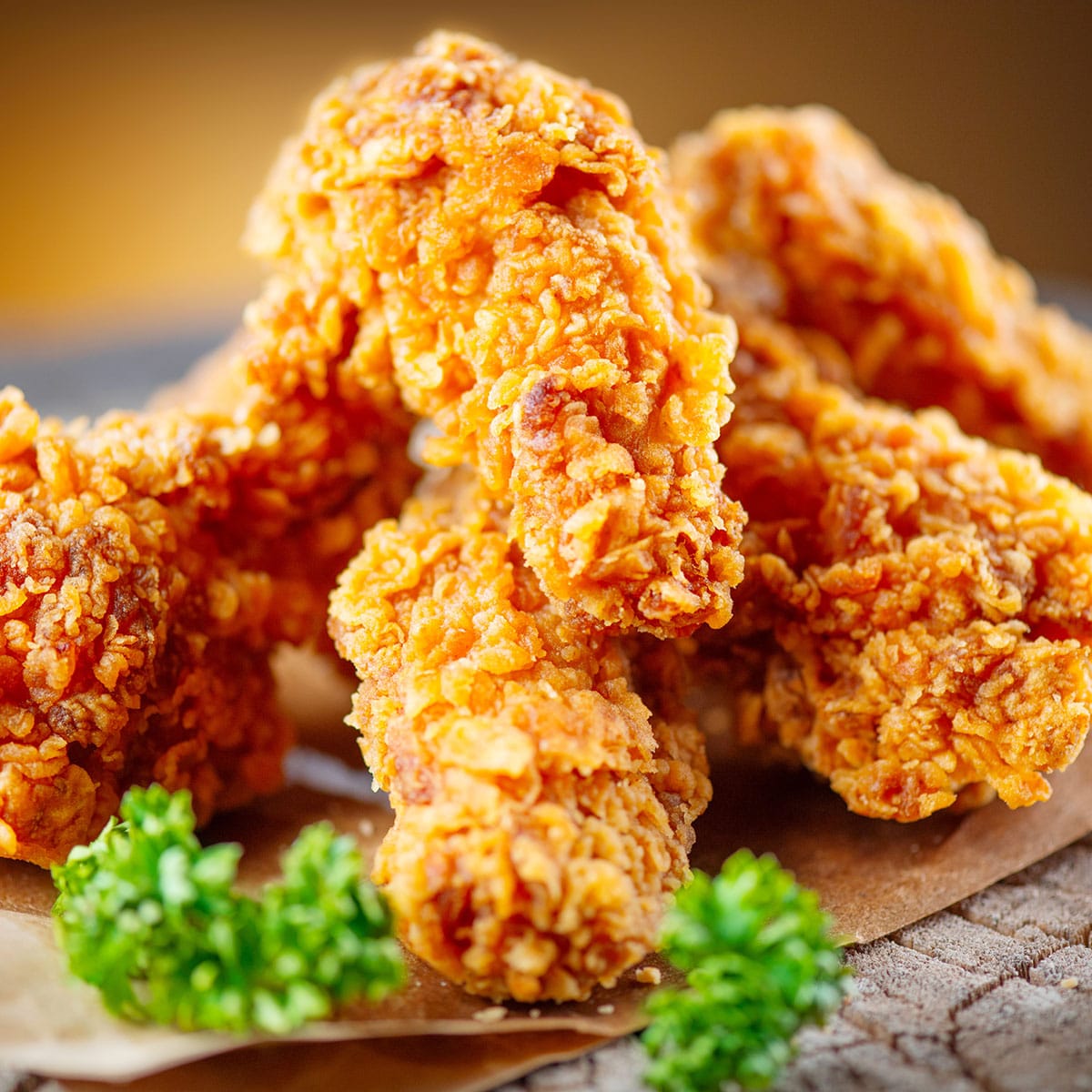 When is National Fried Chicken Day 2018 and how should you celebrate? We've got the best activities, recipes, and deals for you!

In the same vein as fried chicken, I’d say french fries. I’m talking frenched & fried potatoes, not necessarily “oven baked potato wedges.” People know how to make them and I’m sure most home-made ones are miles above frozen or restaurant. But the frozen ones are great and so much easier than actually cutting and frying potatoes. And at least for me, I rarely feel like eating french fries at home, I just get them with my restaurant meals because they’re the default. I would wager that if people are making potatoes at home they are making something different than french fries.

Beer. Once you’ve recovered the cost of the equipment (which is several hundred dollars if you throw yourself into it like a crazy person), it’s considerably cheaper than store-bought, but way too labor-intensive for most people.

Corned beef hash. For every person willing to corn the beef and dice up potatoes into tiny cubes, there are a 1000 that just open a can of Hormel.

Bread products. I love the smell of fresh baked bread, but honestly don’t usually have the time to go through the process. While bread machines provide the smell, the product is underwhelming.

Well, I make bread (challah) every week on Friday, but the first thing that occurred to me was mayonnaise.

I’ve heard people say that home-made mayo is wonderful, but I had some once that wasn’t that wonderful, and have never bothered to try to make it myself. I suspect that I’m so used to store-bought that even the best home-made wouldn’t be to my taste.

Something I made just yesterday is fresh lemonade, and I remembered why I don’t make it more often: with a simple hand juicer, it’s messy and a pain in the butt to get all the seeds out. (I’ve ordered a stainless steel squeezer.) Frozen concentrate is easier, and tastes almost as good, and powdered is even easier, and much cheaper.

BTW, I remember reading an Andy Rooney-esque article 40+ years ago commenting on then-new powdered lemonade products (possibly this specific ad) that treated “old-fashioned lemonade” as though it were something from a bygone era that was gone forever. The writer pointed out that lemons, water, and sugar are still readily available to anyone who wants real, old-fashioned lemonade.

And even more specifically among bread products, puff pastry.

I like a bagel for breakfast. but where I lived at the time the only bagle place worth the effort was 10 minutes out of my way on the way to work, so for an experiment made bagels once,to see how hard it could be.

After much effort and wailing and gnashing of teeth I ended up with a mess of kitchen and 6 really pretty shitty bagels, which after the second day were inedible so 4 went in the garbage after all that.

Beyond something like peanut butter & jelly sandwiches or boxed macaroni and cheese, how many food items are made more often at home than in restaurants? I wonder whether more eggs are fried or scrambled at home vs in restaurants (including things like McMuffins).

In general, anything deep-fried. Deep frying is a pain unless you’re doing a lot of it.

And even more specifically among bread products, puff pastry.

I’ve even seen professional pastry chefs, on TV, saying, “I know how to make puff pastry, but it’s a complete pain in the backside, so I just buy it frozen.”

Tortillas. Simple ingredients, simple to make in theory but why bother when I have about fourteen stores in easy shopping distance that make fresh ones by hand every day? Also tamales. Tamales are theoretically simple but only make sense to produce in job lots and it’s time consuming. While I’m picking up some tortillas I’ll also grab some tamales and maybe a pound or so of carnitas and some refried beans. Mexican food is all pretty easy to make but the time factor is high for most of it. Tiendas RULE.

Jams and jellies. Home made is far tastier, and it’s not terribly difficult to do; plus if you forage fruits, it’s extremely cheap. But I bet I’m in a small minority. I can think of only 3 people I know who also make jams (one of whom, like myself, forages.)

Mayonnaise, mustard, ketchup, pickles, butter. Sure, you can find recipes for nearly anything to DIY, but why bother for the everyday stuff that is abundant and cheap.

I watched a YouTube video where a professional chef made ketchup. He spent several hours making it and in the end said it was not noticeably better than store bought ketchup. He recommended that everybody should just buy ketchup and not make it at home.