What do you do when your car crashes through ice on a frozen River and is sinking? Take a selfie, of course!

Last month I posted a link to a sad story where someone drove into the Niagara River and died with her car stuck on a rock about 20 metres from the edge of the Falls.

I don’t think anyone has posted this? A few days ago, witnesses in Niagara, NY, saw a black sedan floating down the Niagara river towards the fall; it got hung up on something about 50 metres from the edge of the falls. And there was a driver inside it. Cue the US Coast Guard. A helicopter came, hovered over the car, and a Coast guard rappelled down to the car. Once he got there, he went into the car, even though the current could have carried it loose at any moment, and pulled the driver …

This month, from north of the border, we have someone driving at a pretty good clip on the frozen Rideau River near Ottawa.

Until her car crashes through the ice and starts to sink.

Undaunted, the driver does what any young person in the early 21st century would do: climbs out of the car, stands on the trunk, and takes smiling selfies.

Residents of the area, with a slightly clearer idea of the risks the driver was running as her car sank under the ice of a fast-current river, organised a rescue and got her to safety using a kayak on the ice and ropes.

She’s been charged with dangerous driving, a criminal offence. 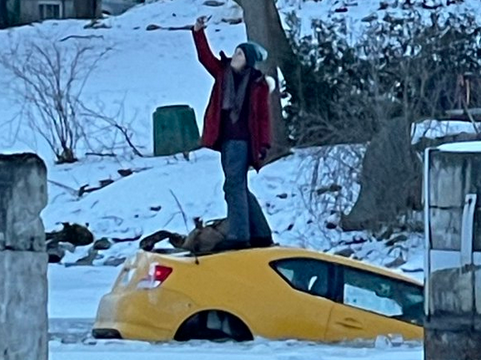 Having been seen driving on the river, she's been charged with dangerous driving

I’m beginning to think the movie “Don’t Look Up” was a documentary.

It seems to me that her best course of action (after the reckless driving, etc. which was obviously dumb and bad) was in fact to stay on top of her car until rescued rather than get down into the icy river. And while taking a selfie is probably not going to help her plight, it doesn’t appear to have made it any worse.

Well, yes, to some extent. But that handy/dandy selfie-snapper could just easily have been used to call 911, which would probably have been a better use of her time. There’s no mention of that in the article.

Could be she did that first. Or one of the many witnesses did so and told her. I imagine that if I crashed my car into a river and, by the time I’d gotten out and onto the roof, I saw a half dozen people watching me, one of them would have called 911 while I was getting out. They’d probably tell me, too, shouting “We called 911” from the banks so I didn’t have to assume or worry.

ETA: I guess what I’m saying is that if I crashed my car through the ice and wasn’t injured or in immediate danger and I could see people coming to help me and I knew emergency services were on the way, I would 100% take a selfie of me on my sinking car. And I don’t think that makes me dumb or a bad person. If I got there by reckless driving, then the reckless driving makes me those things, but not the selfie.

Well I’m sorry, all you selfie apologists, but you are missing the main point, which is our culture has degraded, here’s the evidence! Everything today is worse! And of course, Young People!

…Maybe she was filing a claim?

Maybe she was filing a claim?

Millenials. They can’t do anything except on a phone.

OK, I’ve done my share of stupid, but I’m not sure I’ve ever done anything quite as stupid as driving on a frozen river and having my car fall through the ice. When I think of the stupidest thing(s) I’ve ever done, the LAST thing I wanted to do at the time was record the moment for posterity. Or to smile while doing so.

Who would you ever want to share that photo with, who would say anything other something critical? What non-negative emotions would you derive from looking at the photo yourself in the future?

Moving water is very loud & hard to hear over. Large open spaces, like a person on the riverbank & one standing on her car in the middle of the river also make it hard to hear. I wouldn’t be surprised at all if she couldn’t make out a single word despite seeing the people on the bank moving their mouths.
We have standard arm/hand gestures in water rescue because we assume that the the other members of our team on shore/in water won’t be able to hear our words.

The river was frozen over. Whatever moving water there was, it was almost entirely under the ice. Frozen rivers are pretty quiet.

Who would you ever want to share that photo with, who would say anything other something critical? What non-negative emotions would you derive from looking at the photo yourself in the future?

Have you never told stories about dumb and dangerous stuff you did that you managed to survive by luck? Those are some of the best stories!

Like, I’ve never crashed a plane and I hope I never do, but I bet if I did and walked away from it, I’d tell that story a lot. And if I had a picture of me smiling in front of the smoldering wreckage, wow, that would be a crowd-pleaser.

I think that, if you are standing on a car that just broke through the ice in a river, you ARE in immediate danger. Unless, its firmly lodged and not in danger of sinking. Then, the danger is more like “imminent”. If all you are doing is waiting, by all means, livestream! I’d love to see the expression on your face when the car shifts.

Wouldn’t you want to be away from the car, standing on some unbroken patch of ice?

I honestly don’t know what the right thing to do in that situation is, but I am inclined to think that if you can see people organizing a rescue with a boat, staying on top of the not-yet-sunk car is probably a decent choice, since most of the others involve you potentially entering a very cold river and risking drowning or hypothermia.

Wouldn’t you want to be away from the car, standing on some unbroken patch of ice?

I mean, if you knew it would work for sure and the ice wouldn’t break. What are the odds that if you try to jump from the car to the ice you end up in the water? Not zero. I think it’s pretty easy to Monday morning quarterback this kind of thing, but if she had made a jump for it and missed, would we maybe instead be reading a story about the dumb person who jumped into a frozen river instead of just waiting while the boat came to get her?

If it turns out the boat couldn’t reach her in time, did she lose anything by staying on the car for a while and then trying to jump for the ice? Certainly staying on the car could turn out badly. How sure is anyone that there’s an obvious best choice here, and that you would figure it out and do it in that situation? I am not at all sure.

Yeah, the selfie I have no problem with. At that point, might as well. I would have probably done the same. But not the driving on a frozen river to begin with. That was a dumb idea all around.

The river was frozen over. Whatever moving water there was, it was almost entirely under the ice. Frozen rivers are pretty quiet.

My second sentence was about large open spaces. Try standing at home plate & see how well you can hear understand someone in the outfield

Yeah, the selfie I have no problem with. At that point, might as well. I would have probably done the same. But not the driving on a frozen river to begin with. That was a dumb idea all around.

Seriously, don’t ice fishermen do this somewhat regularly? Of course they probably test the ice thickness first before venturing out with their vehicle & then probably only drive ⅓ km to get to their fishing hole, which means less likely for dramatic condition changes in the ice.

I might not be understanding exactly how this went down. I imagined her stepping out of her car onto some ice, then climbing atop her car. If instead there was no intact ice that she could step on, and so she climbed from her open driver’s side door (or sunroof?) directly onto the roof of her car, that would make a lot more sense.

when this happened I was reading the news story and one of my smart-ass relatives was walking by and saw the pic and remarked "the ice road trucker audition didn’t go as planned eh? "

Seriously, don’t ice fishermen do this somewhat regularly? Of course they probably test the ice thickness first before venturing out with their vehicle & then probably only drive ⅓ km to get to their fishing hole, which means less likely for dramatic condition changes in the ice.

Yes, and some of them fall thru the ice every year too. It doesn’t help that besides the weight of the pickup, ice houses have gotten larger. I have a friend that has one called a Ice Castle or Ice Palace. Huge, has heat so you can fish without all the heavy clothing. Grill so you can cook inside. You could live all winter in the thing as long as you could refill the propane tank.

Had one here just a couple weeks ago when a pickup fell front first thru the ice with the backend still on solid ice. The passenger got clear but her husband, for reasons unknown, never got out.

Also, if people icefish above moving water like a river, they usually stay closer to the shore. Lakes, with relatively little current, allow ice to be a more consistent thickness.