What does "nerd" mean to you?

What does "nerd" mean to you? In My Humble Opinion (IMHO)

The original use of the terms went something like this: nerds are uninteresting (Potsie was a nerd - not smart, not obsessed with any particular topic, just dull), geeks are revolting (sideshow chicken head eaters were geeks). Obsessive interest in a topic can be both uninteresting and revolting, so a lot of people were both geeks and nerds by those definitions. These days, the terminology has shifted of course, but sometimes you still see the original uses popping out.

The only source I trust is If I Ran the Zoo.

This tells it all: 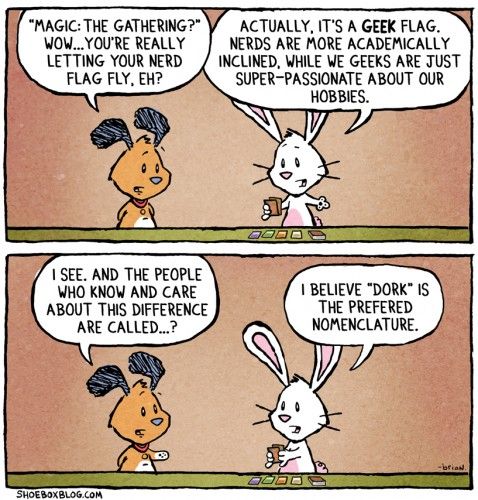 ETA: now I ask myself: am I a nerd, geek or dork for posting this?

I was going to make a joke about the candy Nerds, but then I had a vague memory that the same company also came out with a variety of candy called Geeks. Or did they? Googling gives me nothing. Did I imagine this?

My friends are generally academically inclined and range from the teens to … my age. We affectionally call each other nerds when being particularly … nerdy … about maths, or stats, or tabletop games. I personally don’t think there’s more than a sliver of “you’re socially awkward, ha ha, just kidding” in that usage, but you never know exactly what lies in the hearts of men.

YMMV thought, they’re terms that have changed a lot over the last couple of decades. 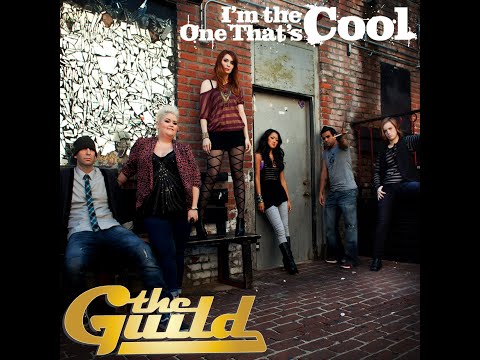 ETA: now I ask myself: am I a nerd, geek or dork for posting this?

If I recall my junior high days correctly, this makes you a dillwad.

When I was a teen, the popular depiction of nerds in movies and TV was not how I saw myself, I didn’t dress in weird ways or have a stupid laugh or get bullied with “kick me” signs stuck to my back, but it was clearer in hindsight that is what I was. I was more of a geek, in that I obsessed over Star Wars or computer games or comic books or animated TV shows, but I also was very good at maths, wrote weird stories, and drew cartoons. I was both geek and nerd, painfully shy, socially awkward, desperately anxious, and quite lonely.

And I still am all those things.

The original use of the terms went something like this: nerds are uninteresting (Potsie was a nerd - not smart, not obsessed with any particular topic, just dull)

That doesn’t completely disagree with my present day definition of nerd. IMO, one can be smart and get good grades without being a nerd. But a nerd is someone who prefers more “intellectual” pursuits. They’d rather read a book, or play chess, or write computer code for fun, or just stay home studying rather than going out to a party. And the people who like going to parties would probably consider that person dull.

It doesn’t have to be an either/or scenario.

Put me in the nerds are the good grades and super smart camp while geeks are folks who obsess about their passions. That’s how the term was always used in my circles. MMV of course, as these things often do.

These have long been my classifications:

A nerd is somebody smart and studious - think a stereotype with thick glasses always reading a book. So a person can be a nerd about certain things if they are very interested in, or well versed about, some subject (in the JFK thread, I described myself as a nerd on the assassination), but it doesn’t preclude somebody from also being cool, attractive, or tough. Fantasy football types (myself included) are football nerds.

A geek, traditionally, was somebody who bites the head off a live chicken. So, unlike a nerd, a geek is awkward and maybe a little uncomfortable to be around - think the person who always has food in the teeth, or their clothes don’t match, or they didn’t master all of the grooming skills. It’s hard to be a “hot geek”, whereas nerdiness is often lauded as sexy.

A dork, meanwhile, is clumsy or goofy. Makes dumb jokes. Trips a lot. Dorks can be funny, so it’s sometimes endearing.

That works for me.

Although I’m sometimes puzzled by those nerds who take things too far. How many threads have we had here where Star Trek is mentioned in a Cafe Society thread that has nothing to do with Star Trek, but has to do with one of its plotlines? At that point, the Star Trek nerds/geeks/dorks take over, nitpicking like crazy, and the next hundred posts have to do with Star Trek. No thanks.

It’s the same with Dune, Lord of the Rings, Star Wars, Starship Troopers, and similar. I’m reminded of the nerd on the Simpsons episode who called out the producers of an animated show because two different bones produced the same music. Jeez, buddy, just deal, and enjoy the show. Don’t nitpick, and don’t constantly remind those of us who enjoyed the show that we’re “wrong” somehow…

While I know some people make distinctions (for me, if I sense one, it’s that nerds are the more intellectual, socially awkward ones, and geeks are more the ones who are just very obsessive about a certain area of interest), in practice, I very rarely hear a clear-cut distinction (and, with reading some of the replies above, it seems people even have it opposite of how I’ve generally heard it when a distinction is made. I’d even say being a nerd does not necessarily indicate high intelligence, but more social and physical awkwardness.) Like I love languages and words, and I’d equally call myself a “word nerd” as much as a “word geek” (with a preference for the former, due to euphony.) Someone who is into sports and statistics, I’d likely call a “stats geek,” but “stats nerd” doesn’t sound in any way off or really different to me. So while the Venn diagram may not be a single circle, there’s significant overlap in how I observe the word used in real life, despite any comics, charts, and verbal explanations to the contrary.

I endorse this taxonomy.

I’ve long believed that “geek” and “nerd” don’t have any clear differences. They may have evolved separately, but came to mean the same thing. But, people being people, they had to try and come up with some distinction. But no one could ever really agree on it. It wouldn’t surprise me if some people just though one word sounded better, and thus declared the other one to be the one that was uncool.

That said, I’ve not ever understood either term to mean merely lacking in social grace, etc. as in the quote in the OP. Both always involved being really smart or knowledgeable about something. Otherwise you’d just be a “weirdo” or “loser” or something.

Lots of overlap. Just as another data point, the Debate Team I coached for 35 years once proposed getting shirts that said:

IMHO a geek is someone who is really into a particular subject, whether it be football, D&D, or astrophysics. A nerd is someone who is socially awkward and tends to focus on activities that are more easily enjoyed alone. Given it’s inherently social nature, I’d say people who are really into D&D are geeks, but not nerds.