What does "nerd" mean to you?

Continuing the discussion from Can an actor who is a RL nerd play a cool character?:

Can an actor who is a RL nerd play a cool character?

The above quote is not how I use the term “nerd”. To me, a nerd is someone who obsesses about all the gritty, nitpicky details of a topic, particularly a topic that doesn’t have wide appeal. While some nerds may be socially awkward, it’s not the defining feature.

To me, a nerd is someone who obsesses about all the gritty, nitpicky details of a topic, particularly a topic that doesn’t have wide appeal.

I’m more in @folly’s camp, Geeks are obsessive with certain subjects (often non-mainstream traditionally). Nerds are generally socially awkward, and often compensate with attempting to excel in non-social fields, often academics. Not that there isn’t a ton of overlap of course.

I think of famous ‘geeks’ that aren’t nerds, like Vin Diesel, a known gaming geek, but few would consider him a nerd.

Heh, I feel exactly the opposite. “Geek” implies high intelligence, while “nerd” doesn’t necessarily. Both imply a lack of social skills and personality when used as stand-alone words. Both can also take the connotation of obsessive interest in some sort of (usually obscure) topic, but in that case there’s a necessary (though sometimes implied) qualifier denoting the exact topic; as in “If you are reading this thread, you are probably a linguistics nerd”.

The thing is we can all find online definitions that support our point of view. Trust me, I’ve geeked out about this…

Geeks collect things, are big fans of games, comics, etc. are often bright and colorful, and often come across like they’re still in middle school.

Nerds are big on math, wear bland clothing with a focus on practicality, and try to come across like they were born already 40 years old.

They’re all interchangeable, but various dorks, nerds, dweebs, and nerds will claim there’s some difference.

I think it’s more a fashion change in the subcommunity. Nerds had their heyday from the 50s to the early 80s. The geek look took over and is now the dominant style. You don’t really have nerds anymore.

I feel the same way as the OP. Nerds can be cool. Although, I’d say “Cool Nerds” tend to be female. At least as far as fandom goes and movie and TV roles go.

I think the term “nerd” has undergone some evolution over the past few decades. If you go back aways (say, to the time Revenge of the Nerds came out), a cool nerd would have been a contradiction in terms. But in recent years it has become more cool to be a nerd.

The way I heard it explained agrees with @Folly and @ParallelLines . “Geek” does not really have positive connotations, think Nightmare Alley, even if unconsciously. (Though I met someone who likes the LARP and such who insists she is a geek and proud of it!) A physics nerd might eventually be nominated for some Nobel prizes, but no prize for being a geek and playing D&D, type of thing. Geek is more like freak or anorak.

Yes, the type of person who would be caricatured as wearing them (Wiktionary claims e.g. trainspotters). It’s a stereotype. Or are anoraks more like nerds now? I confess, I’ve confused myself. Wiktionary links to a Archives | The Septic's Companion which equates it with geek.

Years ago I took an online test to determine whether I was a nerd, geek, or dork. The test claimed I was a dork, but I identify mostly as a nerd. I mean, I majored in computer engineering in college. There aren’t many majors more nerdy than that.

The original use of the terms went something like this: nerds are uninteresting (Potsie was a nerd - not smart, not obsessed with any particular topic, just dull), geeks are revolting (sideshow chicken head eaters were geeks). Obsessive interest in a topic can be both uninteresting and revolting, so a lot of people were both geeks and nerds by those definitions. These days, the terminology has shifted of course, but sometimes you still see the original uses popping out.

For electronics, geeks are people who are obsessed with the latest gadgetry. Nerds are people building circuits with soldering irons. 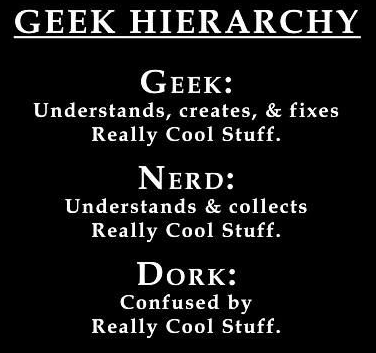 So, even the last two posts contradict each other handsomely, and there really is no consensus.

To complicate things further, I just watched the original (1947) version of NIGHTMARE ALLEY, and in that a “geek” was a guy in a carnival who ate live chickens for people’s entertainment.