What is the biggest event that is accepted by all conspiracy theorists at face value?

First off, I recognize that conspiracy theorists don’t ascribe to all CTs. Someone who believes 9/11 was an inside job may not think the Moon landing was faked, for instance.

That being said, it seems like no major world event has been conspiracy-free. JFK assassination? Wasn’t Oswald alone; a bigger plot. Pearl Harbor? Roosevelt let it happen. Moon landing? Faked. 9/11? Inside job. Sandy Hook? False flag. Covid-19? Plandemic, vaccine must be Mark of the Beast. Biden wins election? Stolen. Earth is round? Not! Flight MH370 disappears? Aliens took it. QAnon. Climate change? Hoax. Cancer? Big Pharma is sitting on a cure but won’t reveal it.

So the question is…what is the biggest thing or event that is accepted by all conspiracy theorists at face value, no questions asked?

How would it be possible to even recognize this? If CTers believed in something, then they wouldn’t be talking about it. I’m sure if you brought up even rather obscure events you could find CTers that would dispute it.

I guess the Second World War (that it existed, it’s causes and consequences will of course be riddled with conspiracies).

There are folks who believe Paul McCartney died in a car accident fifty years ago. And the man who has been performing ever since is a body double who took over the identity to not break the hearts of millions of Beatles fans.

So with that all said the fact nobody as far as I know has doubted John Lennon was killed on the night of December 8th 1980 by a lone wolf lunatic fan might count as one.

Take any two solipsists, and the entire universe is excluded.

A common mistake that people make when trying to design something completely foolproof is to underestimate the ingenuity of complete fools.

Very, very old events tend to be safer from modern conspiracy theorists. Nobody believes Julius Caesar survived his assassination attempt and escaped to Han China, for instance, or that the Plague of Justinian was an inside job. Not entirely, though: see anything regarding the pyramids.

If you mean events in living memory then the water’s murkier. Chernobyl tends to be conspiracy free, from what I can tell - it’s pretty much accepted that the Soviets screwed the pooch due to incompetence and fear, and no one is running around saying they embarrassed themselves intentionally. Stretching slightly passed “living” memory, the assassination of Arch-Duke Ferdinand was a conspiracy, but nobody seems to blame it on the banks or anything.

Come to think of it while there are many Moon landing hoax theories out there regarding Apollo 11, I think it is accepted Apollo 13’s malfunction on the way to the Moon and the subsequent aborted mission/return flight was hanging in the balance and close to ultimate disaster. As opposed to a manufactured crisis engineered to be a “heroic failure” with the crew in cahoots to drum up worldwide attention once again to the space program.

Stretching slightly passed “living” memory, the assassination of Arch-Duke Ferdinand was a conspiracy, but nobody seems to blame it on the banks or anything.

On the other hand, there are lots of conspiracy theories about WWI, especially the “stabbed in the back” myth that attributed Germany’s defeat to the Jews and others.

I guess the Second World War (that it existed, it’s causes and consequences will of course be riddled with conspiracies).

The original Youtube channel is gone, but based on this reddit thread, at least one guy was saying just this about 6 years ago:

Regarding Apollo 13 and Julius Caesar and most ancient events, the most famous conspiracy theories involve the most famous events. If the average schlub doesn’t know about it, then what’s the fun (for the Conspiracy Theorist) in knowing the Hidden Truth?

So, the events that get the most play are the moon landing, 9-11, the Kennedy assassination. Apollo 13 was just a blip, compared to Apollo 11.

There does seem to be an exception for grand theories of world wide control; Knights Templar, Masons, Jews, Illuminati. Those attract the historical specialists.

Seems to be a lot of flat earthers out there, at least judging by the Netflix doc ‘Behind the Curve’. Historically speaking it’s something people have believed longer than any of the other CTs, even though learned people have known the Earth was round since at least the time of the ancient Greeks. So I think it’s a winner just on duration of belief.

What I never understood, and I don’t remember if it was touched on at all in the Netflix doc is, why do flat-Earthers think others believe Earth is an oblate sphere? Do they think all the ‘roundies’ are just wrong, or is there some sinister reason the flatness of the Earth is being covered up by the round Earthers? And what is that reason? WHAT IS IT???

Having tangled with more than a few CT enthusiasts, I can only say they tend to have different versions to explain their own pet theories, so perhaps the “face value” part does not apply.

As for the biggest CT, I dunno. How do you measure them? Percentage of rubes that believe a particular one?

So with that all said the fact nobody as far as I know has doubted John Lennon was killed on the night of December 8th 1980 by a lone wolf lunatic fan might count as one. 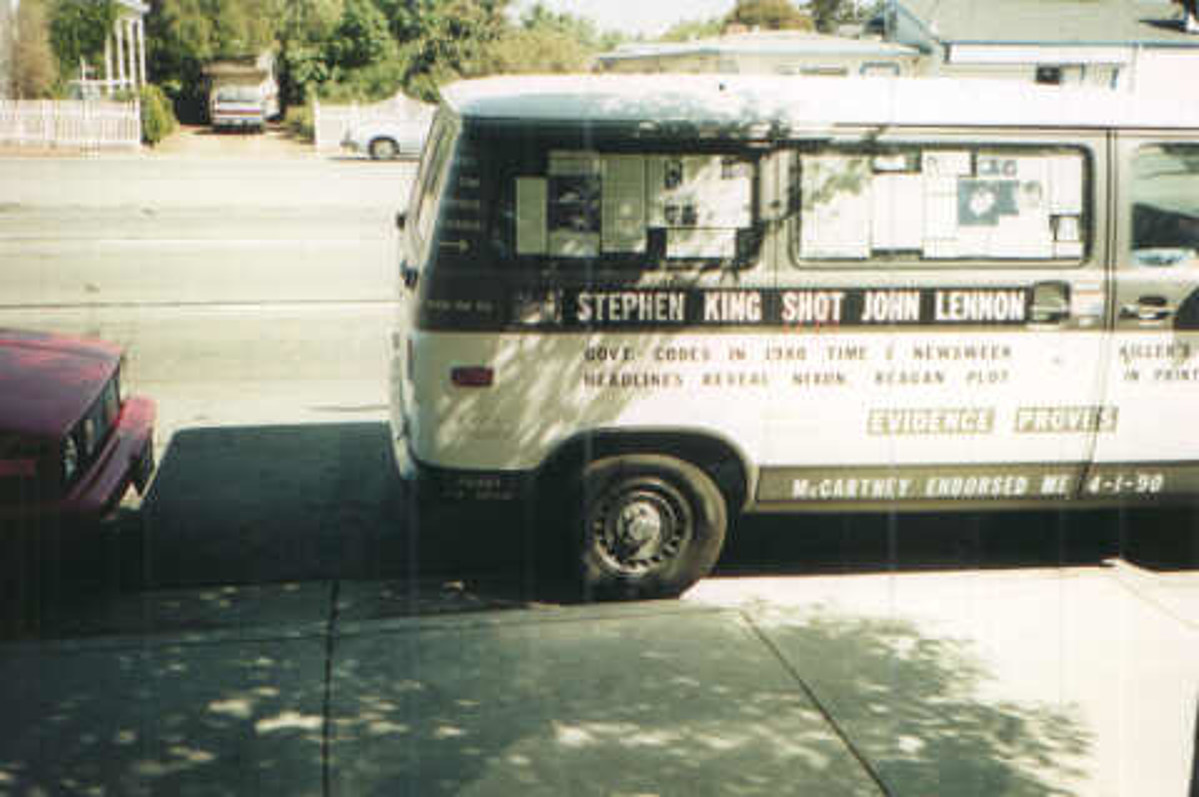 I was walking through the parking lot, and saw this van with photos and writing on the side. In giant letters on the side it read: STEPHEN KING SHOT JOHN LENNON.

We all agree Elvis is still alive right?

That Jesus walked on water?

Of course, there are conspiracy theories about Jesus too, notably The Passover Plot, which claims he faked his own death and subsequent resurrection.

The only conspiracy theory that I think might, just might have something to it… is that Oswald did not act alone. It always seemed pretty fishy to me that Oswald was killed by Jack Ruby, a nightclub owner with alleged mob connections. I don’t know how reputable this website is, but submitted for your consideration:

Did the Mob kill JFK? New evidence suggests they did.

Sorry if that’s a slight hijack-- I thought about starting my own thread “I don’t believe in CTs. Well, with the possible exception of…” But I doubt there are many CT believers here, so it probably wouldn’t amount to much.

I don’t know that much about the flat Earth conspiracy theory, so I might be wrong on this. But I would say the existence and dimensions of outer space. I don’t hear anyone questioning the fact that the little pricks of light we see in the sky are actually huge masses that are very far away. The fact that the sun is of gargantuan dimensions, that the moon is reflecting light from the sun even though we can’t see the sun right now, stuff like that.

I think what makes the acceptance of this so impressive is that it is not easily verifiable. I mean, sure, you can do the calculations according to physics and what not. But, well, if you don’t believe China exists, you can travel to China and confirm that it exists. But it’s awfully hard to actually go into outer space and confirm that the sun, the moon, and the stars truly are what science says they are.

An awful lot of people find something wrong with the official explanation of the Kennedy assassination, but generally don’t believe the major conspiracy theories. You mentioned what are probably the most common beliefs, that neither Oswald or Ruby acted alone. But not everybody thinks that means the FBI and CIA were part of the conspiracy or coverup. Many people just believe the authorities weren’t competent enough to find all the details or covered up their own unintended involvement.