What Is This Drinking Vessel Called? I Want One!

This woman is drinking out of a strange but beautiful drinking vessel in a Spanish town. What’s it called? A porró is a traditional glass wine pitcher, which holds 0.75 litres (25 US fl oz) typical of Spain, originating in Catalonia, in northeastern Spain, and eventually spreading to other parts of Spain. This invention allows everyone to drink from the same utensil without touching it with their lips. It fosters communal drinking accompanying food, though it does require some skill to ensure the wine enters one's mouth and to keep it from spilling onto clothing. Some might say it resembles a To drink...

I think we can safely say that’s it! Thanks!

My first experience with those was when skiing in New Mexico. They had martinis in them.

Was a different time. I had no idea it was a Spanish thing (the decanter, not the drink).

Spain has given the world two drinking vessels, though the world insists on largely ignoring them: the porrón and the botijo (good luck pronouncing that one

Boh - Tee - KHoh).
The first is the one you mentioned, it is usually filled with wine or a mix of wine and sparkling water. Orwell mentioned one in his Hommage to Catalonia, it was filled with white wine and it made him think of a bed-bottle, he was quite disgusted. Squeamish Brit…
The other is the botijo, it is similar in its desing, but it is only used to drink water: it has a broad opening on one side to fill it up and a narrow exit at the other to drink. When pouring, the narrow exit makes a thin straight beam and when you master it you don’t get wet when drinking. Children’s play, actually. Harder for grown ups, but funnier for onlookers.
The magic of the botijo (not the porrón!) is that it is made of porous clay so that once filled, it cools the water that it contains, acting as an evaporative cooler. That works even in the midday Spanish sun, when only mad dogs and Englishmen (see: porrón filled with white wine)… In the Spanish wikipage for botijo they have included a section about “Física, química y matemática del botijo” where they seriously explain how it cools. With formulae! Cool!

It looks like a glass bota bag, at least in principle.

I’m sure that was the inspiration, since bota-like containers have been used for wines (and other liquids) since pre-history. 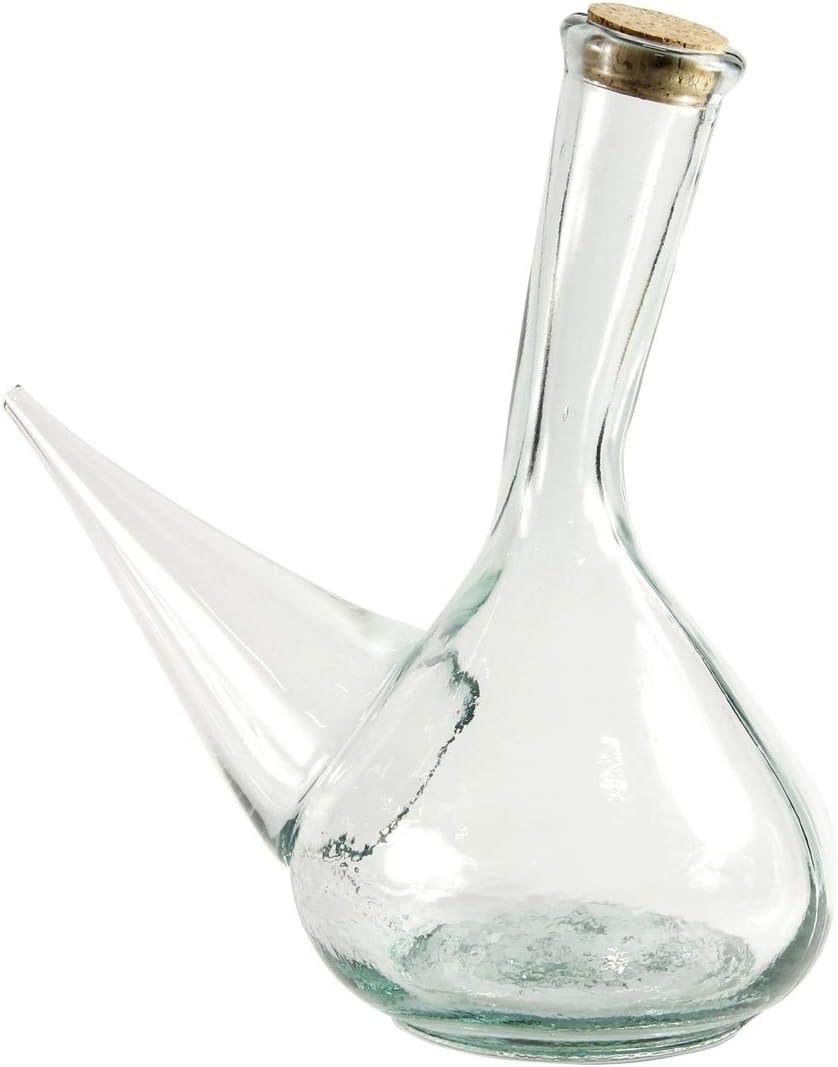 The porron wine pitcher is a festive way to serve wine or sangria. Just pick up the porrón and tilt it so that a thin stream of wine pours directly into your mouth! It takes some skill, but it is fun at a party to see how well you and your friends...

That is absurdly expensive! In amazon.es you get them for a 1/4th of the price.

It looks like a glass bota bag , at least in principle.

Not really: a bota squirts the liquid through pressure, you squeeze it out. A porrón lets the wine flow. But in one respect you are right: Spain has given the world three drinking vessels, not two, as I stated. The porrón, the botijo and the bota. And all are used contactless overhead, very suited for sharing. Spanish drinking is social drinking!

There used to be a good restaurant called “El Porrón” in NYC. Their logo was a porrón:

Unfortunately they went under during the pandemic.

My first experience with those was when skiing in New Mexico. They had martinis in them.

In case anyone thought I was making thing up (because how often do we find martinis in the wild): 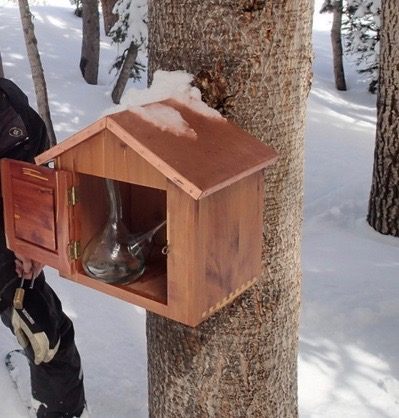 To Calm Anxious Skiers, This Resort Hides Martinis Along the Slopes

The Tree Martini is a 60-year-old tradition in Taos, New Mexico.