What is this possibly fictional tool? (Mortar mixer?)

I saw some sort of sifting/churning device in a video game and wondered if this was a real tool:

The game (not important) is set in generic medieval times, and this was near a site of construction.

My guess is some sort of grain mixer (why would you do that?) or perhaps a mortar mixer? Random Googling found this medieval mortar mixer, which looks a lot like the one in the game…

Was that a real tool that people used, or is it a fanciful modern-day reimagining?

That’s kind of a generic large-ish mixer (well, large compared to a hand-held kitchen type mixer). You could mix other stuff as well, though there isn’t all that much stuff that you need to mix in batches big enough to require a two-person mixer.

If it’s close to construction, it’s almost certainly supposed to be a mortar mixer. They were commonly used when building castles and churches. There should be one person on each end of the beam pushing it around, and possibly a third person throwing stuff into the big bowl. It wouldn’t be left unattended like that, especially with freshly mixed mortar still in it. They only have so much time to get the mortar out of there and onto the building before it sets up.

The thing is, these types of mortar mixers were temporary. They would usually dig a pit next to the construction site, then build the wooden bits and mix up the mortar (in very large batches because they were making something big), and then when they were done they’d fill in the pit and move on. The one in your screen capture looks like it has a stone base, which wouldn’t typically be used.

A large mixer like that with a permanent stone base would be more common in something like a tile manufacturer, who used the mixer to mix up clay which would then be formed into tiles and fired in a nearby kiln. This would be a permanent setup and wouldn’t be next to a construction site.

Another design for mortar mixers is to replace that main beam (which is obviously designed to be pushed by two people, one on each side) with a pole or beam attached to a horse or some other beast of burden.

A similar device was used to mill grain, but instead of having a big bowl and stirring rods, you’d have round stones used to mill the grain attached to the crossbar. But it’s the same basic idea. You have a large cross-beam that can be pushed by two people (one on each side), or a slightly different design with a beam attached to a horse or some other beast.

I went poking around on google and found a youtube video showing some researchers experimenting with this type of mixer:
https://www.youtube.com/watch?v=e9RRhL7Yn-0

since the question appears to have been answered, I’d like to ask some of my own.

Awesome, thanks! It looks like whoever built that thing in the game might’ve actually done some research, then. It’s always neat when games teach me accidentally teach me something new. Funny part is I walked by that thing a hundred times without even seeing it (it’s in a heavily-trafficked square) until one day I was bored, standing around and saw it right there in plain sight.

since the question appears to have been answered, I’d like to ask some of my own.

She’s my character. I play an alcoholic vampire sorceress. She goes around sucking blood and getting drunk and casting spells. Her name is Blood Alcohol Content, but people call her BAC for short, lol.

The mug is empty because she finished her last pint. If you wait a few seconds, she’ll automatically pour herself another out of ether. She just keeps summoning beer out of thin air (my kinda gal).

She’s wearing that fancy dress because it was a social experiment on my part. I’ve often played female characters for fun, and wanted to see how clothing would affect other players’ behaviors toward me. Not long after I put it on, some guy ran by and handed me 50,000 gold, the equivalent of some $3 USD in real-world money. Others started dancing and making lewd comments. Sad. But there ya go

This is what she does when she’s not checking out mortar: 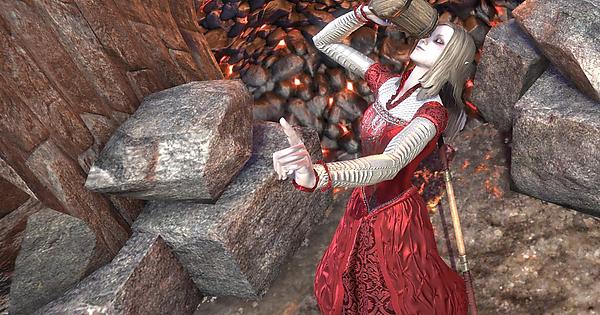 This is what she does when she’s not checking out mortar:
http://imgur.com/a/nspaw

The lady appears to have a drinking problem of the Leslie Nielsen variety.

The lady appears to have a drinking problem of the Leslie Nielsen variety.

I was thinking more Sterling Archer.