What kind of frog is it?

Sorry I don’t have a pic, just a description. I remember going canoeing in the Adirondacks in New York State ten or fifteen years ago–we went down a river in an open, marshy area, with small sandy areas at certain bends in the river where we stopped to picnic. On the sand were tons of tiny red frogs. Maybe the size of a coin or the size of the first joint of my thumb. I’ve tried looking up the various species of frogs and toads that live in the Adirondacks, but I haven’t found anything that’s similar to these miniature red frogs. Anyone have an idea?

I’d just like the suggest the title of this thread be used for a new (but I expect short-lived) game show.

Possibly very young American toads (Bufo americanus); they sometimes have a rusty-brown color. When I was camping in Ontario, the toads were noticeably redder than the toads of the midwest. So were the garter snakes. Wonder why that is.

Spring Peepers can be brick red or pink, and are quite small: 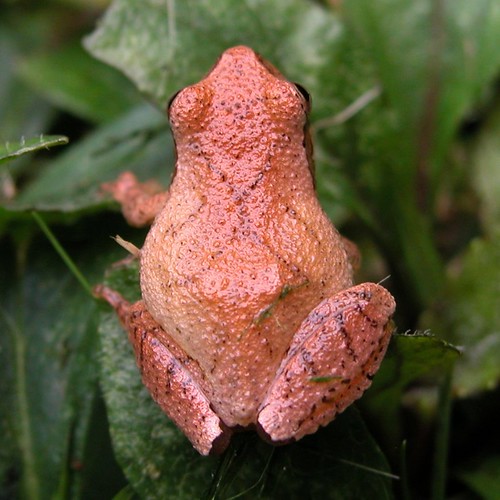 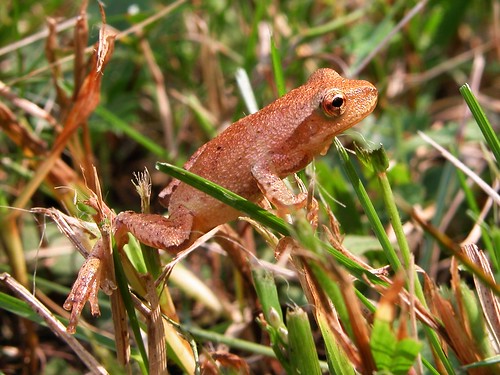 However, without a better description it is difficult to be sure what they were.

Adirondacks I’d say it was a Wood Frog . They make a hell of a racket in the early spring. They also cluster like you describe.

It is a site devoted to monitoring wetlands and conducting a “frog census” is an excellent way of doing that. The site is searchable by state and includes not only photos, but calls as well.