What should I do with this turkey?

I’m totally responsible for cooking the Thanksgiving turkey for the first time. It’s 15 lbs and it’s still in the freezer. I bought a disposable roasting pan and a pack of oven bags. Now what? Should I thaw it out today? Please don’t say I’m going to need to stand in the kitchen for hours basting the turkey.

Take it out of the freezer and put it in the fridge.
As for preparing I’m a huge fan of Alton Brown’s recipe (as are a lot of people since it’s Food Network’s number 1 Thanksgiving recipe).

If you brine it ahead of time you won’t need to baste and you’ll still have a juicy bird. And don’t worry about the oven bags either (although keep it covered in foil or roasting pan for most of cooking.

When will you cook it? It will take about 3 days to thaw in the fridge; if you need to force-thaw it the day you cook it, do so in a sink full of cold water.

The Butterball Hotline (which is now also online) has said many times that their callers are mostly middle-aged women who’ve never done it and are too embarrassed to admit to their friends and family that they have a question. “All Things Considered” usually goes to them on Thanksgiving and/or Christmas, and the strangest question I can remember is this: “I know you’re supposed to thaw it in water, but my sink’s full of dirty dishes so I put it in the toilet. How often should I flush it?”

I second the brining recommendation. And, yes, you should get it out to thaw today. Make sure you put it in a pan or something so the blood and juices don’t get all over the fridge.

We did this last year for our ‘no basting’ solution. Worked great. We even used dried herbs instead of fresh.
Scroll down a bit for recipe past the pictures. 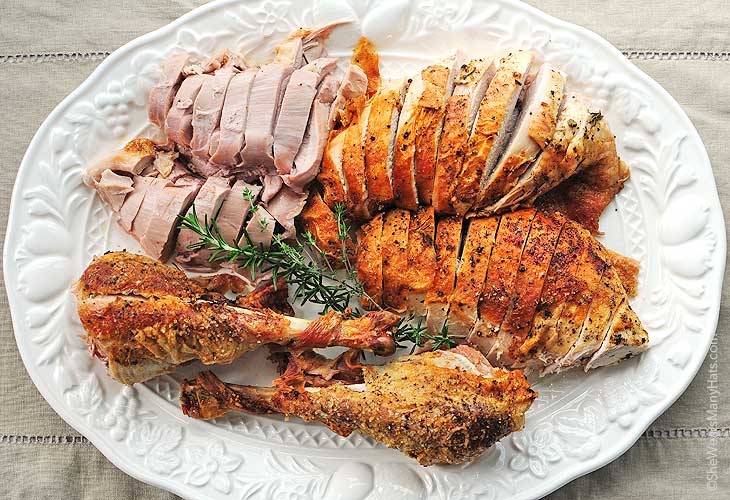 This recipe I'm sharing with you today for a Mayonnaise Roasted Turkey definitely calls for less. It's pretty straightforward. And no, it doesn't taste like mayonnaise. This is just one of the methods we use, but after great results each time, moist...

From a recent article about roasting a turkey:

Turkey should be at room temperature before going into the oven
Dry bird inside and out
Salt inside the bird
Use roasting rack
475 for 30 minutes, then 350
Don’t turn down the oven if bird gets too brown – put foil on it
**Don’t baste, don’t open the oven to look at the bird
**Thermometer goes between the leg and the breast
For a 14- to 16-pound turkey, check the temperature after 2.5 hours. For an 18- to 20-pound turkey, check the temperature after three hours. If it isn’t done, check again every 15 minutes.
Roast to 160 or 165
Let bird rest 15 minutes before carving
Carve half at a time – half the breast, one leg and one thigh

The article recommended against basting, because the oven loses heat every time you open it.

Also, if you bought a Butterball, it’s already brined, slightly.

Don’t rely on the pop-up thermometer.

Before I got a thermometer, my test was to move the drumstick, and if it moved easily, the bird was done. But a meat thermometer is best.

I’m cold-brining and spatchcocking my turkey this year…nothing like trying two new things at once on Thanksgiving! 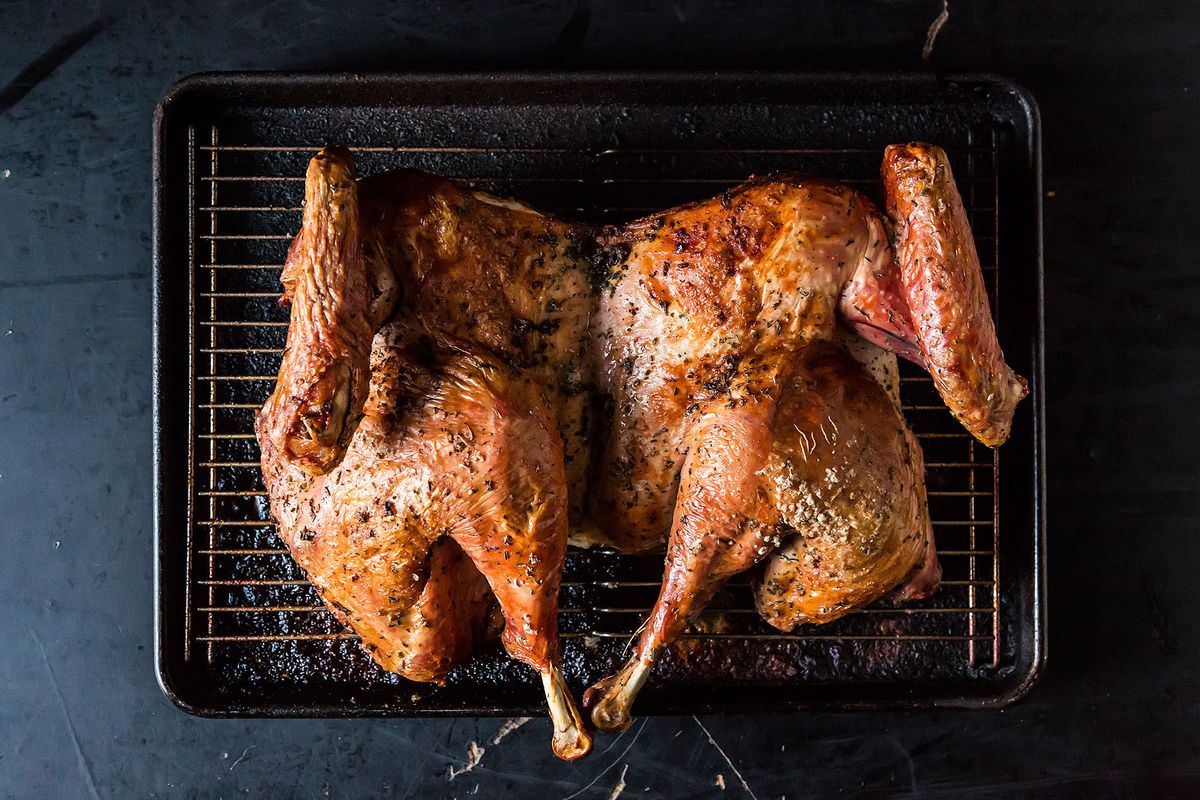 If you use the oven bag, you don’t need to baste. I love using oven bags for turkeys. They turn out perfect every time. The juices are self-contained in the bag. All you need to do is add corn starch and bring to a slight boil (in a pot of course). The clean-up from using oven bags is way easier too.

Usually we make home-made stuffing from scratch. This thanksgiving (our was October) I just bought a box and used that. Easiest damned turkey ever.

Definitely no on the basting.

Not only does the oven lose temperature, but so does the turkey! The water in the basting liquid evaporates off the turkey, causing it to heat more slowly or even lose heat. I would only baste if your goal is to slow down the cooking. (That might be a real goal - if your guests are going to be an hour late, baste away.)

I thaw my turkeys by taking them out of the freezer the night before and allowing them to thaw in the garage. At this time of the year, the garage is usually somewhere in the low 50’s F so it’s warmer than a refrigerator. In the morning, the turkey will still be mostly frozen. At that point, I put it in a cooler and bring it upstairs. I can open or close the lid of the cooler to control how fast/slow I need it to thaw over the next five hours or so. If the turkey thaws too quickly, I can put ice in the cooler and close the lid to keep the turkey cold. The cooler also prevents turkey juice from leaking anywhere. (If I brine, I do it in the cooler at this stage, but I usually don’t bother.)

As for cooking, get a good black glazed metal baking pan. These help it to cook faster and more evenly. Get a good meat thermometer and pull the turkey out at least 5 degrees before it’s “done” - internal temperature will continue to increase about 10 degrees before it levels off and starts going down. Don’t trust the pop-up. Don’t follow cooking time instructions on the turkey. Trust the thermometer.

Watch that thermometer before you cut the turkey too - if the temperature hasn’t started going down, cutting it will just cause the juices to run all over and the meat will be dry no matter how well it was cooked.

I don’t bag or cover my turkeys. My wife is a firm believer in foil over the pan, but I still insist on taking it off halfway through the cooking. Moisture is a result of cooking and cutting temperature more than cooking method. (For an example, my smoked turkeys spend 8 hours cooking with no covering at all. The skin is beautiful and crispy, but the meat is as moist as you could ask for.)

My wife and I season the turkey with rosemary, celery and onion stuffed in the cavity, and with Lawry’s seasoned salt and pepper on the outside. Keep it simple.

I swear by oven bags for turkey.

My one piece of advice is to make sure you remove all of the extras hidden in the bird. There should be a neck and a bag of organ meat. Different brands handel this differently, so check both ends of the bird.

One way I’ve heard to do it, and may have tried but can’t remember as I do turkey so rarely, is to cook it ‘upside down’ (back up) so the back fat melts and runs down and bastes the turkey.

Put the turkey in the fridge to thaw right now. Follow the directions on the package of Reynold’s cooking bags. They are foolproof. Slip a cookie sheet under that flimsy disposable pan.

Thanks for all the information.

Regardless of what recipe/method you choose…

If you don’t already own one, go out today and buy a probe thermometer. It’s the most useful tool you will ever own for the proper cooking of meat.