What to do with a box of old foreign money?

An elderly relative who used to travel extensively just gave me a box of miscellaneous foreign currency (I’m in the US) that he had amassed. Mostly coins but some paper bills. I see two 100 franc bills, 45,000 Mexican pesos, 40 deutsche marks, 4 British pounds and a Bahamian dollar bill. Plus a large jar of Canadian coins and another jar with assorted foreign coins.

I have no interest in coin collecting, but could use some extra cash right now. What are my options here? Highly doubt my local bank would buy/exchange it for me.

Editd to add: I just used an online currency converter…do I really have over $2000 worth of Mexican pesos??? Holy cow!

Got an international airport nearby?

A lot of banks will buy foreign currency, especially for places that Americans travel to frequently. It’s worth a phone call.

Note that Mexico normalized it’s money in 1993, with 1000 old pesos being worth 1 new peso. Considering that you said “elderly relative”, and francs and deutsche marks were retired in 1999 so those bills are at least 20 years old, I’m going to hazard a guess your pesos are probably only worth $2, not $2000.

Note that some of that currency is likely literally worthless, not just close to it. If those are French Francs, the deadline to exchange them for Euros has passed, so they’re just pretty historical paper at this point, not money.

It looks like maybe you can still exchange old Mexican Pesos, but only at certain designated locations in Mexico. Probably not worth it for $2.

Unless you’re really hard up or there’s an actual large denomination bill in there somewhere, it seems unlikely that you’re going to be able to get much out of this. The effort of sorting it out and finding a place that will exchange it might not be worth what you’ll get.

I also collect foreign currency when I travel, but I generally make a point of saving a pretty small denomination. I bet almost everyone does. It works just as good as a souvenir, and what’s the point of tying up lots of money in paper currency I can’t spend.

You could try sending it to a service like this one: https://www.leftovercurrency.com/

Based in London but according to their FAQ they’ll accept and exchange currency from almost anywhere, and they don’t charge a fee or commission. You do have to get your cash there yourself, of course, either in person or shipped, so make sure you have what you think you do, and that it will be worth the trouble.

If any of the coins are silver they do have a nice value.

You could give the worthless bills to a child to play with. I’m actually planning to give a 12 year old relative an envelope full of old foreign currency for Christmas this year.

An elderly relative who used to travel extensively just gave me a box of miscellaneous foreign currency (I’m in the US) that he had amassed. Mostly coins but some paper bills. I see two 100 franc bills, 45,000 Mexican pesos, 40 deutsche marks, 4 British pounds and a Bahamian dollar bill. Plus a large jar of Canadian coins and another jar with assorted foreign coins.

I’d add you can mail DM’s directly to the German central bank if not really old (pre 1950’s) and get Euro at the final rate of Eur 1=DM 1.95583 But then you’d need to exchange the Euro’s for USD if you’re not planning to spend Euro’s soon. DM40~$23 not including the trouble and few bucks you’d lose going Eur>USD.
https://www.bundesbank.de/en/tasks/cash-management/exchanging-dm-for-euro-616928

Thanks. Just checked, they’re 1988 bills. Darn, got pretty excited there for a bit.

Based in London but according to their FAQ they’ll accept and exchange currency from almost anywhere, and they don’t charge a fee or commission.

If you believe that, I bet there’s a bridge in town they’d sell you too.

They of course do charge fees. They’re built into their exchange prices, which are not very good.

That’s worse than you’d get at most airport currency exchanges, which are also generally a bad deal.

Yeah, but the money was “free” to begin with.

OP, do you know of any coin collecting clubs in your area? Even if the money is worthless as legal tender, and not all that valuable on the collector’s market, they may want it for things like getting children interested in the hobby. I have a good friend who’s really into this, and he’s told me about coin clubs doing things like this - for instance, putting it in containers and offering it as door prizes.

Just did a quick check of ebay & the Coillectables section of Amazon.
Yeah, you can sell them.

If you have the time, sell on Amazon.
You can list them until a buyer shows up, no charge.

UNICEF has a program on some international American Airlines flights to collect spare change for donation. The website also lists an address to which you can mail the change (although I don’t know if the cost would exceed the value of the money.

Random foreign coins are sold by the pound. (Banknotes not as often, but it happens.) The Canadian money, at least, will still be legal currency at face value, but unless you can literally dive to a nearby place to exchange it, probably not worth your trouble–once a total stranger on the Usenet coin collecting newsgroup not only gave me his sleeve of (40 or 50, I can’t remember which) 12-sided Canadian nickels for the asking, but paid the shipping costs as well–he paid out of pocket to be rid of them.

1968 and earlier CAD silver coins can be sold to a coin dealer for the melt value. 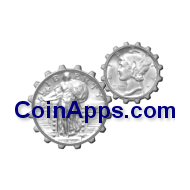 Calculate the silver melt value of your Canadian pre-1969 silver coins in Canadian Dollars, U.S. Dollars, Euros, Pounds or any of ten other world currencies.

My gf was doing some house cleaning and found a few Iraqi Dinar, complete with Saddam Hussein’s visage. The bills added up to several hundred dinars, which is currently worth about a quarter.

As others have said, the francs and deutsche marks are no longer legal tender, and the pounds probably aren’t either - the notes have been discontinued and the coins updated in the last couple of years (and £4 is only about $5 in any case)…