What toys and games did you want when you were a child?

A story of some things I got and one thing I didn’t:

When I was a kid, I was big into the TV show Knight Rider, with David Hasselhoff. What I wanted more than anything was the talking KITT car set with the Michael Knight action figure. 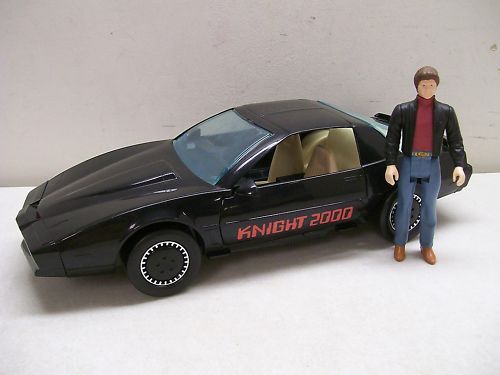 I guess I didn’t do a good job at first of telling my parents what I wanted, because they got me a Knight Rider electric racing set instead. 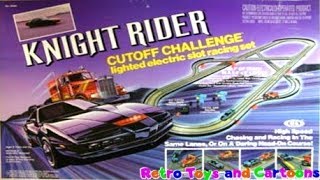 And the car wasn’t inside, so they had to return it to the store on Boxing Day. Eventually, I did get the KITT I wanted. I lost the car eventually, but had Michael Knight until I was well into adulthood. Kept him with my Star Trek action figures.

Speaking of Star Trek action figures, I collected the Star Trek: The Next Generation action figures when they first came out. First from Galoob, then from Playmates. I remember that Tasha Yar and Data were very hard to get, and my parents wanted us to keep them in the boxes, figuring they’d be worth some serious money one day. My sister and I, though, believed that toys are to play with, and so we ignored their advice. Good for us. The Tasha Galoob action figure is going for less than $10 on eBay even now.

I also had the Galoob die-cast Enterprise-D starship, which featured the brand-new starship separation.

A couple years before that, I just had to have Teddy Ruxpin, the talking toy that played the storybook cassettes. Could never find his pal Grubby, though.

Let’s see, what else.

When Sonic the Hedgehog 2 came out for Sega Genesis, I had to have it. I played a demo version of the first one at Toys 'R Us, and was hooked. Sure enough, one Christmas, there was a giant box under the tree. But I opened Sonic 2 (and Ms. Pac-Man, and Carmen Sandiego) before the Genesis. So I was thinking, “Either my parents are really stupid, or that big box is the Genesis.” Of course, it was.

One thing I asked for that I never got was the Deluxe Wheel of Fortune set, that came with wedges you could add to the wheel.

What did y’all want when you were a kid?

One thing I asked for that I never got was the Deluxe Wheel of Fortune set, that came with wedges you could add to the wheel.

My sister and I wanted Mouse Trap but nobody ever bought it for us. I encountered the game many years later when volunteering at a summer camp; turns out never getting it was a good thing.

When I was about ten, I wanted to get scuba equipment. I did get swim fins and a mask. It wasn’t exactly the same.

I wanted a model train set, but never got one.

I wanted the Mattel X-Wing Fighter, and got one for Christmas. I thought it was the best thing ever. My brother got the Tie Fighter (the wings would fly off with a button press, as if it got hit by a laser bolt). We’d chase each other around the house playing space war or whatever.

However, the toy I miss the most is “I Took a Lickin’ from a Chicken” It was an electronic Tic-Tac-Toe game with a small animatronic chicken that would peck out it’s selection. I learned a fool-proof way to win if you opponent selects a middle perimeter square as their first move.

The one toy I always wanted but never owned was the Coleco Galaxian tabletop game.

When I was a toddler, I really wanted a Jessie doll from Toy Story 2. I got that one.

In early grade school the Pokémon games (Red, Blue, Silver, and Gold) and trading cards were all the rage. My mother absolutely would not buy me a game, trading card pack, or even let me watch the show, because she didn’t want me running around the house shouting “Max Max Max Max Max”. I wouldn’t be allowed to play Pokémon until late middle school.

When I was about that age, I wanted downhill skis. Yeah, like I could use them in most places in Iowa! I got sleds or snow saucers instead.

I also wanted a Ouija board, because it was in the Sears or Wards catalog and I thought it would be fun to ask about the future. Never got one, and now I’m glad because I’ve heard scary stories about them.

ISTR around 1983ish there being a trend of “robots” in the toy catalogs that sounded fun because I couldn’t view them very critically at that age.

I wanted a rock tumbler at one point, although I don’t know where I thought I was going to find cool rocks to tumble.

I was at least pretty curious about the world of modems and BBSes, but knew that was unrealistic because everything was long-distance out in the country.

Pre-computer age here. At the toy store was a robot toy, much like a miniature “Robbie”, which could roll on powered wheels. Inside the head was a rotary mechanism that moved a wiper every 5-10 seconds. At each position of the wiper was a 3-position selection switch, L-R-N. You could program the switch as Left, Right, or Neutral. When the wiper landed on the switch, the robot would move left, right, or straight ahead. I think there were a dozen or so contact spots in a circle before it repeated.

I REALLY wanted that toy, but at $12, it was one of the highest priced ones in the store. That put it out of my family’s pocketbook range and no amount of begging worked.

I got a Johnny Lightning 500 track set one year for Christmas. It was awesome! I got the Cyclone track set the next year. I really thought it would be even more fun than the original. Disappointing, it was.

We always had Sears, Montgomery Ward, J.C. Penney, and Spiegel catalogs in the house. I remember longing for one of the giant track sets for slot cars therein, but never got one. The only slot car set I ever got to play with was one my brother got before I was born. It was some sort of D/X gas station promotion. The cars in the set were different from the ones my friends had. The transformer was an ac/ac one, and the motors in the cars worked similarly to the ones in cheap hair clippers. My friends’ cars all had regular little dc motors in them.

Oh, yes, slot car tracks. I worked at Target in the early 1980s, and there were more of those in the return bin, marked “defective”, in the days after Christmas than of almost everything else put together.

My sister and I wanted Mouse Trap but nobody ever bought it for us.

Yes! This is what I came to say. It looked so fun in the commercial.

When my brother and I were little kids in the seventies, watching Saturday morning cartoons, we used to rag each other during the toy commercials. “I bet you want that. Well, you can’t have it!”

The Dawn doll fashion stage. A friend got one for her birthday and we were all jealous. Never got one.

Legos. My mother put her foot down and told us no.

I wanted a Hoppity Hop ball, though I thought they had a different name. Vintage Hoppity Hop & Hoppity Horse toys were bouncing balls of fun - Click Americana. Never got one.

I always wanted the Meccano 10 set. I had some lower numbered set and its booklet had this section what were in the sets and the set 10 came in it’s own wooden box with lockers for various pieces. Eventually I gathered from various sources so much Legos that my fater buildt me two different two tiered wooden boxes for them. The Meccano was transfered onto our summer cottage and every summer while playing there with it I still wondered about the set 10.

I wanted a model train set, but never got one.

Your childhood was deprived. I will forgive you any Moderating Mistakes for that reason.

I had several GI Joes in the 60s. There was a rival military figure, “Stony” that had soft plastic hands, like the cowboy and Indian I cannot recall the name of. Stony had very cool weapons, made of softer, unbreakable plastic. M-3s and BARs.

I wanted a USS Flagg playset. That’s a GI Joe aircraft carrier. Fully assembled the damn thing is more than 7.5’ long. I wouldn’t have had anywhere to put it or play with it. As an adult I wish I could have slapped little me across the back of the head for wanting something so dumb.

I also wanted a toy Unicron. That was the giant robot that turns into a planet in the Transformers cartoons. I think I really wanted big toys. As an adult I ran across one and bought it, and I love that thing. It’s pretty big but not impractically so, and it really resembles the character from the cartoons. (It’s packed away in a box somewhere.) 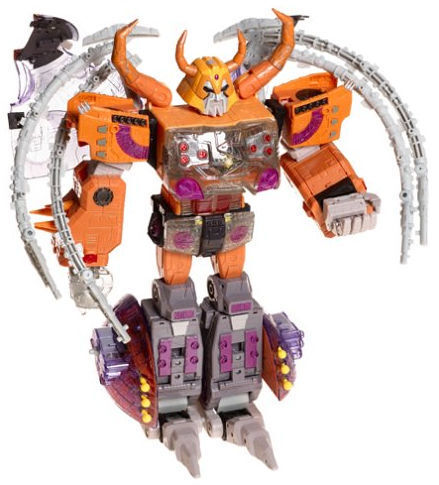 The last thing I wanted and never got was pretty small and simple. I wanted a Condor from the cartoon MASK. It was a toy motorcycle that turned into a helicopter. I never did get one or any other toy from that cartoon. Now, I could probably find one somewhere on eBay or whatever but I have no interest in it anymore. 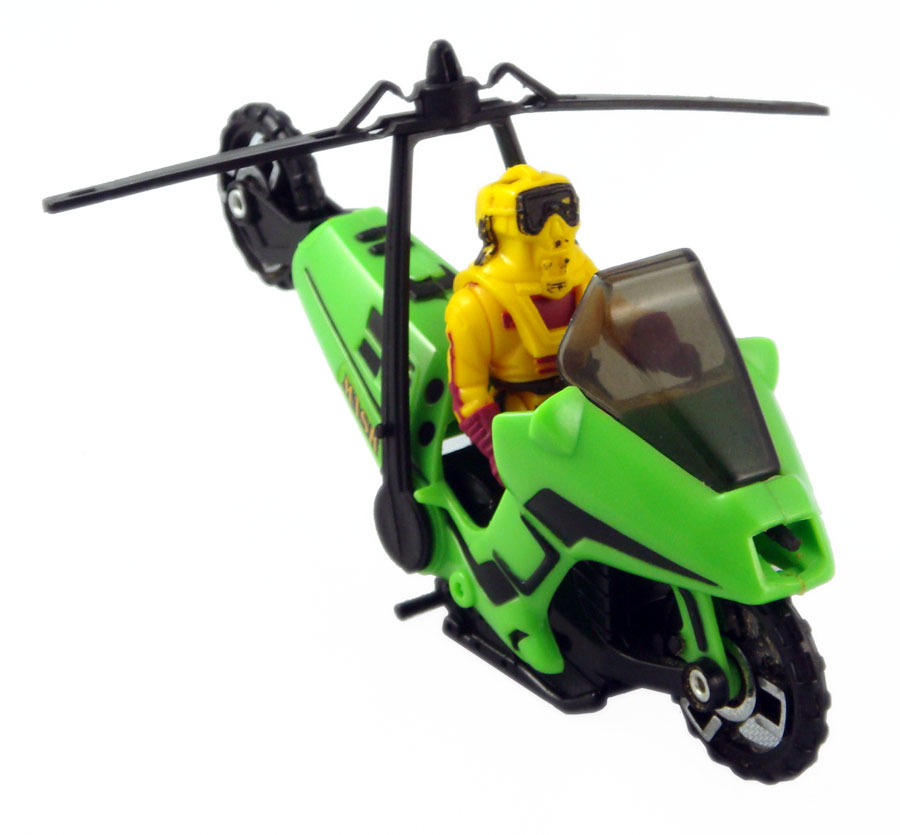 Frankly I now think it looks ugly and dumb.

I wanted a Condor from the cartoon MASK. It was a toy motorcycle that turned into a helicopter.

I remember that show. I got a T-BOB toy from it. 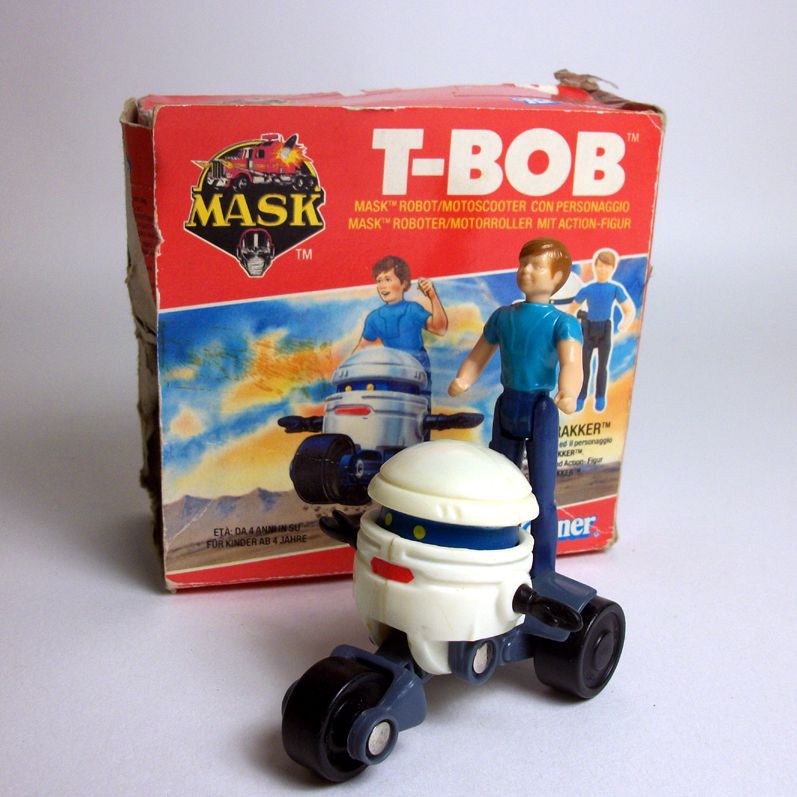