Are we supposed to guess what letters are missing there?

Yeah. But don’t pause for more than 4 seconds.

Oops. Too late. You lose!

Pat could have really rubbed it in and pulled a Troy Stevens (20:36) 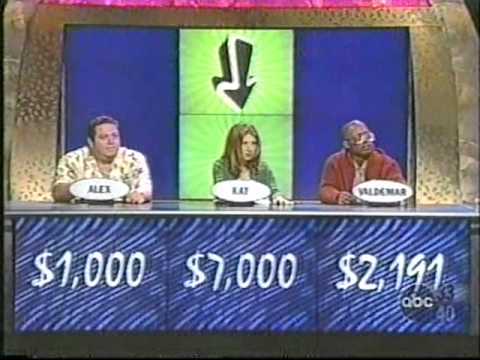 I agree. That’s why I watch Wheel of Fish instead.

And yet everyone seems to know that rule for Jeopardy. Wheel just pulled this shit out of their (apparently complex) rulebook for people to learn about it as it happens.

Hell, I got no problem with rules, or even complex rule books. I like American football, despite it’s insanely complex rules. When a rule is enforced on the football field, it’s meant to make the game fair for the two teams competing, even if the rule seems arbitrary or comes out of nowhere.

But the Wheel people enforcing this nonsense? Who is it making the game more fair for? Themselves? This game show exists for people to guess puzzles (she did) and win prizes (she didn’t.) It’s not even like the Wheel of Fortune people lose anything when they give away an Audi; they likely got it for free from Audi.

Do viewers at home actually enjoy watching a game decided because of an obscure rule that no one’s ever heard of before? Maybe in football or some other sport (where one team’s fans come away the “winners”). But on a game show? Come on.

And yet everyone seems to know that rule for Jeopardy. Wheel just pulled this shit out of their (apparently complex) rulebook for people to learn about it as it happens.

FWIW, I don’t care what rules WoF has, except as it relates to questions of fact relevant to the “controversy” at issue. I care more about how “controversies” get manufactured in the media to generate clicks.

Do viewers at home actually enjoy watching a game decided because of an obscure rule that no one’s ever heard of before?

Alternatively, do viewers at home enjoy watching a game where where anything goes? Ambiguity can be as detrimental to a viewing audience as anything. Some rules might exist just to ensure a minimum threshold of “viewability” for the audience. Between the extreme of someone making an answer in fragments that are difficult to understand (like spitting out one word a time, several seconds apart each, where it’s not clear if they’re spouting off the first word of a new phrase or just struggling to get out a single phrase as it comes to them not as a fully formed thought) versus someone hesitating longer than usual to get out the last “word” there is bound to be some need for line-drawing on the spot. Judgment calls by hosts and whatnot.

It seems like a pretty generic rule because you get to make multiple guesses. You make a long break, and the question becomes “Are you finishing the last phrase or starting a new one?”

Right. It’s a judgment call. In this particular instance, it seems like the host perhaps judged a little too conservatively, but then again maybe it’s a brighter line rule than the media has suggested. Either way, there is perhaps a margin of appreciation between what a host must allow, what a host can allow, and what a host cannot allow. Perhaps this was in the realm of what the host “can” allow and here he chose not to. Again, I don’t really care about how bright the line is (unless of course there is a factual answer that could settle this particular matter), but as an example of how controversy can be generated by an underappreciation for nuance in reporting, stoking rather than subduing the (perfectly understandable) ignorance of casual viewers, this is a pretty good case in point, perhaps with a broader lesson to be learned.

It seems like a pretty generic rule because you get to make multiple guesses. You make a long break, and the question becomes “Are you finishing the last phrase or starting a new one?”

But there’s no such ambiguity here. She clearly was finishing the puzzle. She clearly did figure out what the puzzle said. But, because of some rule that they’ve never given any indication existed before, it didn’t count. In fact, the rule still hasn’t come out, suggesting it isn’t a hard and fast one, but rather a judgement call. And, if it was, then it definitely seems like a bad one, as, again, she clearly did work out the puzzle.

It’s not like the rules about having to pronounce things properly, or not add any extra words. Even though those rarely come up, those are well established rules. And there is always a specific thing they did wrong, e.g. you said this word wrong or added this word.

If there was some rule like “you can’t pause more than X seconds,” and we knew about it, I wouldn’t care too much. But right now it just seems to be some vague “took too long” that has no real definitive answer. It seems to be a judgemental call.

And, if it was, then I would argue that a judgement call should care most about whether or not the contestant had worked out (aka solved) the puzzle. There’s a reason why Wheel viewers thought it was an unfair ruling, which is what made it a story.

Oh, and @ASL_v2.0, the host almost certainly had nothing to do with the decision, I’m sure. They usually don’t. There are judges behind the scenes. And I’ve noticed Pat sometimes waiting on them.

I also don’t see any lesson to be learned here. It’s not up to the media to find the rule. It’s up to Wheel of Fortune to communicate what exactly the rule is and why it exists, but they haven’t. Then the media could report on that.

As is, the media is just saying what any other person would say. It seems unfair. So unfair that most people on social media agreed. So unfair that the company thought it would be good PR to give her the car anyways.

No one likes people being sticklers for rules they didn’t know about. And no contestant seems to have come up and said “yeah, we know about the 3 second rule” or whatever.