When did "Urban" become a euphamism for "Black?"

A few years ago, Starbucks opened a store in Harlem. They decorated it differently and proclaimed it their first “urban” store.

This, despite the fact that Starbucks have infested every major American city for years. They meant something else.

“Urban” has slowly become a euphamism for “black,” and I’m curious as to when and how that happened. It was recent, I know that.

I knew I was on to something when even The Simpsons made a joke about it.

Granted that this could quickly devolve into a whole ranting thread about culture, race, perceptions, and all sorts of fun stuff that makes people’s veins throb, I’d like to keep it simple and direct: When and how did “urban” become a euphemism? Or am I just seeing something that isn’t there? Do people think I’m off-base with this? Has anybody besides me (okay, and The Simpsons ) noticed this?

This is just one of those things that confuses me. I’m easily befuddled. You should see me try to figure out cable TV.

I wouldn’t call it a euphamism, I’d call it a code word for Black in the same way that Suburbs is a code word for White. I think this began in the sixties during the height of the civil rights movement and white flight to the suburbs.

The “why” of the substitution seems obvious. America is simultaneously race-obsessed and afraid to say anything about it. Euphemisms are a way to talk about something without actually talking about it. It’s the “when” and the “how” that fascinate me.

Was this a deliberate choice? Will it become common currency or do you think it’ll fade out? Will it garner subtle and defined shades of meaning that will make it a truly useful term, or will it remain vague?

I don’t recall that usage in the 60s. My first encounters with it happened in the early 1980s and were, initially, specific references to black-oriented radio formats–no single variety of music, but all-black DJs, dance promotions that catered to events more likely to have black patrons, and advertising geared toward black hair care products, etc… I suspect that it spread from there (unless it hd an earlier origin that got past me).

I think Tom is right- in the early 80s, back when I was living in New York, radio stations that played soul/R & B all started using the term “urban contemporary” to describe the music they played.

After that, the word became an all-purpose synonym for “black.”

America is simultaneously race-obsessed and afraid to say anything about it.

Oddly enough, I find that my perception of Urban has evolved AWAY from a code-word for black to be more comprehensive (and legitimate). Specifically I find that much “urban” stuff, whether clothes, music, etc. encompasses black influence, latino influence, asian influence, etc. from the -actual- urban environment.

I prefer to think that a real “urban” cultural segment has developed that’s a melange of these inner-city, multi-cultural experiences and expressions and actually needs a way to express that in a word rather than a sentence.

DrLizardo - absolutely agreed. IMO, ‘urban’ isn’t so much used to mean black, but minority. And I think that that’s what urban has basically become. My history teacher summed it up quite nicely: “During the civil rights movement, whites finally agreed, and allowed blacks to live in their neighborhoods, shop in their stores, live in their lives. And then the white guys ran like hell and built their own towns and gave themselves front lawns.”

Urban has become synonymous with minority, and not just in connotation. Look around your average city neighborhood. Yes, there probably will be some white guys still there. But the majority of people will be black, latino, and asian. A city is urban. Now look around your average suburb. While there probably will be a few minority faces sprinkled in there, the vast majority of the population will be white. My opinions on this are VERY long winded, and I’ll spare you all, unless this thread goes in that direction.

Quinn: Why am I a Martian?
Director: The writers were having trouble writing for urban characters.
Quinn: “Urban”… meaning black.
Director: Anyway, you’re not a Martian. You’re from a race of symbiotes. A little snake lives in your belly.
Quinn: And what’s this, a spear?
Director: Space spear. Shoots lasers. Peeeow!

What the hell you are talking about?

I guess if you never saw the show, it wouldn’t make sense at all. Heh.

…about the same time “New York” became a euphemism for “Jewish.”

He he he. True… Jerry Stiller is Sooooo Italian.

Urban meaning black was invented in the mid-Seventies by NYC WBLS-FM DJ Frankie Crocker and was glommed onto by the prevailing market influences in radio-format development. The powers that be determined that “black music” would never sell as much as product and airtime marked “urban.”
http://en.wikipedia.org/wiki/Urban_contemporary 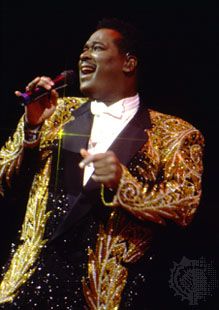 Urban contemporary music, musical genre of the 1980s and ’90s defined by recordings by rhythm-and-blues or soul artists with broad crossover appeal. Urban contemporary began as an American radio format designed to appeal to advertisers who felt that...

However, let us lay a historical context by marking the 1950s as a time when The Great Migration (the movement of six million African Americans out of the rural south bound primarily for inner city locations to the north) was already well underway. Their concentration in disadvantaged neighborhoods became shadow political justification for the race-scarred “urban renewal” policies (introduced during the Truman Administration), under which the federal government funded local “slum removal.” Those divisive and failed efforts set in place the tinder box of conflict which would erupt during the wave of riots in the Sixties.
The reason “urban” could be successfully used to mean “black,” for insidious commercial purposes - a cynical yet clever redrafting, and blurring, of this sad history - is because “urban” became the place, and people, those shaping the culture from the suburbs and exurbs had long abandoned.
Long Live The Cities! When a city reemerges and renews itself, our metropolis finds new reasons to be.

Interesting. Until this thread urban had never meant anything to me other than having to do with cities. Come to think of it, it still doesn’t mean anything other than that.

Urban meaning black was invented in the mid-Seventies

Huh? The National Urban League was around for more than fifty years before the seventies. And it was a black civil rights organization from the get-go.

Surely “urban” simply refers to a culture which many black people (along with others) identify with.

Wow, nine years… this thread’s almost old enough to be tried as an adult.

Wow, nine years… this thread’s almost old enough to be tried as an adult.