Where do people keep their passports?

A few years ago I had a friend who travelled extensively in the Middle East. He had two official and legally obtained passports because some countries really don’t like visitors with an Israeli stamp on their passports.

I don’t think it’s a problem these days as they, along with many other countries have given up the stamp.

Do other countries do anything similar?

Here (Denmark) they punch two holes through the passport.

Getting passports prompted us to buy a fire-proof box. Very handy, and all sorts of things went in there, even some things that were in our safe deposit box (but now we have quicker access to).

I keep mine in a drawer in the extra bureau in my bedroom…
No, it’s neither fireproof nor burglar-proof. But it’s convenient for finding when i need to pack for travel.

Try a locked, fire-proof box. Opening one really doesn’t take any more time, and does afford more peace of mind.

Thought: Hey, I wonder if they make small ones you could even keep in your “Travelin’ Drawer”.

Try a locked, fire-proof box. Opening one really doesn’t take any more time, and does afford more peace of mind.

On a scale ranging from “absolutely safe” to “absolutely reckless,” everyone’s got their comfort zone, I guess. We went with a safe because it’s heavy (85 lbs) and because we could bolt it to a shelf, so nobody is going to walk away with it. It’s also got more storage volume than a portable lockbox, so we can store passports, house/car titles, mortgage docs, external backup hard drives, spare keys, and various other items.

FWIW, my wife recently needed to open her parents’ locked fire-proof box. The keys were long gone. Turns out there are about a dozen websites where you just need to enter the number stamped on the lock, and they’ll send you a key. So the lock is a pretty worthless feature.

A few years ago I had a friend who travelled extensively in the Middle East. He had two official and legally obtained passports because some countries really don’t like visitors with an Israeli stamp on their passports.

That doesn’t make sense. I went to Israel in the 90s and even then it was a longstanding policy to stamp a separate piece of paper if requested that you could keep with your passport and then toss (or keep in a sock drawer) after your trip. That’s what I did because I did a lot of travel to Malaysia at the time and some of the Border Guards would definitely have been dicks about it.

If you are the traveling type two passports are handy because you can stay on the road while one of your passports is off getting a complicated visa.

As for the OP, my passport is in the fireproof safe with all the other important papers.

In the US, expired passports are returned with holes punched in them.

FWIW, my wife recently needed to open her parents’ locked fire-proof box. The keys were long gone. Turns out there are about a dozen websites where you just need to enter the number stamped on the lock, and they’ll send you a key. So the lock is a pretty worthless feature.

I used to watch Storage Wars, a show in which people bought the contents of abandoned self-storage lockers. Every so often, there would be one of those fire-proof boxes in the locker, and the people were usually able to open it, often simply by dropping the box from a standing position. So I know that it’s not secure against a determined thief. (BTW, the one I have claims that it will also be watertight, which might help in the case of a fire being fought by the fire department.)

If you are the traveling type two passports are handy because you can stay on the road while one of your passports is off getting a complicated visa.

There are a few reasons for having two passports but having an extra one just for Israel isn’t one of them unless it’s an actual Israeli passport. A former co-worker of mine had an American and a Belgian passport and would use the one most convenient to where he was going depending on things like visa requirements. He would sometimes use different ones on different legs of his trip.

In the US, expired passports are returned with holes punched in them.

Oh, and they are all in the top drawer in the desk in the office.

How long does that work for? That is, it doesn’t help if the box is fireproof if the contents heat up enough to incinerate. I assume it’s also insulated, but insulation only slows the transfer of heat.

It seems silly to buy something complicated unless it’s likely to work.

They would be designed to withstand a typical house fire but not a blast furnace. I was curious too. The NY Times did a review and tested a bunch of models. 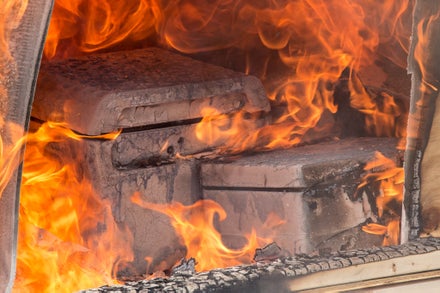 We’ve tested more than a dozen safes over the years, even burning five of them in a controlled fire, to find the best fireproof document safes.

Why does he have three?

You can have as many as you are willing to pay for. Having three has a practical purpose. One in the office safe, one at the Saudi embassy waiting for a visa, one in the mail to the Australian embassy for another visa.

Do they all expire on the same day? I would also be practical to have overlapping end dates.

I just keep mine in my old writing box along with my spare euros and travel insurance policy documents, in a handy travel wallet that came years ago from a package holiday company, in the days when tickets and bookings were done on paper. I also have a photocopy of the key information pages in a zipped up internal pocket in my wallet, just in case I get asked for ID when abroad.

As for old passports, I seem to have mislaid the one with the best souvenirs (the old East Germany, for one).

I keep mine in a lockbox. (My wife and daughter’s passports too.) Since the box is small and easy to pick up, the box itself is chained to furniture with a really solid bike lock chain thing. It’s not impossible to take or open but it would take quite a bit of effort, and the idea is that hopefully a thief wouldn’t consider it worth the time.

Similarly, I have a pistol in a safe that’s bolted down to furniture. Not impossible to take or open, but it would require a great deal of time and effort.

Also, neither the lockbox nor gun safe are in plain sight. I can get to both quickly and easily but only because I know where they are.

I keep mine with my wallet, cards, other ID. I don’t drive. My only government ID with photo, is my health card which has no address, rarely accepted at say, a bank. I take it to vote, open a bank acct, etc. I often carry it around in my pocket or my tiny purse, never give it a second thought.

Between us we have 8 or 9 old ones, stashed away in a bookcase. ( the old style visas were a trip, multi coloured stamps that take a whole page, like the old Kingdom of Nepal ones!) Here they punch holes through to invalidate old passports, still fun to have.

I’m not very comfortable with the idea that nowadays we still have to rely on one unique physical document that gets us into all kinds of trouble when lost. There should be some integration with digital identity systems to simplify this process and make losing your documents less of the massive hassle it is. Estonia if I recall correctly has a 100% digital government and citizen ecosystem where your physical document is supplementary. It’s time for all countries to do this.

When you tire of storing them, they shouldn’t be terribly hard to destroy, either by burning or shredding.

Easier said than done. I don’t know anyone who owns a shredder, and I have no idea where I could build a fire big enough to burn a passport (those things are hardy) - certainly not in my apartment building, or anywhere near it. I’ll probably have to rent a car, and drive out of the city… better to just put them in a drawer.

Really? I have a shredder. I know that you’re not in the US but you can get one here for $20 on Amazon or Staples. How do you dispose of old tax documents or whatever?