Where does your or my success come from?

It’d be great to hear that there’s a name for this concept. I’d like to learn more about what others have figured out.

The question: what’s the reason each of us is as successful as we are, whether very or not very?

According to the myth of meritocracy, success (usually implied as financial) comes from being capable and trying hard. Any of us can be successful at something we’re capable of if we try hard. People who become wealthy largely do so because they do a great deal of good, through talent and effort. That’s according to the myth, which I don’t believe has much truth to it. I think the myth comes from people who are very successful justifying it, and from people who want us to try harder (as effort is the only item in this list we have immediate control over). Of course those are often the same people.

I think in addition to ability and effort, we have demographic identity, and who we know and are related to. And broadly the world we were born into, such as midcentury suburban USA in my case. And also the bizarre random chances in life. Is this a good way to divide it up? What am I missing?

If I try to guess at my own success, I’d say:

Is there a name for this effort or concept?

What do you think your profile is?

I’d divide it more simply into “Factors in our control and factors out of our control.” I’d estimate it at roughly a 2/3 to 1/3 split.

But one-third is really out of our control. Sometimes an actor catches the attention of a director and makes it big in Hollywood when nobody else happened to get that chance meeting or encounter. Sometimes an athlete simply lives in the right place to go to the right team or college. Sometimes an injury strikes and destroys your Achilles tendon right in the budding phase of your career and whooops, there goes your career. Sometimes you are just about to succeed in your own business start-up but then Covid strikes and ruins it all. A tornado can destroy your farm. It’s just hard luck.

Maybe equal parts of innate ability combined with low expectations. With a soupçon of surrounding myself with capable people.

It depends on what you’re calling “success”. If your measure is “able to support and raise a family, and give your children at least as good a chance as you had, while still living a fulfilling life”, then almost anyone can accomplish that by working hard. Go much beyond that, though, and factors outside of your control play an increasingly large part.

…If your measure is “able to support and raise a family, and give your children at least as good a chance as you had, while still living a fulfilling life”, then almost anyone can accomplish that by working hard…

But this hasn’t been true for a while, has it? Unless people aren’t working hard.

"The idea that each generation would be more fortunate than the last no longer applies and perhaps helps explain why young people feel that traditional politics has little to offer them. The political economy of the analogue age was based on the idea that people would have secure, full-time employment that would enable them to save the deposit on a home relatively quickly.

Two new reports show how that model has completely broken down."

[Each generation should be better off than their parents? Think again | Larry Elliott Economics editor | The Guardian]

My success? 80% sheer dumb luck (I was lucky with the right family, the right country, the right century - actually, the right tenth of a century -, the right genes - so far, right enough, anyway -, the right wife…), 10% friends and friendly colleagues and 10% laziness, which has allowed me to avoid the worst mistakes I thought of commiting, but did not bother to in the end.

Veritasium has an interesting video on the subject. 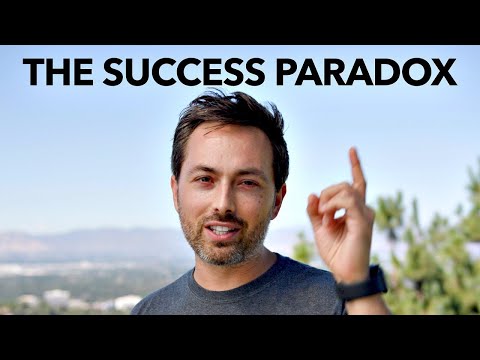 ISWYDT.
(Yes, Discourse, this is a complete sentence.)

This also depends on what your view on free will is.

But even disregarding that, my success has been mostly luck. Born at the right time and place, and being smart enough to do my job. Also, a couple of lucky things happening along the way.

I’d divide it more simply into “Factors in our control and factors out of our control.” I’d estimate it at roughly a 2/3 to 1/3 split.

But one-third is really out of our control.

Does this imply that your IQ (by which I mean some measure of intelligence, not an IQ test result) is in your control? Is who your parents are in your control? Are your natural talents in your control?
I could practice piano five hours a day but I’m tone deaf and I’d still suck at it. When I auditioned for Jeopardy there were locals there who took the test as soon as they were able to, and studied, and never passed it. I breezed in and aced it with no effort at all. Just the way I’m built not under my control.
If decisions you make are considered under your control (dubious) I’d say no more than 15% in my control, 85% out of it.

If you follow this logic all the way, you can end up with 100% outside your control and 0% within your control.

I think hard work does differentiate people at the highest levels. The question, however, then becomes whether or not the willingness to work hard should also be considered a talent. Take the NFL for example. Tom Brady is considered by most the greatest quarterback to ever play the game. IMHO, he’s not the greatest because he can throw the ball faster or further than any other QB. It’s not because he runs faster or has greater agility. It’s not even that he has greater hand eye coordination allowing him to throw passes with greater accuracy than any other QB. It’s because he works harder, including things like sticking to a healthy diet and strict workout regimen year round. The flip side is that if it were that easy to work hard, many others with greater physical talents would have done so over the years, and would be better than Brady is. The fact that no one has shows that working hard and maintaining a very high level of self-discipline are in some sense talents that go along with abilities like being able to run fast, throwing a ball far, or even non-athletic talents like having a good ear for music.

If you follow this logic all the way, you can end up with 100% outside your control and 0% within your control.

That is what I answered, I thought.

I think something that hasn’t been mentioned yet here is degree of motivation. Capability is necessary, of course, and so is hard work. But unless you have that belly fire to be the best at whatever your chosen field is, you are never going to be more than mediocre.

I’d say most of mine is from just a willingness to show up/try. I’m often amazed how frightened people are of failure, to the point they won’t even attempt something.

But unless you have that belly fire to be the best at whatever your chosen field is, you are never going to be more than mediocre.

I’m less interested in those very few people getting to be best in their field, and more interested in the great many of us who are mediocre and fairly successful. I’m mediocre. I have a nice house and financial security and a very pleasant life. I’m way more successful than numerous other people I know who have their own strengths and are trying hard. I’m thinking my success mostly came from these other factors and not from my efforts and abilities. My efforts and abilities are pretty good, but then a huge number of other people have pretty good ones too, and yet don’t have nearly as pleasant a life.

You’re my brother from another mother.

Whereas I would say Tom Brady is the greatest in large part because of luck. I would say his success is 90% luck or more. He only got a shot to play because of an injury to another player, he just happened to start playing for one of the best coaches of all time, who also happens to be very good at building a capable team around him, and he has never had a major injury. If Drew Bledsoe never got injured, or if Tom Brady languished on a team like the Browns, or if he suffered a major injury like so many NFL players the story about him would be very different. Sure, his hard work is a part of it, but even then I’m not convinced he works harder than other upper-echelon quarterbacks. I think that’s largely just a justification people give him because it’s depressing and ego-destroying to admit that success is largely luck-based.