Which is the most common superhero ending trope, the blue beam of light or "charging across a field at each other"?

I remember the blue beam of light was done enough in both MCU and DCEU movies to the point the writers of those films made jokes about them in interviews. I don’t know if it was the first one to do it but Avengers 1 famously had the evil blue beam of light going from ground into the sky in the climax.

Soon after superhero movies stopped doing the blue beam of light but wound up doing another bizarre cliche, the ending where two groups meet on a large open field of battle and then charge at each other leading to immediate one on one warfare. Captain America: Civil War is the first one I think of with this ending but other MCU movies from that era also wound up doing this as well. Note I’m not talking a generic one on one fight at the end like Wonder Woman, but it has to be a half-dozen or more people on each side charging at each other.

So which cliche wound up happening the most?

So which cliche wound up happening the most?

I think the “Blue Beam From/To The Sky” is the most common; the earliest rendition of it that I can remember is actually from Independence Day where it at least kind of makes sense as some kind of Destruct-O-Ray: 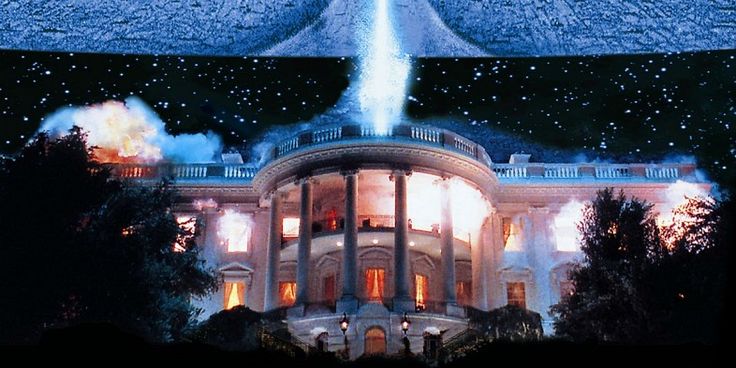 In the Marvel and DC films, it mostly just seems to be a shorthand for signposting that the big fight is almost over. The Avengers (first one) actually started with the blue beam, which I guess is supposed to be the Space Stone opening a wormhole or…something, :

and then it later does the same thing to open up a portal for the Chutari invasion fleet. Marvel has mostly gone away from it since it has become a tired trope but it has certainly seen plenty of service.

Captain America: Civil War, Avengers: Infinity War, and Avengers: Endgame all had two lines of troops meeting each other on the battlefield, Braveheart-style, which I would agree makes little sense, as a bunch of the characters have powers that don’t require them to be in melee range. It’s a pure Rule Of Cool trope that is clearly intended to reflect the comic book origins (in Avengers: Age of Ultron they actually had the characters stack up in a flying/kicking line, which was ironically dumb because Thor had just made the comment about how the Hydra goons were stupidly coming at them in a straight column).

A more common trope is the “nine count”. As the baddy stands over the vanquished superhero and gloats, the hero has some sort of inspiring epiphany that gives them the strength to get up and clean the supervillain’s clock.

Or an ending you see a lot in action movies in general: the bad guy has done some really bad stuff, maybe killed someone close to the good guy, so the final battle is really personal. The good guy defeats the bad guy, and seems like he wants to deliver a death blow, but he says “no, I won’t kill you. I’m better than you”. As the good guy walks away the bad guy grabs a nearby weapon, or pulls one out of a hiding place, and is about to shoot the bad guy in the back, leaving the good guy no choice but to turn around and kill the bad guy after all. Thus the good guy stays virtuous while avoiding an anticlimactic ending.

Or, just before the good guy kills him, Evil Dude somehow falls from a great height (and might even be impaled in the process).

An alternative is my Most Hated Trope (jut because I’ve seen it SO many times, and it’s so lazy):

Evil Dude has the Good Guy defenseless in his sights, and a shot rings out! GG checks his chest… no holes. Evil Dude falls over, revealing sidekick/love interest with a smoking gun.

Or, just before the good guy kills him, Evil Dude somehow falls from a great height (and might even be impaled in the process).

I remember reading an interview with Danny Elfman’s agent, who said that Elfman got so tired of composing music for “bad guy falling from extreme height” endings that he told his agent “enough.”

So, when producers would call the agent to ask for Elfman’s services, the agent would say, “How does your movie end?” If the producer replied with something like, “Oh, we have this very exciting fight at the top of a tall tower, and the villain falls down,” the gig was immediately rejected with no further discussion.