Who is the first one to do the laser beam collision thing in cartoons?

You mean like this? Pewwwwwwwww vs pewwwwwwwwwwwwwww and then boom. I always thought it was a Dragon Ball Z thing, but TVTropes calls it BeamOWar and lists two dozen other animes that use it.

It was in comic books a long time before it was in cartoons. Consider Justice Leaguie of America #13 from 1962, "The Riddle of the Robot Justice League. You can see right on the cover where Green Lantern is squi8aring off against his robot opponent, and their beams meet squarely between them: 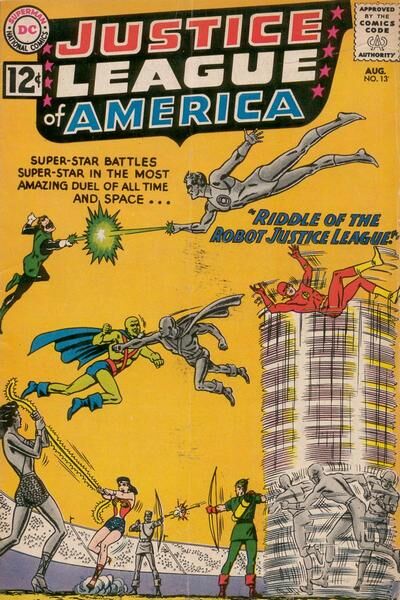 "The Riddle of the Robot Justice League!": While out on various solo adventures, the members of the Justice League are all transported to a distant planet by Sforll who has collected them to stop Zedd Brann. Brann is an alien from the planet Skarn...

The scenes are inside the comic, too. I don’t know if this is the first example (ray guns have been zapping people in comics since the 1930s. There’s one Superman story from the 1940s that shows a comic stripo-within-the0-story where two opponents fire ray guns at each other simultaneously, but you don’t get the “beam collision” in that case). , but you got a lot of examples with Green Lantern and opponents firing beams at each other in the 60s. Probably Adam Strange, too.

By the way, it’s not the same thing, but in the very first Superman cartoon from circa 1940 (untitled, but often called “The Mad Scientist”), Superman squares off against the “electrothanasia ray”, and fights it by punching it, and gets tumbled in return. (Talk about Laser Light Pressure!). The first case I’m asware of of someone “fighting” against a beam

I vaguely remember a really old sci-fi movie where there’s a beam battle, except it’s with electricity or glowy energy or something.

And this Popeye entry from 1960:
https://www.youtube.com/watch?v=EUHcGKpRXxw#t=242