If you completely abolished the private ownership of firearms, you would probably see some reduction in- not elimination of- shootings. Nuts and criminals who wanted guns badly enough would still get them. And this at the price of disarming the weak: women, the elderly, the outnumbered, who would go back to being helpless against people stronger than them or being ganged up on.

What percentage of people with guns are women, the elderly, etc.? I’ve seen people bring up this point, but most of the people I know (and yes, I know anecdotes are just that) who have and/or carry guns are young to middle-aged men.

Are there statistics for who owns guns? For who has concealed carry permits?

Please no pro or con gun arguments. I’m curious about numbers only.

A decreasing number of American gun owners own two-thirds of the nation’s guns and as many as one-third of the guns on the planet – even though they account for less than 1% of the world’s population, according to a CNN analysis of gun ownership data.

A study published in the Injury Prevention Journal, based on a 2004 National Firearms Survey, found that 20% of the gun owners with the most firearms possessed about 65% of the nation’s guns.

One in 10 women own a gun, the General Social Survey found.

All I could find at the moment.

I’m not sure any state has studied or released any demographics of their CCW permit holders. I certainly cannot find any for Minnesota. 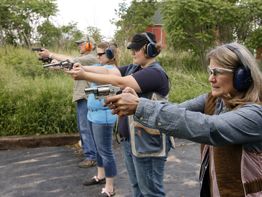 Self-Reported Gun Ownership in U.S. Is Highest Since 1993

Forty-seven percent of American adults currently report that they have a gun in their home or elsewhere on their property. This is up from 41% a year ago and is the highest Gallup has recorded since 1993.

How many guns does the Chinese military have? Is this only a survey of civilian ownership?

How many guns does the Chinese military have? Is this only a survey of civilian ownership?

It would needless-to-say be pretty skewed if it were, due to different laws and standards. But based on the seemingly outrageously high percentage (50% of the world’s guns? Seriously?), I would say it likely is. It also makes you wonder, if it is civilian ownership (or perhaps percentage of guns owned produced by civilian companies not under military contract, or even percentage of guns produced in the world that year), do militias in Africa or the Levant count for example, or are they considered militaries?

The problem with any study of this sort is that it only counts (and indeed, only realistically can count) known guns. How many guns are there in Africa, in the middle east, in south-east Asia that aren’t included in the study? AK47s, Saigas, SVDs, SKSs produced after WWII to modernize garrisons before the West invaded, K98s and Mosin-Nagants produced during the war for the Eastern front, all being churned out as quickly as they could, not counting clandestine arms shipments to other countries. How accurate are our estimates of their numbers? How many in that estimate have been captured and destroyed? The question of how many guns there are in the world and who owns most of them is almost doomed from the start for all those reasons.

Gun ownership, smithing, collecting, maintenance, and shooting will always be a gentleman’s hobby to me. I don’t worry how the rest of the world behaves with guns as long as I have mine.

Gun ownership is on the rise. I had trouble finding what I wanted in stock at an online dealer. They’d get some in (like S&W Revolver) and be out of stock in a day or two.

The range that taught my Concealed Carry Class recently went from teaching two Sat’s a month to every Sat.

For the OP, 2/3 of my class were women. Several mentioned restraining orders against guys they were afraid of.

When I was in Egypt, it seemed like everyone had a gun. It was a little weird. Maybe the difference is just that they carry them so publicly there, or it was just because I was in the touristy areas and there’s an overwhelming amount of security there.

Your first two quotes are answering the wrong question. Some people collect guns; some people only have one. Both have the same value for the OP’s question.