On occasion I have seen M-4s or M-16s with transparent ammo magazines - the idea being that one would be able to see how many rounds were in the magazine.

Sounds like a pretty good idea. I wonder why this is not typical of most weapons, so that you can know at any moment how many rounds you have before you need to reload?

(I know that experienced people can probably tell by judging the weight of the magazine, or by counting how many rounds they’ve fired, and that you don’t want an enemy to be able to see how many bullets you have left, but don’t the benefits outweigh the drawbacks?)

My title was - “Why aren’t transparent ammo magazines in more common use?”

Transparent plastics aren’t as strong as sheet metal. Even if it was just was cover over a slot in the magazine, it would still be liable to being broken and letting dirt into the magazxine which leads to jamming magazines.

Very few people get into gunfights where remaining rounds are a vital bit of information.

Very few people get into gunfights where remaining rounds are a vital bit of information.

And most of those who do can just spam the ‘R’ button during breaks in the action.

Handgun magazines tend to be totally concealed by the grip, so you’d have to take it out anyway to see how many bullets are left.

Most weapons do not have a protruding magazine. With that said, one doesn’t even need a fully transparent magazine (eg. G-36 mags), since just a small window will accomplish the same thing: https://www.impactguns.com/data/default/images/catalog/535/MGMPI556BLK_1.jpg

But it comes down to choice of material. Integrating a window into a polymer magazine is probably easier than steel or aluminum mags. Until we get transparent aluminum, those with cheaper (keyword: cheaper) metal magazine will have to go windowless. They are pretty much standard on polymer STANAG mags now, though. Admittedly, I can’t think of any companies other than PMAG making any, though. I’d assume anyone making something similar would make it with a window though. So it’s at the point where it is typical for polymer mags. But not everyone uses polymer. When buying in bulk, polymer mags are at least twice as expensive. So cost is the biggest factor there.

Glock has polymer mags for their pistols, and they do make a factory 33 round mag designed to protrude from the bottom of the pistol. But their magazine have a metal reinforcements that allow the magazines to maintain their size and shape and prevent swelling in order for the thing to drop freely from the pistol instead of getting stuck in the grip. They could probably redesign them with a slit in the metal to allow for a clear window on the side. But frankly, those mags are designed for a machine pistol firing about 1800 rounds per minute. The magazine is almost never half-full. It is either full, or you pulled the trigger for a second, and its empty… no need to count rounds.

NETA: Adding a hole in the side of a metal mag without covering it with a window would allow too much dirt into the magazine. So, they can’t go with just an open, windowless slit. It would have to be covered with clear plastic.

Just speaking from experience, I will say that even though I had PMAGs with windows most of the time, I never bothered or needed to check. If there is a lull in the action, I would just top off with a fresh, full mag, even if I had only fired 8-15 rounds. The actual number was not as important as knowing that I now have a fully-loaded magazine. It’s not good to wait until you are completely empty to reload. And you don’t want to have to end up reloading at an inconvenient time, as that can be fatal. Best practice is to reload often during lulls in the engagement.

Are there are smart guns yet that link up to a headphone or eye-mounted HUD to let you know how many rounds are left?

NETA: Adding a hole in the side of a metal mag without covering it with a window would allow too much dirt into the magazine. So, they can’t go with just an open, windowless slit. It would have to be covered with clear plastic.

My own pistol has a hole every other round in the mag so that you can tell at a glance how much ammo is left.

However, the entire thing is fully-inserted into the grip of the pistol when in use so you have to eject the magazine to see how much is left. That ensures that the holes are covered when the gun is fired.

I suppose the grip could have a clear plastic window so you could peek at the mag ammo level without ejecting it. Like most modern pistols the grip and the rest of the frame is already plastic. But it takes a split second to eject the mag in the first place so why bother? Either way if you’re in an actual firefight you’re unlikely to check it while it matters. In most cases you’ll know it’s empty because bullets stop coming out, that’s your cue to eject the mag and slap in a new one.

Bottom line seems to be that most interchangeable magazine firearms slot the magazine into the bottom of the weapon, where they’re not visible as part of the sight picture. You have to rotate the weapon from firing position to have any hope to see the magazine, and in a tactical situation that probably isn’t worth it.

One counterexample: FN P90, which has a transparent magazine casing, but that actually makes sense because the magazine is at the top of the weapon. You could probably literally glance down from the sights and see your ammo level.

Except he’s pretty preoccupied with not getting hit by bullets, and quite possibly some distance away too.

I wish there was a word for this conversational intro, a setup to the most delicately placed nanosnark possible.

This weapon famously had a window to see how many rounds were left.

The magazines in particular were the cause of about 75% of the stoppages or cessations of fire;

Except he’s pretty preoccupied with not getting hit by bullets, and quite possibly some distance away too.

That’s one of the reasons to use a scope.

The problem is that it just isn’t necessary. The ammo gets expended very, very quickly, and a partially expended mag gets replaced at the first opportunity. If you are in a situation where you have to take the time to look at your mags and figure out which one is the least empty, the shit has really hit the fan.

Isn’t the German SWAT soldier in the current Munich terror situation locking in a magazine with visible ammo here–about halfway down the story: 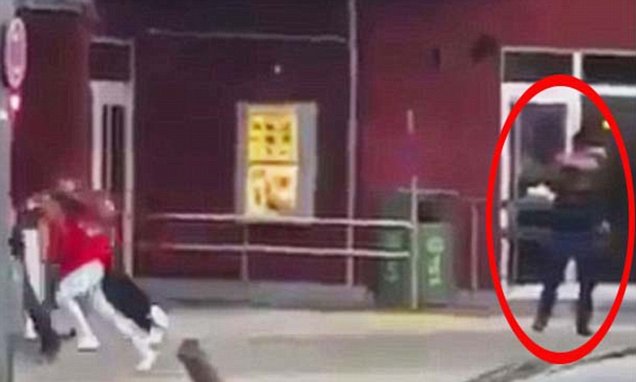 Did Munich killer lure children to their deaths on Facebook?

Munich was in lockdown for a major police operation around the city's Olympic Park, after the 18-year-old Iranian opened fire at the fast food restaurant, before targeting shoppers.