Why do we breath quick and long when in pain?

By saying “we”, I was generalizing our reaction based on individual self-observation, so if you experience otherwise, please enlighten me.
I hit my shin to the table’s edge just now. In the midst of pain, I noticed that my breathing was like this: fast & deep inhale, retention for a pretty long while, then fast & deep exhale, then retention for another long while, and repeat. Why this pattern?

Principally adrenaline, I think. Pain stress is strongly associated with circumstances where at a minimum we need alertness and focus, and sometimes to be physiologically primed for fight or flight. I’m not exactly sure why we tend to hold a long breath in initially (which I agree we do), but sucking in oxygen to get our metabolic rate up is certainly an adrenaline-mediated response.

That doesn’t explain why we don’t just breath in & out fast and continuously. The long retention times both with a full lung and an empty lung doesn’t help much metabolically, when compared with normal rate breathing… I think.

I thought I was doing this more or less on purpose, so as not to cry/swear/otherwise react in a socially unacceptable way. Kind of like holding your breath to stop the hiccups. Am I wrong? Is this actually an involuntary reaction?

Oh, so you do it too! But for me, I was alone at that time, and I don’t recall any urge/need for politeness. And I didn’t intend it at all, my mind happened to notice I was doing it involuntarily. My theory for now is that the very act of breathing (changing shape of lung) enhances the pain, thus we try to do that part as fast as possible.

I think we all do it. It’s common enough to have become a running gag on Family Guy. 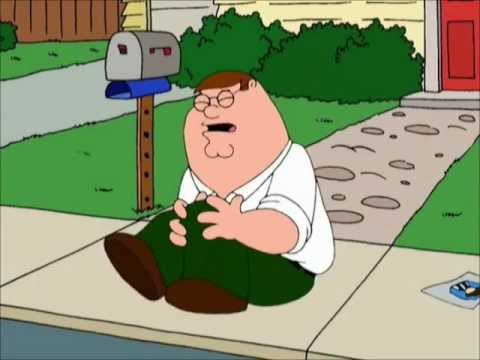 I don’t know about the holding of breath, my reaction to sudden pain is to take deep regular breaths while waiting for the initial sting to subside.

I am required to have First Aid/CPR certification, and almost every time I’ve gone for the re-certification training the instructor (generally a paramedic) has said that gasping, or taking a sharp inhalation, is the bodies autonomous reaction to sudden pain, and has explained this as a compensatory mechanism to prepare for possible blood loss by increasing the blood oxygen level. Paradoxically, this reaction can lead to worse damage if the cause of the pain is exposure to heat at head level because it could cause you to inhale hot gases that can then burn your trachea or lungs.

I had to get blood drawn yesterday and the tech told me to take a deep breath just as the needle went in. I’m pretty sure this isn’t the first time I’ve been given that advice, but I never really thought about it before.

In weightlifting and martial arts (and I suspect many other athletics) you breathe in during the “easy part” and breathe out during the “hard part”. So as you are doing the lifting or pushing, you breathe out and as you lower or release you breathe in. We practice like this in tai chi even though we’re not doing any combat or anything forceful, it helps with the meditational aspect. I suspect this technique is useful in other planned stressful situations such as having a large needle inserted into your arm. Breathe in first then breathe out when the stressful part happens.

Unless I misunderstood, he was telling me to breathe in during the stressful part.

Could be he was reminding you to breathe at all. Holding your breath does no good either way

Could be! I have an appointment to give blood this weekend; if I don’t get rejected for low hemoglobin, and if I remember, I’ll ask them about it and report back!

I went, I gave, but they didn’t tell me how to breathe. So I watched my body to see what it did involuntarily, and I just kind of winced.

Maybe it didn’t hurt too much. And the irony of self-awareness is that once we observe something, it doesn’t act as ‘naturally’. Like the running gag “You are now breathing manually”. Or perhaps, like physics’ particles behaving differently when observed. I think the best way is for another person to notice it while you know nothing about they looking at you. A lower-but-acceptable level, IMO, is like my case: I was doing it when suddenly I noticed it. Less chance for “it” to slip away.

I donno the answer, but breathing in and out rabidly can induce panic attacks or agitation in people (I had to learn to slow my breathing down when I would get anxiety attacks).

Maybe you have instinctively learned to retain the breath as a way of calming yourself?

I donno the answer, but breathing in and out rabidly can induce panic attacks or agitation in people (I had to learn to slow my breathing down when I would get anxiety attacks).

Maybe you have instinctively learned to retain the breath as a way of calming yourself?

So the reaction can be broken down to something like this? A deep inhale (exhale) is to saturate ourselves with oxygen in order to prepare us for a stressful event. But then rapidly doing that will itself lead to panic attacks, so some people negate that by increasing the gap between breaths. Doesn’t it also mean that some people who have not instinctively learned that will do fast breathing and will get anxiety attacks whenever they encounter lots of pain?

But… the pain of not knowing! It’s unbearable :))

Doesn’t it also mean that some people who have not instinctively learned that will do fast breathing and will get anxiety attacks whenever they encounter lots of pain?

Yeah, I think that’s possible. Apparently breathing too quickly gets too much oxygen in the system and causes an anxiety attack.

Slowing down the breathing or breathing into a bag lowers the oxygen and can interrupt the attack.

Slowing down the breathing or breathing into a bag lowers the oxygen and can interrupt the attack.

Not claiming to be an expert, but having just finished a first aid/CPR re-certification, I can say that breathing into a bag is not recommended for a panic attack. The current advice is to try to engage the person and calm them down. One technique is called box breathing (no props required) where you slowly trace the outline of a square in the air between you and the panicky person, breathing in and out on the vertical sections, and holding your breath on the horizontal sections.