Why no vacuum or hydrogen based airships?

I know that the Hindenburg clearly put a dent in people’s confidence in hydrogen’s usefulness in lighter than air travel, but that was a very long time ago, and there are still questions as to whether the hydrogen or the paint involved was responsible for that disaster. One would think that after th better part of a century, with new materials and technology that someone could engineer a way to use hydrogen safely in lighter than air travel. It weighs half of what helium does and is nowhere near as scarce. One would get twice the lifting power out of hydrogen. The titanic sank, but we kept building boats, airplanes crash and we keep building them. How come nobody is engineering safe hydrogen airships? What’s the holdup?

Secondly, it occurs to me that you really don’t even need a gas. Why not build a rigid airship that works with the same principles that control the buoyancy in a submarine? If one creates a strong and light rigid envelope one could simply pump out enough air to carry the weight one wanted to lift. It seems simple, but I am clearly no engineer. What’s the holdup with this route.

I would like to see the skies filled with giant airships and floating cities and islands, and I’m getting a little impatient.

Ever watch Archer? Airships are stupid.

Regarding the technical challenges: atmospheric pressure is pretty high. I know NASA has a large vacuum chamber for testing rockets and such, but it’s basically a bunker. I’m skeptical that you’d be able to make an airship sized vacuum with reasonable materials. Plus if you get a hole you’re in trouble quickly. And hydrogen didn’t magically become inert recently.

A large ship filled with vacuum (is that an oxymoron?) would require an extremely strong structure to withstand the external pressure. Any existing materials that could support that pressure would be far too heavy for the buoyancy to lift.

Vacuum: the bigger your vacuum enclosure gets, the thicker the walls need to be to resist buckling failures. This rail car couldn’t handle high vacuum. I don’t know how thick the walls are on such a thing - 1/4" steel? - but as you can see, it’s not strong enough to keep it from crumpling when the vacuum gets high enough, and you know it’s way too heavy to become airborne even if you did manage to achieve hard vacuum inside it. If you want an even bigger enclosure (think “Goodyear Blimp”), then you need thicker walls. You could opt for some kind of honeycomb structure to get good rigidity with minimal weight, but it’ll be insanely expensive, and assuredly still too heavy to fly.

At least not for now.

The problem is that We the People have a very bad attitude towards Hydrogen that any airship wouldn’t be commercially viable. I suppose a case could be made that these dangers are overblown, after all 62 of the 97 people on board survived. Just how many of these people who died because the thing crashed and how many people died because of the fire is hard to tell. For a couple hundred dollars, I’m flying across the USA in a 767 if you don’t mind.

I don’t think there’s any known material that can maintain a vacuum under air pressure and yet be light enough to create a “lighter-than-air” envelope AND be economical. I understand Helium is expensive, but with equal pressure inside and out we can get by with 1/4" of mylar or something.

You can buy a blimp, and you and your family could live in it … a blimp big enough to hold an entire city’s worth of people … I think we’ll have transporter beams like in Star Trek before that will happen …

ETA: Thanx for the numbers, MachineElf … gold star sticker on your forehead.

At least not for now.

One use that may switch to using hydrogen more often is weather balloons. They are often filled with hydrogen now, but sometimes helium is used. The issue is cost versus safety in handling the balloon, not the minimal extra lift. The lifting gas for a weather balloon is lost, and the use of helium for this application became an item of discussion when the helium shortage became a hot topic.

We should be using hydrogen instead of helium, because helium is the most non-renewable resource on the planet, and we don’t have all that much of it. Yes, using hydrogen does involve some risks, but then, so does everything, and the difference in risk between hydrogen and helium is negligible.

Unfortunately, thanks to the Hindenberg, the general public doesn’t see it that way, and so it would be almost impossible to get them to accept a hydrogen airship.

Another huge problem with airships is air resistance, and that’s going to be the same no matter what you fill it up with. Passenger airplanes today routinely cruise at well over 500 MPH, but an airship is as large as an actual ship and not all that much more aerodynamical, which tends to severely limit the maximum speed. The Airlander 10 is the most recent model in development and it has a target cruising speed of only 90 MPH, which would have been awesome in 1920 but nowadays makes it more suited for cargo transportation.

I would like to see the skies filled with giant airships and floating cities and islands, and I’m getting a little impatient.

Not 13 years ago you didn’t, in the middle of the night at 2AM when the model blimp you’d built attacked you. You created a thread, The horror of blimps. That is a hilarious first post! I enjoyed the read, thank you.

People who aren’t in a hurry would use them. People travel on cruise ships today, even though they take much longer than airplanes.

Air ships use far LESS fuel than airplanes. A 747 uses about 3500 gallons of jet fuel per hour. The Hindenburg used about 30 gallons per hour, less than 1/100 as much, and it probably could use less expensive fuel than a jet does. Of course the airship travels slower. The Hindenburg’s speed was about 85 mph, and a 747 travels at 570 mpg, but even accounting for this, the dirigible uses 1/17 the fuel per mile that a 747 uses.

And who cares about the fuel for the entire vehicle? You want the fuel per passenger, and a 747 carries about a dozen times more passengers.

Put it together, and the fuel per passenger per mile is actually about comparable between the two.

So assuming that the total cost scales with the amount of fuel needed, you’re paying about the same amount for a ticket on a slower vehicle. People still take cruises, you say… but they do that because cruise ships have all sorts of luxuries on board, like swimming pools and gourmet kitchens. And all those things weigh a lot, weight that you can’t afford on an airship.

A large ship filled with vacuum (is that an oxymoron?) would require an extremely strong structure to withstand the external pressure. Any existing materials that could support that pressure would be far too heavy for the buoyancy to lift.

This is correct. There are a few earlier threads on “vacuum balloons;” here is one of them. Bottom line is, to withstand external pressure, a sphere has to have a minimum thickness-to-radius ratio, depending on material stiffness (but not depending on sphere size). Having a certain thickness-to-radius ratio means that the weight of the vessel itself will always be the same percentage of the weight of the air displaced by the hollow sphere (depending on material density). Thus, to make this work, you need a material that has a high enough ratio of stiffness-to-density[sup]2[/sup] that no material comes close.

We should be using hydrogen instead of helium, because helium is the most non-renewable resource on the planet, and we don’t have all that much of it. Yes, using hydrogen does involve some risks, but then, so does everything, and the difference in risk between hydrogen and helium is negligible.

Unfortunately, thanks to the Hindenberg, the general public doesn’t see it that way, and so it would be almost impossible to get them to accept a hydrogen airship.

Another point about use of helium is that our applications do not involve “using up” the helium in any way, and it can last forever as long as it can be recovered, rather than simply being vented to the air. Better recovery techniques help a lot. More helium is used in cryogenic applications than in lifting applications anyway, and that’s where the focus needs to be.

The Hindenburg used about 30 gallons per hour …

I think that has to be per engine. It had 4 diesel engines, each producing 850 hp at normal cruise speed - so 3400 total horsepower.

What’s the greatest danger to a lighter than air vehicle? The weather. The Goodyear blimps have an operational ceiling of around 7,500’, while the Hindenberg’s maximum ceiling was 10,000’. The Airlander 10 (aka “Flying Bum”) – which I guess is the best current technology has to offer – has a maximum altitude of 18,000’.

No flying in thunderstorms, no flying in high winds, too low a ceiling to fly above the weather. And the higher you try to fly, the less efficient the technology.

In other words, airships are best suited for use as giant cranes that also happen to be able to fly a little in good weather. For any serious passenger flying, I’d rather have a DC-3.

I think that has to be per engine. It had 4 diesel engines, each producing 850 hp at normal cruise speed - so 3400 total horsepower.

This link gives 130kg/hr diesel fuel consumption at 820hp, which is a plausible ratio 130000g/hr/820hp=158g/hp-hr or ~.35lb/hp-hr, a highly efficient diesel for those times but plausible. And looking to the ‘engine’ link on that page it’s clearer that was the output per engine for four of them.

An overview of flight operations and flight procedures of the airship Hindenburg. [To learn about the “hardware” of flight — the flight instruments and controls...

Also consider the Hindenberg had a nominal crew of 39 (though 61 aboard in the disaster). In general just because one wants to be green doesn’t mean one can just ignore non-fuel costs. Let’s even assume we could come with an airship with lower kg/passenger/mile than an airliner (for newest big airliners it’s around 2.5). You still can’t just ignore the cost of crew labor and value of the passengers’ time, besides the procurement costs and safety issues (the operating profile of Hindenberg, as safest with that technology, was to fly at a few 100 feet off the sea surface, so besides not being workable on many land routes, it’s still exposed to low altitude storms which an airliner avoids: modern airliners are extremely safe, another technology that’s even very safe would have a long way to go to prove itself equal).

A plausible use of buoyant lift is a hybrid airship which needs some aerodynamic lift to take off, hence needs no big ground crew or automated replacement to haul it in and tie it down. But there’s even less reason to consider Hydrogen in that case. Like the Airlander 10, which happens to have been damaged during a test flight today. 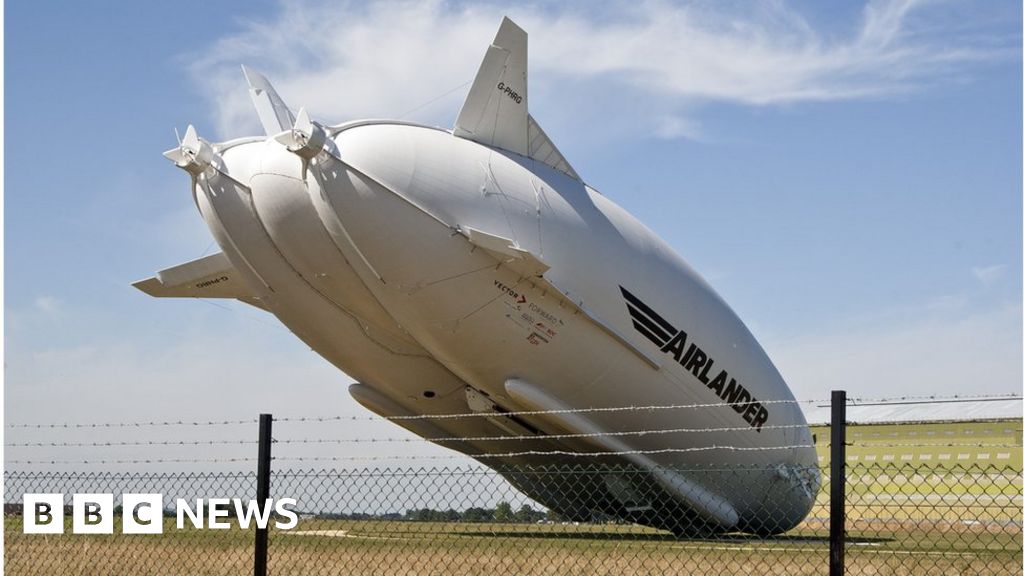 The world's longest aircraft - the Airlander 10 - is damaged when it takes a nosedive on landing during its second test flight.

Well, every other flight is successful …