So, it started yesterday, the trial of Winona Ryder.
WIll she be found guilty?
I am surprised that the prosecuters didn’t want to cut a deal, taking it to trial means they are pretty sure they will win, otherwise, they wouldn’t chance it.

Is the evidence enough?

I’m only going by what I read in the papers, but it seems pretty clear she’s guilty. The security videotape shows her hiding merchandise, and she told the security officer that a director told her to shoplift to prepare for a role. Her attorney’s argument seems to boil down to “she’s a celebrity, she was mistreated, she was only shopping, and she was going to pay for the stuff later.” Basically a throw everything at the wall and see what sticks.

She’s guilty, but the question is will she be found guilty. Who knows what a California jury is going to do. I too am surprised that there was no deal made in this case. I’m actually more interested in that issue than whether she’ll be found guilty or not.

It will be really interesting if she takes the stand. We shall see.

CNN had a story the other day that on the videotape the security officers lifted her top up, checking for merchandise (I guess), and discovered she wasn’t wearing a bra. Naturally (if that’s true, of course), the defense says it’ll claim abuse.

The thing that clinches it for me is she keeps claiming she had receipts for everything.

But…she has yet to produce the receipts.

I really do find it hard to feel sorry for her.

I haven’t been following any of this, really, but I wonder - if she had receipts and had actually purchased the stuff, wouldn’t someone from the store say, “Oh, yeah. She DID buy that stuff. I remember!”

In between classes today I was watching some Fox talk show sort of thing (kinda like the Today show crossed with Entertainment Tonight) and they happen to be doing a Winona update type thing and while she was walking into the courthouse what did the host of the show say to the reporter on the scene?

“Quick, move out of the way so I can see what she’s wearing!”

I don’t really have a point other than that kinda thing pisses me off. Is what she wears really all that important?

Personally I hope it turns out that this whole thing is a missunderstanding as I have a huge crush on Winona Ryder.

Note: If she is truly guilty I hope she is treated like any other criminal (thought I should probably make that clear).

Personally, I just hope it drags on for weeks and weeks cause that’s more days of her incredible cuteness on the TV and internet.

*Originally posted by dantheman *
**I haven’t been following any of this, really, but I wonder - if she had receipts and had actually purchased the stuff, wouldn’t someone from the store say, “Oh, yeah. She DID buy that stuff. I remember!” **

She had purchased several items, totalling around $3000.00. But she had also boosted several more expensive items. I keep hearing that she claimed she was researching a part when confronted by security.

I heard that too. That her director or acting coach or whatever suggested she try shoplifting in order to prepare for a role. (The Irish Times reported this yesterday; can’t link to it 'cos it’s a pay site.)

All the :rolleyes: in the world can’t convey my reaction to this… though if it is true, perhaps she should be locked up anyway for being too stoopid to be allowed to walk the streets.

The big thing today was that she appeared for court in a see-through dress. You can clearly see her black bra and white panties. Now, of all people, you think at least Winona could match. Alledgedly the Prosecutor kept oggling her breasts.

She has breasts?? Since when?

I’ve long been amazed by her ability to be 30+ years old and yet still look like she’s about 15.

I’m just wondering why she didn’t just plead guilty and pay a fine of some sorts? The only answer I can think of is, as the saying goes, there’s no such thing as bad publicity. She hasn’t been in anytihng decent lately and I guess she needs to remind people she’s still alive.

Don’t you people know anything??

The rich and famous don’t go to jail! Thats for the common trash like you and me! The rules don’t apply to them. You can drive drunk, shoplift, kill your spouse-- it doesn’t matter! If you’re one of the beautiful people, you skate!

What we have here is a failure to communique.

*Originally posted by dantheman *
She has breasts?? Since when?

She actually has had more than healthy-size breasts for being such a tiny person. (But I’m not ogling.)

Speaking of breasts, this whole trial upsets me. I had a crush on Winona since way back when, even though nearly every movie she’s been in is something I wouldn’t watch on a salary. At last her career had fizzled to the point where she was gonna have to get 'em out in a role for some attention. But now, with this trial, she’s got all this attention and notoriety that’ll keep her shirt on for years. Dammit, people, don’t you know when to let something take its natural course?

Winona, shoplifting? No way. We know our Winona better than that. We’re media savvy, and we know when we’re being hustled. And this Winona shoplifting thing is a hustle if we’ve ever seen one. Who’s behind it? The tri-lateral commission, the new world order, the men in black, saks? We don’t know. But we know that Winona is famous, and that means she’s right. And if she says she didn’t do it, she didn’t do it. So put on a free Winona Shirt and become a grass roots activist championing the cause of truth. Because while Winona isn’t free, no one’s free.

Winona brestage (work-safe, just gives some idea) for the naysayers: 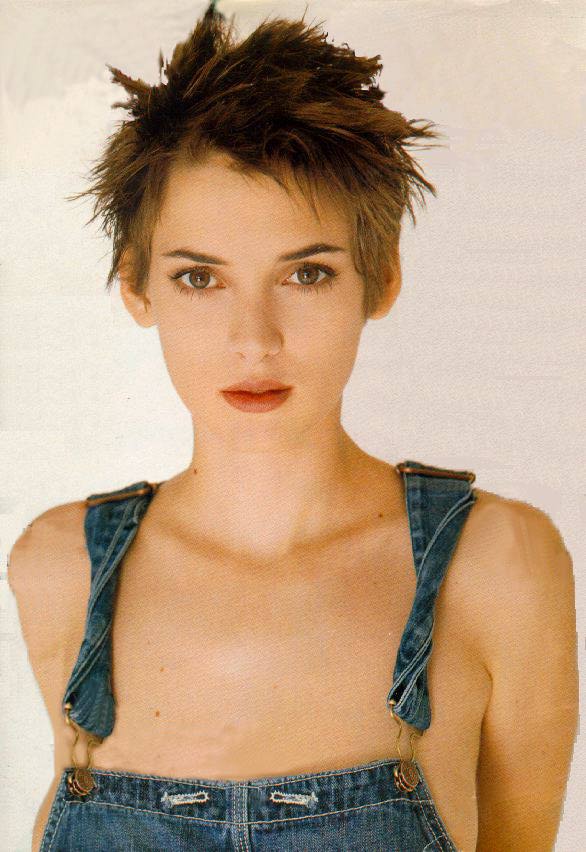