Would it be inaccurate or misleading to define a "miracle" as an "impossibilty"?

I’m imagining that those who believe in miracles would have an issue with this definition, and those who don’t would not, but I’m not sure if this true or why it would be true.

To those who don’t believe in miracles, it would render the statement “Miracles are impossible” a tautology, which therefore doesn’t say anything useful.

If there’s something that we’re sure can’t happen, we say “It’s an impossibility.” But we don’t say “It’s a miracle”; we say “If that happened, it would be a miracle.”

Plenty of tautologies to be had if you’re looking for them. English is full of synonyms.

I think that in common usage it often refers to improbable events: for example there is a 99% chance the patient will die from this illness and 1% that he won’t. If he is in the 1% it is often called a miracle.

Another example: suppose you are a student, forgets there is a test so haven’t prepared. And what do you know you pass the test. You might say it was a miracle.

well, yeah, if you’re saying that words are often used in ways that are admittedly inaccurate they lose their actual meaning.

If there’s something that we’re sure can’t happen, we say “It’s an impossibility.” But we don’t say “It’s a miracle”; we say “If that happened, it would be a miracle.”

Believers in miracles, however, as I understand them, are quite comfortable with the statement “God can do the impossible,” which is how miracles work. Something’s impossible? Dudn’t matter, God can transcend your limited understanding of what’s possible and impossible. If it weren’t impossible, it wouldn’t require God’s will to accomplish it, just more effort or more time, or a better understanding of the limits of possibility.

Strictly speaking, “impossible” would refer to something that can’t happen because it’s logically contradictory; e.g. it’s impossible to trisect an angle using only straightedge and compass. A miracle would be something that happens in apparent contradiction to the laws of physics as we know them- which would be “impossible” if you hold that the laws of physics are inviolable. Claims of miracles invoke the existence of a supernatural or preternatural agency- something that can override or supersede the ordinary functioning of physics. C.S. Lewis wrote a whole book addressing this.

There are different types of miracles. One type is simply a matter of timing–something happening at the very moment that it’s sorely needed. But another type is something that is genuinely impossible based on the routine scientific laws that rule the universe. 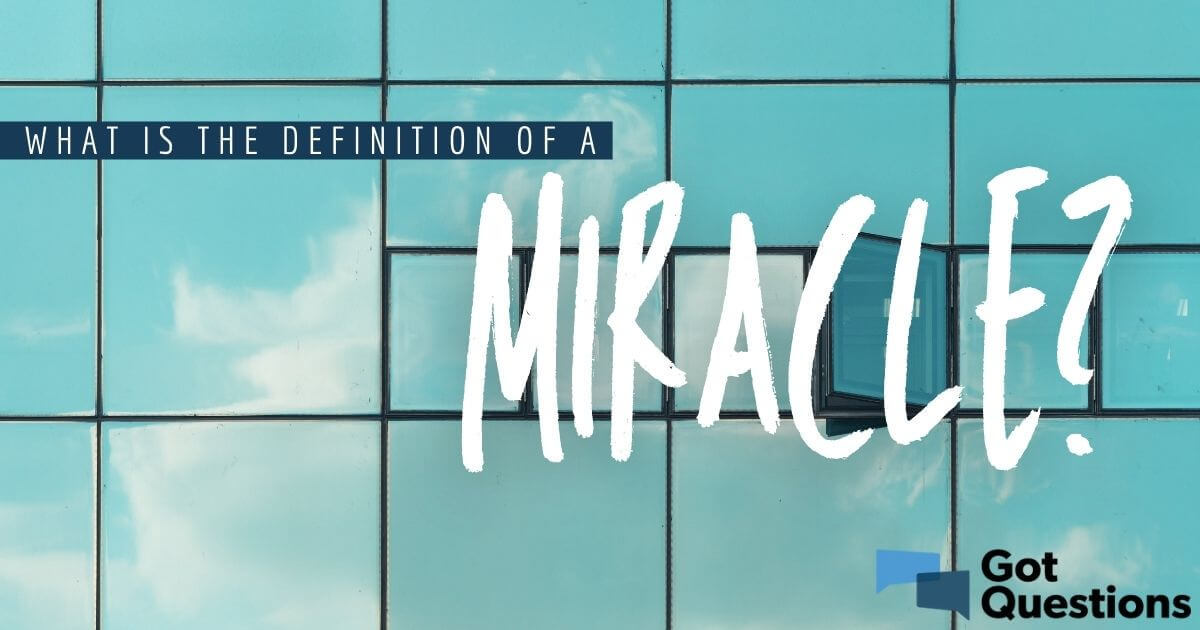 What is the definition of a miracle? | GotQuestions.org

What is the definition of a miracle? What qualifies something as a miracle? How can miracles be defined?

One of the miracles attributed to Jesus, and indeed one that’s considered among his most impressive, was telling a storm to be quiet because he was trying to take a nap, and the storm immediately calmed. Is that impossible? Of course not. Sometimes storms do, in fact, calm down very abruptly. And if it’s possible for it to happen, then it’s possible it happened right after Jesus told it to. But it’s still considered, by those who believe in the story, to be a miracle.

they lose their actual meaning.

No such thing as “actual meaning” exists in English. All common words have multiple meanings and denotations. The original use of a word has no power over later uses of that word. The fact that we can debate the usage of “miracle” tells us that no actual meaning exists.

Using “miracle” in a religious sense is a technical definition. Under that definition most people would agree that miracles are events considered impossible by the public and unexplainable in any other way than a supernatural happening.

In other contexts, “miracle” has the metaphoric extension of “extremely unlikely.” Or “an amazing achievement.” Or even “a seeming impossibility that nevertheless has currently unknown natural explanations.” Unless someone specifies the context in which the word is used, no meaning can be attached to it.

David Hume described a miracle as a “suspension of the laws of nature”.

That seems like a reasonable starting point. It would certainly suggest that the event is “impossible” given the current laws of nature as we understand them.

For me, someone’s cancer going into spontaneous remission? Not a miracle.
Walking on water? a miracle.

In other contexts, “miracle” has the metaphoric extension of “extremely unlikely.” Or “an amazing achievement.”

I take your point (and would extend it beyond English–every language has a lot of fluidity and interpretation) but I’m not talking about metaphoric extensions here. Obviously, metaphorical extensions are way beyond this discussion: I could find the eyeglasses I’ve misplaced and proclaim “A miracle! A Christmas miracle!” and it would be clear that I did not have the least religious sincerity behind those literal words, yet I was still thankful and amazed that the eyeglasses had turned up.

if you’re saying that words are often used in ways that are admittedly inaccurate they lose their actual meaning.

From your perspective that consensus usage is not the determinant of meaning, how would you analyze which of the multitude of meanings for the word “nice” through the ages is accurate and which is inaccurate?

nice | Etymology, origin and meaning of nice by etymonline

Or how about “silly”?

silly | Etymology, origin and meaning of silly by etymonline

David Hume described a miracle as a “suspension of the laws of nature”.

That’s pretty much what I was going to say. Defining “miracle” with an unqualified sing word like “impossible” brings up the tautologies so many have mentioned. But “impossible according to the laws of nature” is perfect.

See, I’m thinking that a certain kind of religious person would have no problem with defining a miracle as an impossibility (and nor would a non-religious person).

Non-Religious person: “Jesus walking on water is an impossibllity.”
Religious person: “Yes, for you and me. I call it a miracle.”
NRP: “It violates the known laws of the universe.”
RP: “Exactly, we don’t know everything.”
NRP: “Well, we sure as shit know that humans are much heavier than water.”
RP: “Precisely. Jesus wasn’t human.”
NRP: “But I heard you saying he WAS human, just a few minutes ago. Fully human, you said.”
RP: “That’s right. He was fully human. 100%. And also 100% God.”
NRP: “Nothing can be 200% anything. That also violates the natural laws, and logic, and common sense.”
RP: “Okay, but God breaks his own rules all the time. That’s kinda His job.”
NRP: “To do the impossible?”
RP: “We prefer to think of them as ‘miracles.’”

One of the miracles attributed to Jesus, and indeed one that’s considered among his most impressive, was telling a storm to be quiet because he was trying to take a nap, and the storm immediately calmed. Is that impossible? Of course not.

When I was hiking the Appalachian trail, and experienced a week of temps in the teens and then 2 days of freezing rain and ice on the trail, I was not a happy hiker. Passing a day hiker, he made a comment that I was looking very down, but also said cheer up today at 11:54 the sun will come out. I thanked hike and was hiking on and thought to myself that was a very weird time to indicate, not noon, or 11, but 11:54. (just a note the exact time I forget but it was some odd such number). I just thought it was a nice gesture and hiked on though the cold misty rain. When all of a sudden the clouds and mist/fog I was hiking through just blew away, and I was in the sun. I checked my phone and saw it was the exact time he said it would happen to the minute.

And this is a miracle by you?