There are a lot of board games out there where you add up Victory Points at the end to determine the winner. Off the top of my head, Agricola, 7 Wonders, Between Two Cities, Castles of Mad King Ludwig, Scythe…and that’s a small fraction of that game space. There’s no way to tell what the game is just from that snippet.

I’m really unclear about how that “asparagus” is supposed to have worked. Surely, even WWII-era gliders or paratroops would be able to avoid poles spaced 30 meters apart, while landing. Even if you string barbed wire between the tops, that still leaves holes much, much bigger than a human (your parachute might catch on one, but it’s not like you were planning on reusing it).

Surely, even WWII-era gliders or paratroops would be able to avoid poles spaced 30 meters apart, while landing.

What if you have a 100 or 1000 landing in the same area? It’s not about stopping single troops or even platoons, but denying the area to mass formations. Add a couple crashes and some hostile fire and the area denial has a real impact.

I’m really unclear about how that “asparagus” is supposed to have worked.

The stuff is very hard to spot from the air. Many glider landings were planned for less than full daytime. The glider’s landing approach angle is shallow enough that if there was any wire it’d be real hard to go over one and safely below the next even if you see it coming. Last of all although the gliders didn’t roll/slide very far across farmland after touching down it was far enough that you’d stand an appreciable risk of hitting one during deceleration even if you missed them all in the air. When the outer part of the wing hits one the whip-around is pretty severe; you can injure people and or break equipment loose that crushes people. As always wounded enemy are better than dead enemy; each wounded man takes somebody else out of the fight to help him, at least for awhile.

Or at least that’s the idea behind asparagus. As noted by wiki, it wasn’t terribly effective. What I can’t say is how much that lack of effectiveness was from folks landing amongst it unscathed, or from mission planners avoiding those areas and landing elsewhere. With perhaps those other places being more heavily fortified with defenders. Passive defenses are an economy of force play. The cheaper and quicker to erect the better.

A common army tactic is called canalization which amounts to "steer the enemy away from (or flat deny them) this terrain and of necessity they’ll end up on that terrain instead. Where we’ve set up a jolly fine reception.

A common army tactic is called canalization which amounts to "steer the enemy away from (or flat deny them) this terrain and of necessity they’ll end up on that terrain instead. Where we’ve set up a jolly fine reception.

“And the enemy, in blue, will undoubtedly pursue, for that’s what you depend upon an enemy to do.” 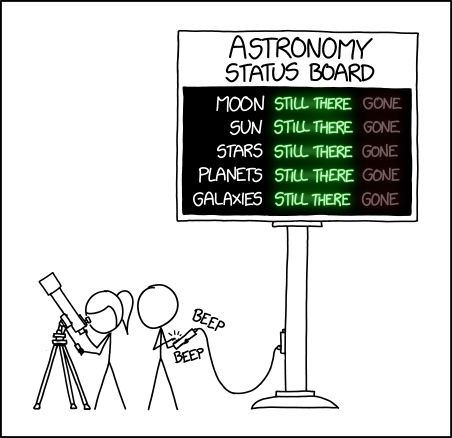 Junior astronomers hate getting put on board update duty, but someone's gotta make sure that stuff is still up there.

“Overhead, without any fuss, the stars were going out.” 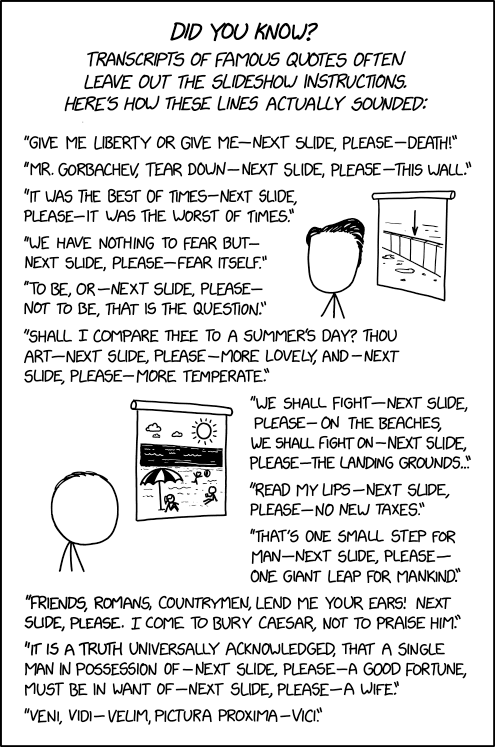 The joke in this one was overdone, especially with it always being the exact same phrase (aside from the Latin at the end). (Click to the next one?) It would have worked better if it were either shorter, or (could you advance it, please?) they mixed it up a bit.

Also a rather similar joke has been around for ages 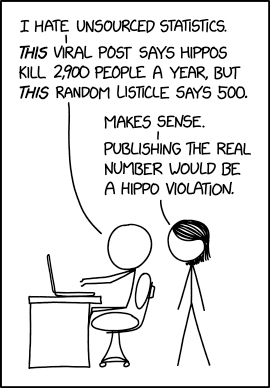 It's cool how, when there's a number lots of people are curious about, but which isn't easy to measure, some random guess will get cited everywhere and become the universally quoted value. Unrelatedly, did you know there are 850 trillion waves in the ocean?

I read somewhere that there’ve been 2471 xkcd strips.

A variation on this classic which proves there are only 978 xkcd strips.
My site is my cite:

I just read a pop-science book by a respected author. One chapter, and much of the thesis, was based around wildly inaccurate data which traced back to ... Wikipedia. To encourage people to be on their toes, I'm not going to say what book or author.

If there's no dome, how do you explain the irregularities the board discovered in the zoning permits issued in that area!?

I hope they figure out Fuzzy Blob - it shows up on a lot of my pictures too!

Gale was often Male, where Gail was generally only female.

Also Gale Gordon goes pretty far back. (best known for Lucy Shows)
Also had Gale Sayers of the Chicago Bears and there was a Senator from out west named Gale.

"Okay, that was weird, but the product reveal was normal. I think the danger is pas--" "One more thing." "Oh no."

No, don’t worry! A staggering number of people will survive!

I am so stealing that.

Very close to “Alarming”, I expect.

Very close to “Alarming”, I expect.

Meh. I usually* only step on a scale at the doctor’s office, which I would not have done had I not stepped on a screw.

That is, unless you meant the number might be alarming.

*I say usually, as I did buy a cheap scale on Amazon to weigh my dog to determine the right amount of flea medication. The way I do it is that I step on without holding him, and then while holding him.