Aww, Bobby’s all grown up!

And now that I check up on it… “Exploits of a Mom” was published in October 2007. If Bobby had just been enrolled in school for the first time then, then he’d be 20 years old now. So he is, in fact, all grown up now.

On the other hand, it’s also apparently canon that Bobby never really took to computers (unlike his sister Help I’m Trapped in a Drivers License Factory Elaine), so maybe this isn’t him after all.

I had something similar happen on a Unix system back in the 90s. When inputting a new password, I mistyped a character, so I back-spaced and retyped. I made the same mistake on the repeat password input. Everything seemed fine.

The next time I tried to login again, it failed. I carefully typed the password very correctly. Failed. I left to do something else, came back and it worked! I had made the same typo and corrected it.

Yes, the backspaces were embedded in the password. The terminal was misconfigured, so the backspace key emitted an ASCII-8 instead of deleting the previous character. Fun times.

I often wondered if it was possible to do that. 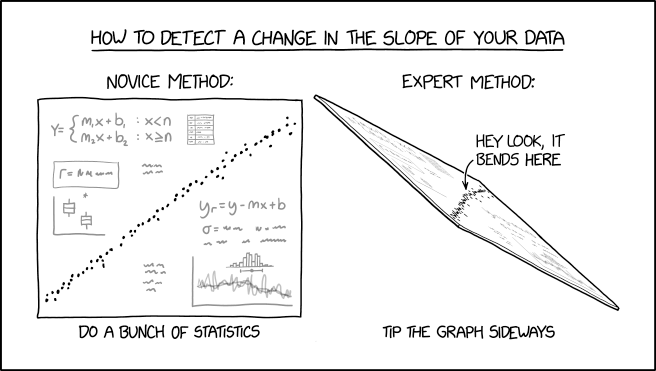 Squinting at a graph is fine for getting a rough idea of the answer, but if you want to pretend to know it exactly, you need statistics.

What If 2 Gift Guide 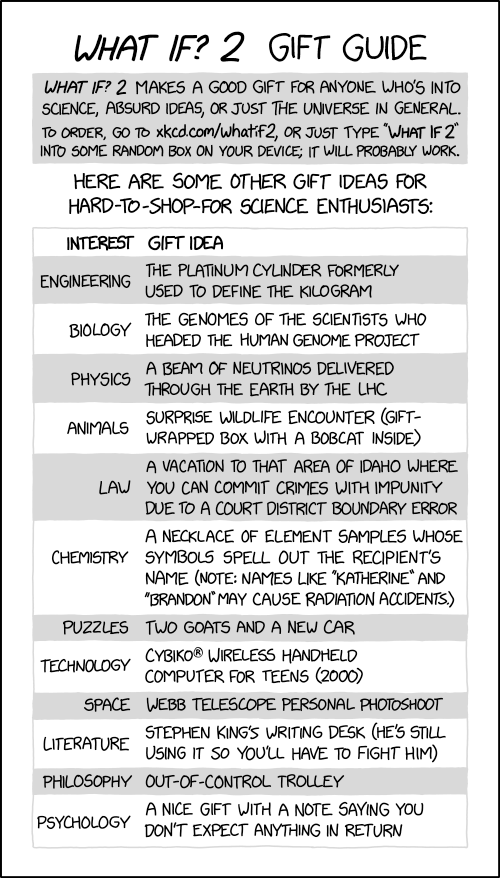 BABIES OR LITERATURE BUT NOT BOTH: Baby shoes

Seems to imply that ‘science enthusiasts’ are interested in just about anything… which sounds about right. Of course, he then missed many subjects. Medicine/psychology: Collection of research papers on developing more effective placebos.

That would be awesome to own the old kilogram prototype! Actually, just having a replica would be pretty cool.

Tell you what, I like you, I’ll be willing to give you fifty bucks for it.

CONFLICT OF INTEREST STATEMENT: The authors hope these results are correct because we all want to be cool people who are good at science.

Just happened to stumble on a new post right as it came out. No one had even said anything ExplainXKCD yet.