Jameis Winston won by a landslide. I wouldn’t be surprised if he wins again in the next year or two. Matching Archie Griffin’s two Heismans in 74 and 75. I think Jameis is that good. He’s just a Freshman. Just imagine how good he’ll be as a Junior and Senior.

If he doesn’t get injured. Any early predictions on his NFL career? Think he’ll be the next Peyton Manning?

Tony Dorsett won in 76, has talked to Jameis’ parents and will be trying to mentor Jameis. Help him learn how to avoid trouble and keep his focus on football. Everybody will want a piece of this kid. He’s going to need really good representation as he transitions from college to the NFL. I hope guys like Tony Dungy will step up and help this kid. I’d like to see him ten years from now just as respected and successful as Peyton Manning. 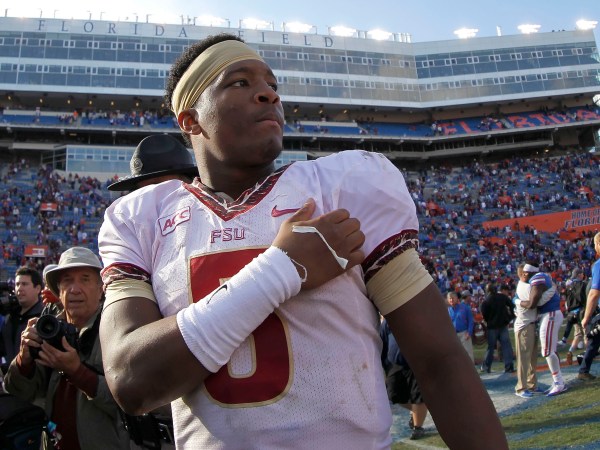 Tony Dorsett has some advice for Jameis Winston. Dorsett, who won the Heisman Trophy in 1976 when he was a senior running back at Pittsburgh and then of course went on to have a Hall of Fame career…

Winston was named the 2013 Heisman Trophy winner Saturday during a ceremony in New York that was broadcast nationally on ESPN.

He was the second redshirt freshman and youngest player ever to earn the award.

He received 2,205 points. McCarron came in second place with 704 points, creating the fifth-largest margin of victory in the modern Heisman era, despite Winston being left off 115 ballots. His 668 first-place votes are 9th all time.

I realize a lot of things have to fall perfectly in place for any potential Hall of Famer. Which team drafts the player. The player development program that team has in place. Veterans that can mentor the player. Theres always the chance of a career ending injury. Talent alone isn’t enough. There’s some luck involved too.

Then theres all the off field land mines. The big money and all the negative stuff that goes with it. I just hope Jameis gets the right mentoring now before things get too crazy.

I’ve seen most of the FSU games and this kid is smart. He makes really good decisions in the pocket. I’m looking forward to watching his college career.

If he can keep his head on straight, I look forward to his long NFL career. Johhnny Football comes across as a punk, tho I think he is an awesome player.

Winston has already had his share of off field controversy (I don’t think it’s all settled yet, either), but he seems to be doing fine football-wise even with that. So, maybe he’ll be able to weather the storms of being young, rich, and in the public eye.

I think his QB talents will transition well to the NFL. Should he start first year drafted? Why not? Bradford, Newton, Dalton seem to be doing relatively fine. Other fine college QBs (V.Y.) have crashed and burned in the NFL, tho, so I can’t really say he’s a sure thing.
.

Well, for him the off-season is pretty busy since he’s expected to be a starter for the ‘Noles Baseball team as well (RF and some pitching). In fact, Jimbo referenced that in the Heisman press conferences. That was also the source of the thanks to “number 11 and Meat” (Mike Martin and Mike Martin Jr respectively) during his Jameis’ Heisman speech. As the local sportswriter noted, it’s gotta be a first for a Heisman winner to also thank his baseball coaches.

I can’t understand why a Heisman winner would continue to play college ball. One unlucky hit, and tens of millions of dollars go flying out the window. In the very unlikely event that he’s actually interested in earning a degree, he can do it during the off season.

After reading the posts over in this thread, guess it’s no surprise to see which posters are showing up here for the celebration.

I can’t understand why a Heisman winner would continue to play college ball.

As opposed to what? The NFL requires at least one more season (I heard he’s a redshirt freshman, and I’m pretty sure you can’t enter the NFL draft until three years after you start college), and I doubt sitting out a year is going to do him any favors with NFL owners. (It was four years at one time, but I think when Herschel Walker joined the USFL after three years at Georgia, the NFL changed its rules.)

Then again, I thought I heard him mention in his Heisman speech that he’s a two-sport star (was he offered a baseball contract right out of high school?), so it’s possible that he can skip football and play just baseball next year; the last person I remember doing that (Bo Jackson) did rather well for himself when he did join the NFL after “a year off.”

Yeah, he plays for the baseball team also. Skipping a year of playing would be pretty damaging to his professional aspirations also though. Not as damaging as a career ending injury of course, but the chance of that are fairly small.

Two sport athletes are so rare these days. He’s planning on staying in school too. Smart kid.

Jameis Winston still has heart set on playing baseball, too

Even after winning Heisman, QB plans to play both sports.

Speaking to reporters late Saturday night after he won the Heisman in a landslide vote, Winston said he still has every intention to play baseball for the Seminoles this spring. He even gave a shoutout to “11” and “Meat” — head baseball coach Mike Martin Sr. and assistant coach Mike Martin Jr. — during his acceptance speech.

As a freshman, Winston played outfield, designated hitter and pitched in relief.

Winston will be eligible to enter the NFL Draft following the 2014 season, but he said that’s not in his plans right now.

“Education’s always first thing,” Winston said. “So when people keep asking, ‘Jameis, are you leaving next year?’ and all this stuff, I say, ‘I need my education.’ That’s what it’s really about.”

Two sport athletes are so rare these days. He’s planning on staying in school too. Smart kid.

I will give you four hundred million to one odds that he does not in fact stay in school until he graduates.

If they are asking him to graduate then he probably will.

But it’s true those multi million dollar NFL contracts are hard to turn down.

I hope he at least completes his junior year. A lot of athletes finish up their degrees by taking classes in the off season.

This guy was accused of rape before he won anything, and Manziel still hasn’t done anything that bad.

And if you actually believe his platitudes about education, I have a bridge to sell you.