Talk about the virtual conventions here! I figured one thread for both would be easier to compare and contrast since they’re not happening at the same time.

It may be petty, and the Republicans probably wouldn’t care anyway, but I will watch the DNC but not RNC.

Was never interested in conventions in the past when they mattered a lot more. Definitely not interested in a virtual one. A virtual convention is just going to be like those State of the Union Response broadcasts. Without a crowd it’s going to be extremely lame. Even the best orators like Obama need an audience to bounce off from. To fire up and get fired up by. You’re not going to get that from a video message in your living room.

These start today, correct? I might watch some of it, but not all.

Starting now. And so far, one of my hopes is being met - that the Democrats, having known this would be virtual for a few months, and having the resources of Hollywood to call upon, would present a slick and professional appearing event. And hopefully, the Republicans next week, having had to scramble last minute for a virtual event, and being run by clowns, will look like a pile of garbage in comparison.

Doing a montage of interviews with ordinary Americans right now; pretty standard convention stuff. Rick Telesz is a farmer from Pennsylvania who is apparently going to go disco dancing after his interview is done, if I am judging correctly by the size of his collar. Man, that thing is distracting!

I’m watching while I work on another project. I’m not getting much work done and I already puddled at the opening.

I hate it when my emotions are shamelessly manipulated, but even as I recognize it happening, it still works. Like a balm to the soul.

I read an article which reviewed the Texas Republican Convention, which was very last minute, and it was a pretty bad showing.

I think I saw this link somewhere else on SDMB, just don’t remember where.

I would say the DNC seems to be making a good effort to adapt to the new platform. I still like the old convention style. I still remember watching Obama’s speech in 2004 and just having my mind blown.

I read an article which reviewed the Texas Republican Convention, which was very last minute, and it was a pretty bad showing.

Then, on Sunday, as committee hearings were being livestreamed, shards of recorded messages from elected officials played seemingly at random and in quick succession, like the first flashes of a very boring acid trip.

Now, that is writing.

Without a crowd it’s going to be extremely lame.

I usually don’t watch conventions because the crowd noise and applause disrupts and distracts the speakers. This virtual one is perfect for me and I will watch it. (But not the Republican one. They can and will go to hell.)

Michelle Obama is a fine speaker.

Michelle Obama is a fine speaker. 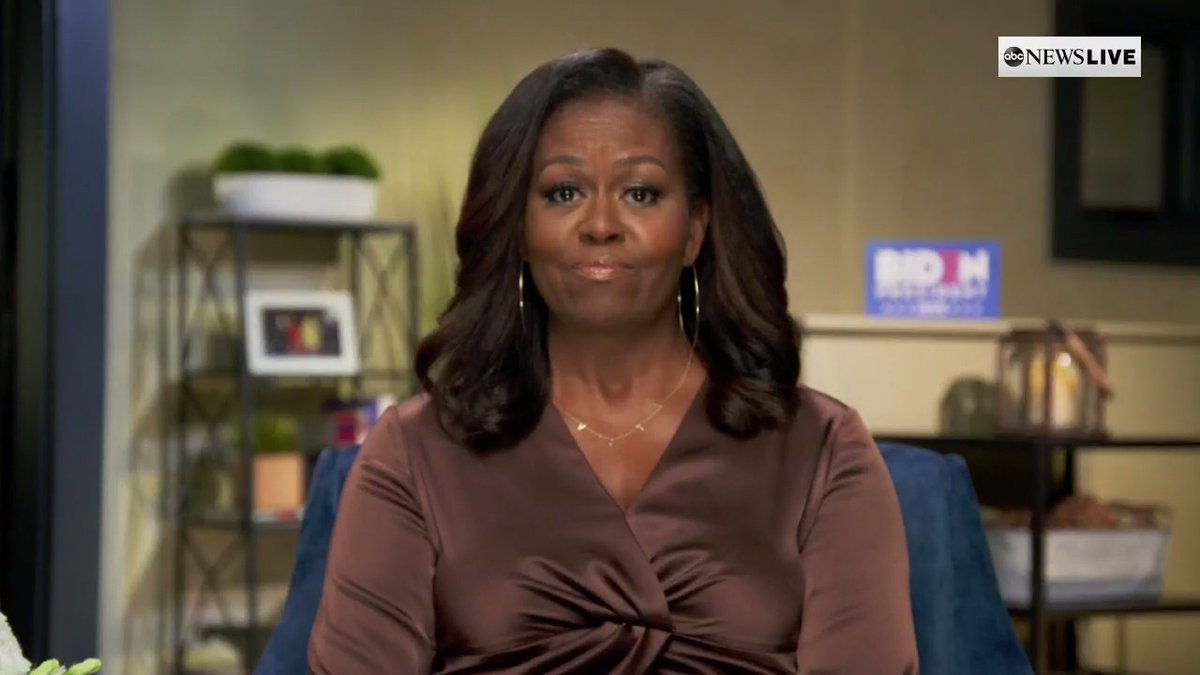 @ABC
Michelle Obama quotes John Lewis in closing comments: "When you see something that is not right...you must do something." "That is the truest form of empathy," Obama says. "Not just feeling, but doing. Not just for ourselves...but for everyone." https://t.co/ox37AApufY https://t.co/OdHmGgtc3v
Fiddle_Peghead August 18, 2020, 3:23am #15

Way to go, MSNBC. I got all rested up to watch the convention, and still fell into a snooze about 15 minutes in. Even Michelle Obama, despite having a lot to say, was boring. Oh, but then, I hear Stephen Stills plucking out the ominous single-note beginning to “For What It’s Worth”, and I sit straight up, ready to see what he and Billy Porter do with the Buffalo Springfield classic. Not five seconds later, I hear Brian “Look, I Should Have Been a Comedian” Williams flapping his useless gums together, cutting the song off and turning it over to the Joe Biden Campaign, otherwise known as the MSNBC panel of cable news entertainers. Sheesh!

Michelle Obama just blew me away. Holy SHIT, that was the greatest political speech I have ever seen. Recency bias? Maybe, but just, wow. On the CBS coverage, Valerie Jarrett pointed out that this was why they called Michelle “The Closer”, and John Dickerson (who knows more about political campaign history than anyone) aptly noted that this was like an “in emergency, break glass” kind of speech.
If you missed it, or just saw highlights, I urge you to watch the whole thing. It’s only eighteen minutes, and everyone needs to see this. https://www.youtube.com/watch?v=b-0BSwQg540

Agreed. It was a wonderful speech.

I think the speach spoke to Dopers, but I wonder who’ll really take in what she’s saying if they’re on-the-fence about who to choose. I don’t know. It made me feel better, but I’m not not sure I’m who she’s addressing (or should be addressing).

My preferred part of the night was, of course, Bernie… Because I love the old coot.

I know many progressives on the Biden train… and a lot that aren’t. This WAS the best thing Bernie Could have done in my opinion. He also listed the progressive things that Joe Biden has promised, which will be handy in holding his feet to the fire when the time comes.

Best, most powerful part, of the convention was when the daughter of a Trump supporter told her father’s story of having Covid.

Worst part was John Kasich saying that Joe won’t let the “radical left”…“take over” the party. First off, we know he won’t. Secondly; The reason why Bernie supporters are upset is because Democrats are catering to these conservative assholes when just a while ago people were complaining about Bernie “not being a real Democrat”.

I hope Biden disappoints Kasich. But probably not.

Just FYI: If you don’t want to watch the convention with all the talking heads breaking in every two minutes, I watched the whole thing on Joe Biden’s YouTube channel (on the YouTube app on my TV). I imagine the Dems’ have a channel too.

Michelle was solid, but I may not have been as impressed by her as others, so what may follow my be unpopular and get me flamed: I was hoping for a little more personal endorsement of Joe from her. Like, personal anecdotes on the man and leader she knows him to be. We know that Trump’s bad, how terrible things are right now, and how even more terrible things will be if Trump’s re-elected. I was really hoping that she, as a person who knows Joe (and Jill) pretty dang well after eight close years together as part of the Obama-Biden Team, would’ve come out stronger and spoken more on his personal strengths and qualifications to be our next president, not just that he’s only thing standing between us and utter ruin as a people.

But ffs, that closing music video with Billy Porter and Stephen Stills? Was that produced by Titus Andromedon?

To my mind, it is clear who Michelle Obama is addressing. She is talking to women, specifically mothers and more specifically women of color. It’s no secret that the Democratic party relies on enthusiasm from African American women and that low enthusiasm and relatively low African American turnout has been cited for the results in 2016. We don’t just need their vote. We need them to get energized and we also need to sway the suburban soccer moms that Trump is counting on.She knows her audience and I hope it works.