A Quiet Place (SEEN IT Thread)

I loved this film so much. It’s a fantastic story, mostly told without words.

No spoilers yet. Wanna see who else has watched it. 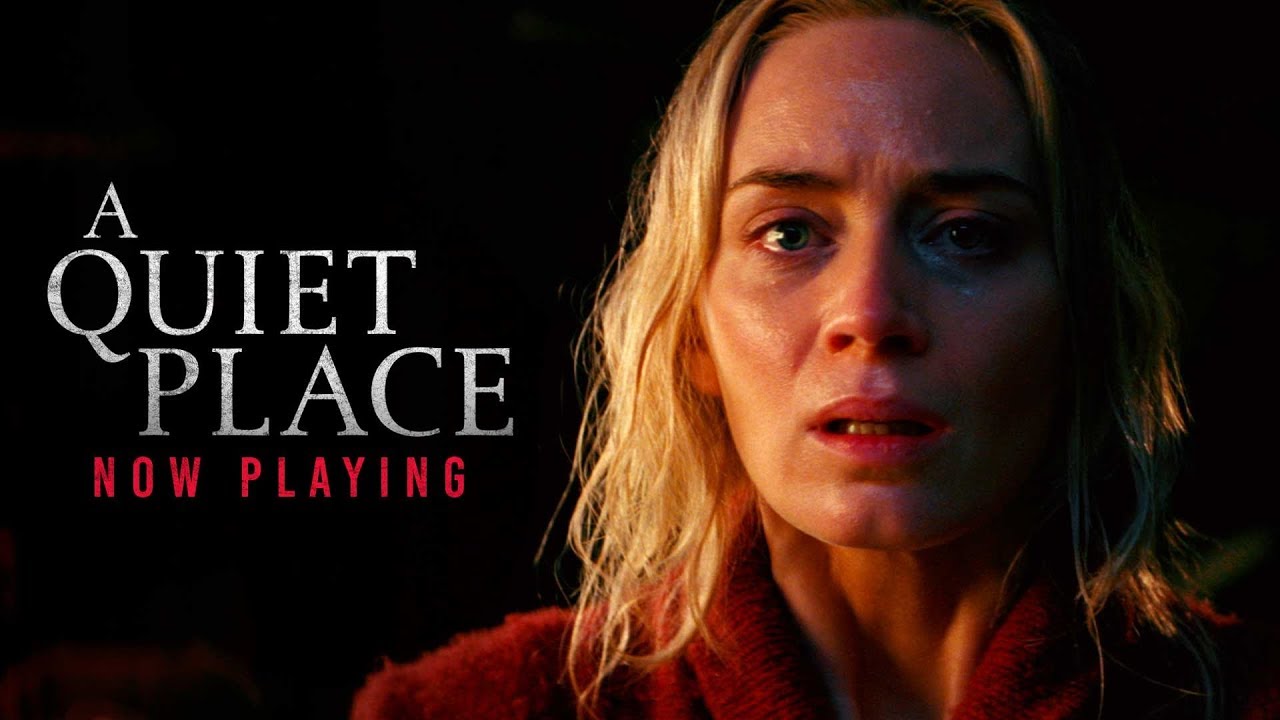 I’m not normally a fan of scary movies, but I want to see this one. It’s a cool concept, and I like the actors involved. Also, I’m pleased that the daughter, who’s deaf, is played by a deaf actress (Millicent Simmonds, known for Wonderstruck).

For what it’s worth, if my survival depended on keeping my kids quiet I’d be dead in about 2 seconds.

It isn’t gory. But it’s definitely scary. And I don’t ever remember rooting for a whole family in a horror movie ever as much as this one.

I just came back from seeing it. What a good movie. It’s simple but original (I thought) and effective. My stomach was in a tense knot throughout the movie. There are a few jump scares but JK keeps the tension level high all the time. Yet it’s a movie about family, not monsters. I like how

they don’t explain much of anything. The movie starts at Day 89 and you only get backstory from some of the newspaper clippings.

There are scenes in the trailer that aren’t in the movie. Some might find that annoying but I looked at it as the trailer being a supplement to the movie.

Yes, Millicent was fantastic in Wonderstruck, a fantastic movie. I wish it had gotten more attention.

Here’s a funny one. When the theater emptied, there was quiet conversation. Then all of a sudden, a car alarm went off and a couple people ran.

I froze for a second myself.

I just saw it and it was so good! Very tense, well acted, well directed. Very good kid actors. It was effective having the movie be so quiet so much of time, other than that meant you could hear all the noise that the audience was making.

I just saw it. It was a good movie but it had some plot holes I suppose.

[spoiler]Why didn’t anyone trap the monsters? Even if they are indestructible, why couldn’t they be baited with sounds and then trapped in some kind of cage that they can’t rip through?

As far as them being indestructible, why did the shotgun kill one? Was it just that the sound make them lower their head armor, and then you could kill one?

Also why didn’t any government experiment to figure out how to use sound to make them lower their armor?

Rather than making no sound, why not make sound everywhere? That way the creatures are constantly confused because everywhere has sounds going off[/spoiler]

Enjoyed it, but I think I may have gone in with expectations a bit too high. Like Wesley Clark, I kept wondering why they didn’t try to trap the monsters, especially since they had power (and was the power grid still up? Or were they using batteries?). Also, since they had power, why’d they use the rockets to distract the monsters- surely loudspeakers would be just as effective. I was also surprised they only soundproofed one room.

And maybe that was my problem with the movie- I couldn’t shut my brain off, I could’t stop try to find loopholes around the rules set up in the movie.

I thought the set-up helped with some of the questions:

[spoiler]If we had seen things starting from day 1, or if we had seen things from the government or scientists point of view, then I would want a lot more things explained, and want to see them trying more things. I’d also want to know more about the monsters, and where they came from, and how many of them there are. But since it was from a normal family’s view, and we are seeing it start at day 72 or whatever, we just see what information they’ve pieced together and so I’m not too bothered by the other questions.

For all we know there are some parts of the country or world that has been able to trap or capture them, but the monsters have caused enough destruction that information isn’t traveling.

Also, the gimmick that the monsters are attracted to sound is clever, because making almost any trap would make a lot of sound. The monsters seemed fairly big, quick, and strong, I would think you would need a strong metal cage to capture one, and I have no idea how you’d make that silently.

The plan of making constant noise does sound like it could work, but also like something that would require a lot of power, and I’m not sure you can rely on that lasting forever. Like any system it could work well but be very bad if it failed. [/spoiler]

Hmmm… I didn’t consider some of the things brought up, like:

[spoiler]Getting loudspeakers mounted or lugged around would be a bigger risk. (I thought about loudspeakers too.) But fireworks also send off a signal to any other survivors like they used the fires on the towers. And toward the end, the other fires weren’t lit, assuming those survivors died too.

From that and the lack of a TV or radio signal, I was guessing we did pretty shitty on this one. Like someone else mentioned. There could be survivors somewhere around the globe. I felt the family was one of the very last on Earth!

Why capture one? Doesn’t seem like we’ve studied them at all, or Lee would’ve known about something of their behavior.

My only problem was… what the fuck with the nail? Why one upturned nail in the stair? Who built the stairs? A sadist?

We saw it yesterday. Quite interesting concept, though a ton of plot holes and questions.

Since this is a thread about people who’ve SEEN the movie, I won’t spoiler tag my comments.

My biggest beef, aside from the exposed nail, was the manicured cornfields on Day 400+. Corn doesn’t plant itself into acres of nice, neat rows, nor does it harvest itself. After one growing season where it was left to its own devices, that field would have deteriorated into a mess of decaying corn stalks and unpicked corn cobs.

Oh, and the lack of bugs. Absent humans, it would take the spiders and roaches exactly 5 days to take over the world.

I liked it. A small, intense movie with an original concept.

As far as all the, “Why didn’t the government do this…” talk:
Maybe they did and either:

Corn doesn’t plant itself into acres of nice, neat rows, nor does it harvest itself. After one growing season where it was left to its own devices, that field would have deteriorated into a mess of decaying corn stalks and unpicked corn cobs.

Oh, I’d totally forgotten about that giant field of corn. It bugged me every time it was shown. I could understand them growing a small garden for personal consumption, but that massive crop of corn was completely unnecessary.

One detail I liked that I noticed was that in the opening scene in the grocery store you could see all the “loud” food (Chips etc.) was still on the shelves.

One detail I liked that I noticed was that in the opening scene in the grocery store you could see all the “loud” food (Chips etc.) was still on the shelves.

I noticed that, too. Under the movie’s premise, it occurred to me that trying to open a bag of chips could be deadly.

On a related note, during that scene, I was very aware of how loud cellophane wrappers are, as a few members of the theater audience fiddled with their movie snacks. Fairly quickly, though, the audience went silent, too.

Oh, I’d totally forgotten about that giant field of corn. It bugged me every time it was shown. I could understand them growing a small garden for personal consumption, but that massive crop of corn was completely unnecessary.

…And impossible for a family of four to plant and harvest without really LOUD combines and seeders.

Of course, after telling this to my husband, he said, “Maybe the aliens planted it.”

I did think the corn was odd–and if we hadn’t been given a timeline it could be hand waved as being planted and maintained before the monsters. (no reason the opening scene and the rest of the movie needed to take place over a year apart- the mom could have been a few months pregnant but not showing too much in that opening scene.)

For me little things confused me --the fire towers, the old couple, and if the daughter’s new implant was actually working at any point.
My wife explained that she thought the towers were the other nearby farms communicating to each other that they were ok. We see two (or was it three) that first night in the beginning. The next day when the dad and son go out, their path takes them past the house with the dead woman and presumably her husband who is so distraught he suicides by monster. I didn’t understand why they were there but if my wife is right they were purposefully checking on their neighbor…but that wasn’t explained in the movie.
Overall I thought they did a good job establishing when we were observing from the deaf girl’s perspective and when things were not…but when he put in the new implant, she snapped her fingers and I didn’t hear anything so I assumed it didn’t work…but she kept it in and on. Was it supposed to be working or not? (I feel like a very old person right now–if I missed obvious things)

Also for a movie that used so much “plant and pay off” for items and locations… I think they trolled the audience with the dad’s death, I couldn’t believe that they so beautifully framed a shot with the big pitchfork but had him grab the axe instead. I assumed when he got back to his feet and got the monsters attention that he’d have also grabbed the pitch form and was going to “trick” the monster into impaling itself on it.

I was wondering why they didn’t live right next to the waterfall? Or maybe the ocean?

My off the top of me head fanwank:

They are not “Spaceship invader aliens” but say…eggs on the interior of a meteor shower. They grow fast, lay more eggs fast, and just tear loose. The meteors hit all over the world so that explains (if needed) how the world is overrun. Civilization is going to fall very quickly. Sure people are probably holed up and doing quite nicely in NORAD like installations and emergency atomic shelters for government officials. But most of us are fucked. As for why there are so few by the movie…they naturally run in packs of three by adulthood, killing their smaller, weaker siblings until the three strongest are left.

And who knows…maybe scientists holed up in Fort Knox or someplace have figured it out but its going to take a lonnnnnnnng time to properly equip people to go out and eradicate all these things.

NOTICE: END OF THE MOVIE SPOILERS. YOU’VE BEEN WARNED!

I didn’t quite understand the ending of the movie. Was this a “last stand” type of situation, where they’re going to take as many of them with them as they go (since the family found at least one way to kill them). Or was it, now we know how to kill them so we’re going to do it. Did you hold out any hope that the family was going to survive, or did you think they were toast?