Actually Pretty Funny: A time when someone you hate made you laugh

I hate Donald Trump, all his advisors, and his entire worthless family with the passion of a million burning suns, but something he said in this news article from 2019 made me laugh:

Trump jokes that North Korea's 'Christmas gift' may be a 'beautiful vase,' not...

Trump made the apparent joke about North Korea's rhetoric even as some experts fear the "gift" could be a weapons test.

“We’ll see what happens,” Trump said when asked what he would do if North Korean leader Kim Jong Un does decide to test a new long-range projectile.

Most of the time, his humor is crass, tasteless, and offensive, but that particular joke was objectively funny.

Share with us your examples of this trope-- when someone you hate made you laugh.

If that vase joke made you laugh, then I guess we have different ideas about what is “pretty funny”. For example, Trump has made me laugh. Like that time he walked around with toilet paper stuck to his shoe.

Alleged satire site Babylon Bee recently made fun of Rachel Levine for being trans (assholes!) and got banned from Twitter over it (good!)

But their response was the headline, “Babylon Bee writers struggle after Twitter bans one of their two jokes,” which was genuinely funny.

I wonder if laughing at Melissa McCarthy as Sean Spicer on SNL counts. I can’t recall finding her funny any other time but that was great.

Only thing is I don’t hate her, I just don’t find her funny. I’m not big on cringe humor and she is mostly cringe humor.

I don’t hate Rob Schneider, but I rarely find him funny.

But the “You can hide your weed in it” sketch is hilarious.

P diddy is normally very irritating person to me. But his role in “Get Him to the Greek” was absolutely hilarious and the best part of the movie.

Likewise, I wouldn’t go so far as to say I hate Tom Cruise, but he’s always left me cold and wondering when he will return to his home world. But his Les Grossman in Tropic Thunder was one of the funniest things I have ever seen.

Dennis Miller suddenly turned far-right-winger, but his bigger sin is that he also turned Not Funny. {aside: I’ve heard 9/11 was his turning point}

But before then, he did a series of short “Rant Zone” pieces. His quick takes were hilarious, with serious commentary on subjects like… Education: “Teachers said they love their jobs, so we realized we could screw them over on their pay. Look, if they’re buying chalk and erasers for their classrooms, let’s at least exempt them from any federal income tax, okay?” MUCH APPLAUSE … {aside: that was all paraphrased from decades ago}

Mine’s another Trump one (and ditto the burning suns): I thought the joke he told about Michelle Obama getting praised, and Melania getting criticized, for saying exactly the same thing, was hilarious.

Not sure whether he came up with this, or it was some hired writer, and I don’t know that I should hate that poor schlep.

I find Andrew Dice Clay to be intensely unfunny, but I think I chuckled at “Little Boy Blue…he needed the money”.

I laughed when Ann Coulter described Mike Huckabee as “the Republican Jimmy Carter”.

I despise Andy Dick, but he still cracks my shit up when I watch old NewsRadio reruns. Especially the episode where James Caan visits the studio.

“We’ll see what happens,” Trump said when asked what he would do if North Korean leader Kim Jong Un does decide to test a new long-range projectile.

I don’t think this was an attempt at a joke.

(triple the burning suns with extra sauce) I did think it was funny when he made fun of his Wife for using the same speech as Michelle Obama did.

Since people are mentioning Trump---- Ronald Reagan had a good joke during one of the 1984 Presidential Debates with Walter Mondale (for context at the time Reagan was the oldest person to run for the Presidency):

“I will not make age an issue of this campaign. I am not going to exploit, for political purposes, my opponent’s youth and inexperience,”

I found Trump’s comment about “little Rocket Man” when he was referring to Kim Jong Un of North Korean nuclear fame and referring to Covid 19 as “Kung Flu” somewhat humourous.

Years ago in my hospice days I had a client who loved to watch the Golf Channel. So I would turn it on for him and we would watch golf. For hours and hours and hours…

Anyway, one of the regular shows was something like “Golfing with Celebrities.” One episode had Rush Limbaugh as the featured “celebrity.” On that particular day wherever they were filming that particular game, it was very windy. Rush was bitching about the wind and suddenly says “it’s like a mother-in-law convention here today.” I confess I laughed at that and further, I even stole his line to use myself.

The list of people that I really dislike is fairly small. If one of them did something funny I would consider it on.its merits. It’s happened several times. An odd characteristic shared by most of the listed is that they are largely unable to laugh at themselves. This trait makes people less likely to be amusing, but it does happen.

I feel like they’ve used that joke before, but the best political humor is self-aware. This is a pretty good Trump one, not mean spirited and self deprecating. It’s gotta happen once in awhile I guess.

I just never liked Ricky Gervais, kinda smug and he has an extremely grating laugh. But the Oscars was glorious.

Mitch McConnell just did this: 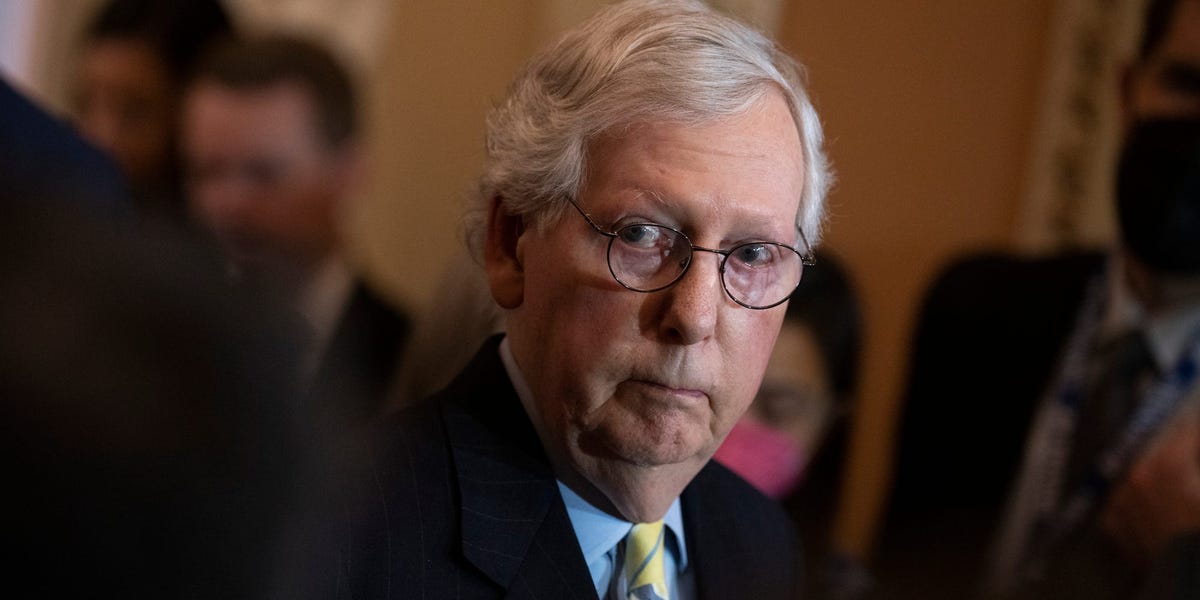 “You are known for playing a ruthless style of politics,” Axios’ Jonathan Swan told McConnell during an interview. “Where do you draw your moral red lines?”

McConnell laughed, then replied: “I didn’t realize I was known for playing a ruthless — I thought, my wife thinks I’m a really nice guy.”

I gagged; does that count?