There’s some commercial on TV lately that advertises, uh, I can’t remember…I phones? ATT phones? I can’t remember. But, there is some mention of MP3s, or music, and they mention Lady Gaga, and there’s some kind of technodisco music played immediately. If that’s her, she sounds exactly like…uh, I can’t remember…
Kind of Annie Lennox w/a remix? I don’t know, and I don’t want to waste a lot of time trying to track down a song that may be the only one of hers that sounds like that, while the rest of them are crappy. (Her visual appearance seems to me like Marilyn Manson and Cyndi Lauper, so it shreiks tepid to me, which puts me on my guard-cutting edge, 20-30 years ago!)May not be, but I don’t wanna waste the time if it is. So, does she sound EXACTLY like somebody from the mid 80s to you, as she does to me?
If so, whom? And, do you know the song from the commercial, and will you tell me what it is?

For me - Madonna. Early Madonna.

Madonna for me too.

She reminds me of Madonna. She looks like Amy Winehouse, and has admitted to dyeing her hair blonde for that reason.

Gaga is inspired by glam rockers such as David Bowie and Queen, as well as pop singers such as Madonna and Michael Jackson.

Music producer Rob Fusari, who helped Gaga write some of her earlier songs, compared her vocal style to that of Freddie Mercury. He nicknamed her Gaga, after the Queen song “Radio Ga Ga.” She began to use it as her stage name and was known thereafter as Lady Gaga.

And here’s Lady Gaga performing on the piano at NYU (where she studied music) before she was famous, and before she had a stage name: 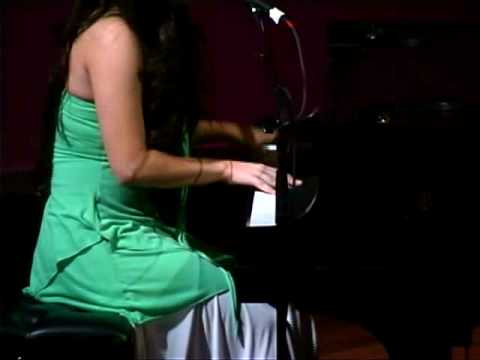 In some of her songs she sounds very like Róisín Murphy and Moloko.

Gaga trivia from Wiki:
And here’s Lady Gaga performing on the piano at NYU (where she studied music) before she was famous, and before she had a stage name:

I never cease to be amazed that people hold on to this stuff. Didn’t listen to the whole thing but I like her much better as her than her persona.

Her persona is certainly Madonnaesque, but I don’t think she *sounds *like her. Based on my admittedly limited experience of her work, she appears to be able to actually sing.

In that early pre-Gaga performance, young Ms. Germanotta has definite shades of Norah Jones in her voice. She’s definitely a talented vocalist who’s nearly eclipsed that with her talent for the show.

In that early pre-Gaga performance, young Ms. Germanotta has definite shades of Norah Jones in her voice. She’s definitely a talented vocalist who’s nearly eclipsed that with her talent for the show.

Perhaps that will translate into having a career similar to Madonna. If she’s actually got a decent voice maybe Gaga will be able to change her image from time to time to prolong her career as Madonna has.

The first time I heard her sing, her voice reminded me of Debbie Harry, the frontwoman for Blondie.

Reminds me of Gwen Stefani and Madonna.

Her voice though reminds me of mid-1980’s bubble gum pop, like Debbie Gibson and the music sounds like the 1980’s disco electronica style music which played in gay bars. I never knew the names of the artists, but I knew after a few drinks it was great to dance to.

I wonder if she’s going to do a John Cougar Mellencamp - get famous with the personna first and then be herself later.

This… if it were a woman’s voice…

Reminds me of Gwen Stefani and Madonna.

Her voice kind of reminds me of Tina Turner, but her style sure doesn’t.

With hints of Christina Aguilera.