I finished watching the Netflix animated series Arcane, based on the game League of Legends (and its spinoffs). Netflix had been heavily suggesting it to me, probably based on the fact that I recently watched (and liked) Castlevania.

It takes place in a steampunk-y world with magic where the rich folks live on the surface and the poor folks live in a polluted underworld. I started watching the first episode but it didn’t really grab me. Then I played the game Legends of Runeterra (a video game along the lines of Magic: The Gathering) a little bit and that piqued my interest about the characters (as well as spoiling some future events).

Anyone else watching it?

I’m part way through. I love the art style. The story has been solid.

I also have issues with the lower city layout.

I watched the trailer earlier, and it seemed like they were going through great pains to not show many moments of speaking or facial emotions on the characters. That didn’t seem to bode well for the animation quality. 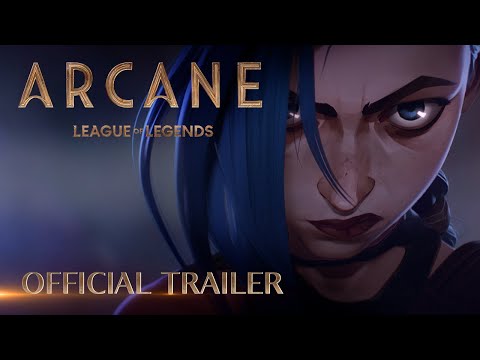 One other comment: I couldn’t tell if the Sheriff guy was supposed to sound Australian or not. I thought he sounded Australian about 40% of the time. The voice actor moved to Australia when he was 8, but I wasn’t sure if he was trying to put on an American accent or not.

I just finished it and was entranced-the animation on the whole is amazing and the plot was great. The layout seemed to be the lower class area was indeed in a trench (whether natural or manmade) and the upper-crust on a hill. I was up late thinking about the ending in which Jinx is trying to make Vi decide if she’s Powder or Jinx and the Council is voting on whether to make war or peace with Silco and the slums. It ends with Jinx accidentally killing Silco and in grief firing a rocket at the Council chamber just as they’re voting in favor of peace. Whew! I know nothing about the game and don’t really care, but it was pretty good.

I finished it this weekend. Liked the look of it and some of the characters, but found the story somewhat weak. I had two main problems with it:

Jinx was a homocidal maniac, and that seemed okay with both Silco and Violet. How many times do you watch her kill people before you realize she needs more than a hug?

I don’t think Silco cared-he clearly had some unresolved issues of his own. Vi really didn’t know another way to approach her and couldn’t see she wasn’t Powder anymore.

Heimerdinger - a 300-year old person who’s apparently learned nothing about people, politics, or life in general. The Trench/Fissure/Zaun was an obvious powder keg. The story starts with an uprising where the oppressed try to cross the bridge into Piltover and are violently put down. How do you dust your hands off and say “Well, that’s that” with his amount of life experience?

Several times in the show he’s reminded that humans just don’t have the same life expectancy. It seems like a passing concern to him, and he’s so consumed with his dislike of magic (which he sees as “progress”) that he keeps suggesting cultural stasis. Also if he’s been a councilor for 300 years, he may have been insulated from the lower classes for decades.

I felt that the show could have been much stronger if it wasn’t tied to the game i.e. certain people are going to be all right because they’re in the game as well. If it had been a standalone story I might have liked it more than I did.

I liked it a lot, especially the different animation styles, e.g. the Ekko vs Jinx fight. They also very interestingly portrayed the bad decision people can take based on their past trauma.
As for the Vi and Powder interaction, it seems relevant that Vi by now has lived half her life in prison being constantly attacked - she sees dead children as the normal cost of a war. It seems in character for her to accept Powder being violent and murdery.
While I love that there will be a next season, this could absolutely be a fitting end to the story. The cycle of violence continues, and there is not a whole lot the characters can do about that now.

I watched the trailer earlier, and it seemed like they were going through great pains to not show many moments of speaking or facial emotions on the characters. That didn’t seem to bode well for the animation quality.

Honestly after watching the whole series, I think its about the best animation quality I’ve ever seen from a TV series (and most movies), especially in terms of facial emotions/expressions.