Are electrical ring circuits used in the US?

IN UK house wiring, outlets are (or used to be?) wired in a configuration called a ring, where there were two outgoing wires from the supply box, and these were wired to multiple outlets in a chain so that each one had effectively two paths to the supply, via the ring.

As opposed to the more obvious ‘star’ configuration where each outlet has its own dedicated connection.

I guess the idea was to provide balancing of current in the wires, and possibly some kind of fault tolerance? And maybe even save a bit on total wire cost?

Was this ever used in the US?

I guess the idea was to provide balancing of current in the wires, and possibly some kind of fault tolerance? And maybe even save a bit on total wire cost?

I think the advantage is that there’s two hot wires and two neutral wires going to the loads on a circuit, and thus smaller wire can be used. But if the load is not evenly split, then one wire might carry more current than the other.

To be clear, multiple US outlets can be wired in parallel, not necessarily a star configuration, but no ‘ring’.

Understood. I’m not sure what the code says about it though: are they allowed to be chained off the first outlet the cable reaches and the others are ‘spurs’? Or does there have to be a junction box distributing to them?

My son-in-law is training to be an electrician, and discussions come up about differences between UK and US rules. I have an EE degree and wired a few houses back in the day for friends, but it’s been a long time since I looked at the code books!

Right. I just found a youtube video about this: 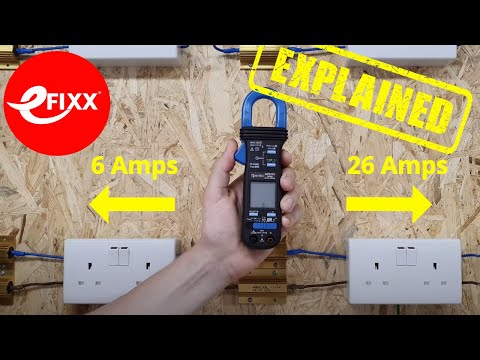 Didn’t really work the way people thought it was supposed to!

AFAIK (IANAElectrician) the power should be evenly divided in a ring circuit - it’s not like pipes, where the closest feed line has the most flow. Resistance in the wires should be minimal either direction. A higher resistance - a poor connection - is a fire waiting to happen.

They can chain from the first outlet which is directly connected to a breaker or fuse panel. However, outlets must be contained in a NEMA approved enclosure of it’s own which is rated the same as a junction box.

in each of the outlet boxes the wires should be spliced to the pigtail from the outlet and any wires down stream. The outlet should not be used to splice the wires together.

To expand on @Snipe70e’s excellent comment, my understanding — possibly flawed, I’ve done a great deal of theater electrical work but not a lot of residential/commercial — is that it’s because the tab connecting the two sides of the outlet may not have the same rating as the service wires (IIRC, the tab is typically rated 15a).

The NEC (US) and the CEC (Canada) prohibit parallel paths for all but the largest wires (typically large feeders above 200A), so ring circuits are not allowed here.

Not what the OP asked, but I’ve found telephone twisted pair ring circuits here, so the principle is known and used here.

The video suggests the current will split fairly unevenly, but he’s using 0.22Ω resistors on each gap. Not sure the difference with British wiring standards, but 14Ga typical in N America according to one site I found was 2.5Ω per 1000 feet. The way he has it set up is equivalent to a 1000’ (300m) ring.

But the principle is correct, current is proportional to resistance. (Doh! I should have known that!) As I was getting at earlier, most wiring tends to start with the nearest outlet and work its way further away. Rarely are you lucky to have a sequence of boxes that are roughly the same distance. So one leg of a ring would be a longer run to the far end of the chain, creating the imbalance implied in the video. Ignoring junction resistances (where fires usually start) the current would be split according to the distance on each leg to the circuit breaker.

I like his demonstration plugging a kettle and a toaster load into one outlet box. Unless you have a 20A circuit, in N America two big loads on the same circuit would probably pop the breaker. (Kettle or toaster is usually 1000-1200W so 8-10A)

To expand on @Snipe70e’s excellent comment, my understanding — possibly flawed, I’ve done a great deal of theater electrical work but not a lot of residential/commercial — is that it’s because the tab connecting the two sides of the outlet may not have the same rating as the service wires (IIRC, the tab is typically rated 15a).

Not so much the tab rating. If the pushin connection or the screw holding the wires to the outlet becomes loose then the load through the connection will be the load from that outlet and every outlet down stream. And if the connection fails then every outlet down stream will no longer work properly. If the wires in the junction box are properly spliced together and wired nutted properly the chances of a failure are much less than connecting through the outlet. Screws in outlets warming up and cooling down do often become loose.