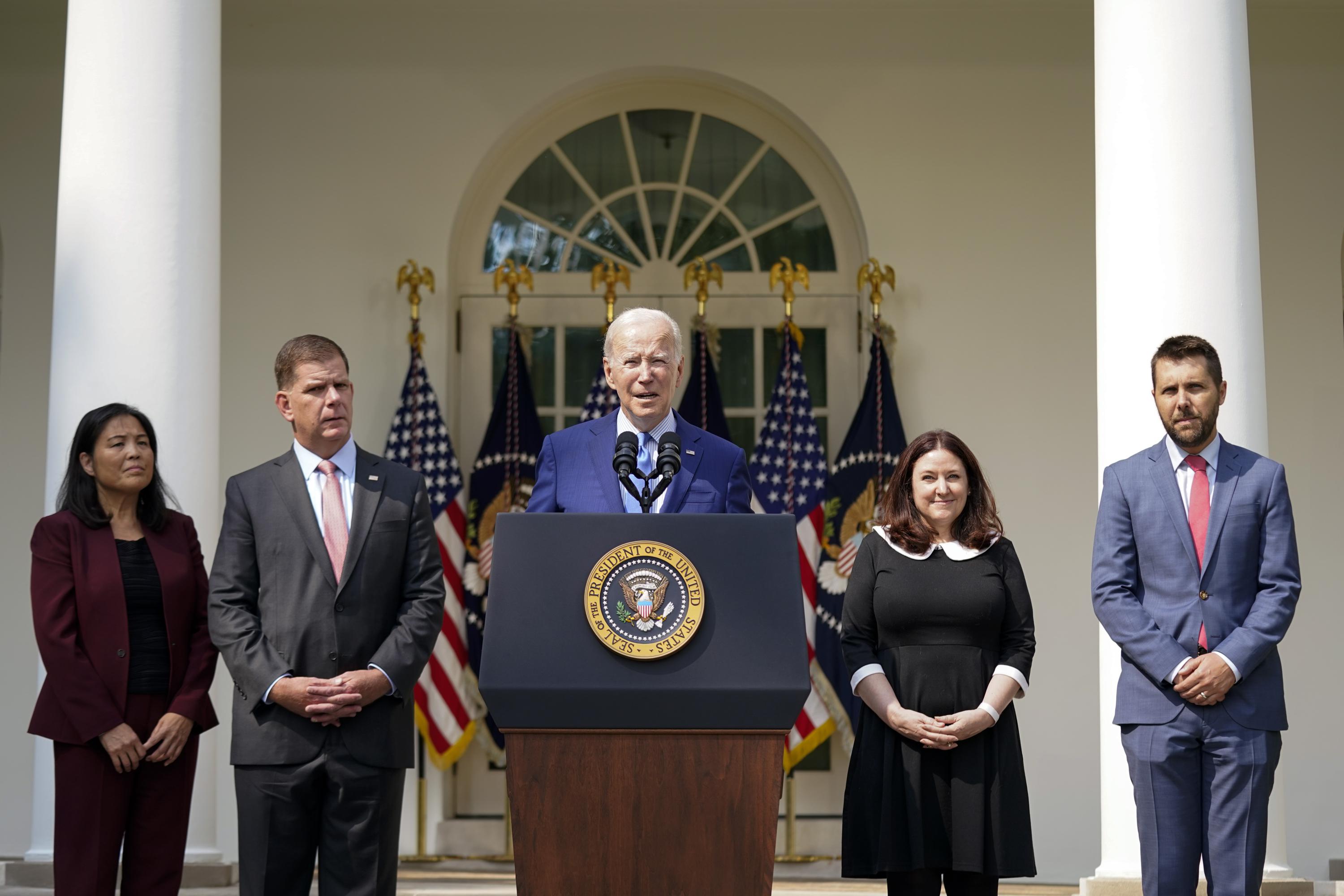 WASHINGTON (AP) — Rail companies and their workers reached a tentative agreement Thursday to avert a nationwide strike that could have shut down the nation's freight trains and devastated the economy less than two months before the midterm elections.

Biden helped avert a railway strike that would have cost the US $2 billion a DAY.

Democrats need to hammer home the point that they’re better for the economy in their campaign ads. Inflation and gas prices have gone down thanks to them, and they helped avert a railway strike that would have cost the country $2 billion a day.

While I agree with you, Dems are being blamed for everything bad that’s happened since Trump left office. That’s the nature of politics. Repubs will blame Biden for the fact there was almost a nationwide railroad strike during his watch, so he can’t win with them. The only hope is that independents will see that it could have been much worse than it was, thanks to Biden’s help.

Thanks for starting this. Averting a labor strike offers an opportunity to draw a complete contrast with Republicans. Reagan averted a labor dispute through mass firings, setting worker rights back by decades. Biden averted one through working with both sides and helping the rail workers secure sick leave.

When Republicans talk about how great they are for the American worker and how Democrats are elitists, this is the case that Democrats should talk about. This is the most unambiguous win for Democrats this year, and they should be trumpeting it to the heavens.

Definitely one for the Win column. However, the agreements are presently tentative - AIUI the union members need to still vote on the agreements, but are likely to agree. Still, there is a non-zero chance this could come back in a few weeks if the vote goes sideways. Still, I agree this is a big win.

Still a tentative agreement but much better than what the pro-corporate ram-down the GOP was proposing, penned by Senators Wicker and Burr.

They can point to the 8 percent unemployment the prior adminisration left on the table in 2020, which was brought down to about 5.5 percent in 2021, and is near record lows in 2022.

The Biden administration gets two points for avoiding the rail strike, which likely would have negatively impacted both inflation and unemployment.

That particular point wouldn’t be, which is why the Democrats wouldn’t us it in campaign ads, because Democrats aren’t idiots. I’m not sure why you bring it up, though, because it has no relevance at all to this thread.

I was responding DIRECTLY to what the OP said:

“Democrats need to hammer home the point that they’re better for the economy in their campaign ads. Inflation and gas prices have gone down thanks to them”

Inflation has NOT gone down thanks to them. How is responding to the claim in the OP irrelevant to the thread???

I heard a report that it took him All The Do-Dah Day.

What, pray tell, do you think the Biden administration and/or Democrats SHOULD be doing to “get inflation down”??

And spare us the non-specifics: “Be a leader.” “Think of America first.” “Fiscal responsibility.”

Cut taxes, of course, because that has always worked in the past. Right?

OK, I’ll play. Now, in the real world, political parties and candidates don’t mention the bad things which happened under their watch as happening because of them - for example, Gerald Ford’s 1976 ads mentioned inflation, but they didn’t remind the audience that Ford’s party has held the Presidency since 1969.

But let’s say that I’m given the assignment: “JohnT, we’re getting hammered on inflation! I need you to make a general TV ad we can give to all D candidates so they can address this issue”. Here’s what I would do:

FADE IN to a series of photographs, US Union (no Confederate) troops in the Civil War, all sepia-toned.

FADE OUT to black. FADE IN to a series of photographs, US troops in WW1, all grey-toned. Music changes to a piano softly playing Cohan’s Over There

PHOTOGRAPHS CHANGE to pictures of Americans during the Spanish Influenza epidemic:

V/O: “Again, catastrophe strikes America and America rises to the challenge… but at the cost of 290,000 American lives and almost 700,000 wounded. And, again, a year later as America once again rebuilds and recovers, inflation peaks at 19.7 percent.”

FADE OUT to black. FADE IN to pictures of the Vietnam War (1975 is best). Music changes to electric guitar playing “Fortunate Son”. Also pictures of gas lines.

FADE TO black. FADE IN to modern cell phone images of the COVID disaster. Use the absolute worst images of Trump, the ones which make even his supporters flinch. Music changes to… Ed Sheeran’s Perfect (because I hate that song and want to ruin it for as many people as possible, ok?, thanks, bye).

V/O: “And, again, a catastrophe strikes America in the Trump years, eventually killing a million Americans and 16,000,000 jobs. And, like clockwork, as America rebuilds and recovers, inflation rears its ugly head again.”

STILLS changes to VIDEO of JOE BIDEN in suit and AVIATOR GLASSES.

AS BIDEN speaks camera slowly focuses more on his face. Music changes to Cee Low Green’s Fuck You (but the clean, “Forget You”, version.)

In the summer of 2022, in response to World War COVID, the Democrat Party passed the Inflation Reduction Act, the single most comprehensive package of inflation fighting measures in American history. And you can tell that it has already worked - instead of the 23% rates which hit America after the Influenza Epidemic of 1919, instead of the 19% rate which we suffered from after winning World War Two, our Inflation Reduction Act capped the damage to 9%.

CAMERA stops zooming in, the top half of BIDEN still visible. BIDEN whips off his AVIATOR GLASSES and continues, looking straight into the CAMERA:

This is still too high though, and my Administration will continue fighting inflation on behalf of every single American.

V/O: I am Joe Biden and you’re damned right I approve this message