Cain: "I am the Koch brothers' brother from another mother!"

Cain embraces his relationship to the Koch brothers in defense of allegations of campaign wrongdoing associated with the Koch’s.

Regardless, of his politics and policy issues, this guy has charisma and knows how to use a soundbite.

Knows how to use a soundbite to make me like him even less.

He’s their Brother from another planet, IMHO.

He’s like a remora on their shark, in other words a Koch sucker.

He’s like a remora on their shark, in other words a Koch sucker.

I posted this in the Pit thread on the Republican climate change deniers thread:

One would think that this would disqualify Cain in the eyes of many and lead to less support, but this is not the past were corporations were limited on their political efforts.

Thanks to the idiotic recent decision of the supreme court, people like the Koch brothers via outfits like Americans for Prosperity have the organization and funding that in the past, if it was weak, would had stopped a less able candidate. Many critics did point out how feeble Cain’s efforts in many of the primary states are and the idea was that soon Cain was going to go down in support and resources, but they are forgetting about groups like AFP that have the organization ready, so if in the past we heard about astroturf movements, get ready for an astroturf presidential run as the oil and coal men will support a candidate that is saying what they want, and will do what they want if elected in the form of inaction regarding regulations of carbon emissions. 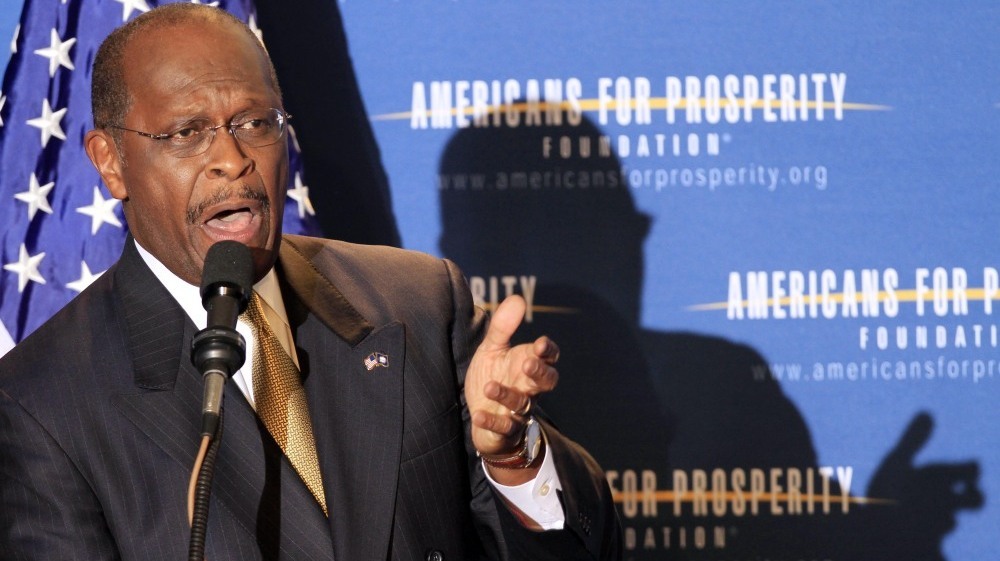 Americans for Prosperity first enlisted the Republican presidential candidate in 2005 to spearhead what it called the Prosperity Expansion Project. Herman Cain met his future campaign manager, his first press secretary and the architect of his 9-9-9...

It went over like gangbusters with his audience, but I have to ask- is this the kind of thing swing voters want to hear? ‘I am extremely tight with right-wing billionaire industrialists?’

More specifically, right-wing billionaire industrialists who have a reputation for trying to screw over everyone poorer than them for their own enrichment.

Please. Don’t you have the latest version of reality ? We say America-saving job creators now. Now, onto the matter of our ongoing kinetic operations with Eastasia…

Is this proving the power of money in our politics? Multiple sexual harassment charges come out the same week he said he had good information that China is trying to develop nukes, and he is on top of the Repub race. He should be hooted off the stage, yet he is ahead of Romney. The mind boggles.

Please. Don’t you have the latest version of reality ? We say America-saving job creators now. Now, onto the matter of our ongoing kinetic operations with Eastasia…

Please. Call them the “once and future” job creators, since for the present the best of the best are sacrificing themselves to prolong the recession, in order to guarantee the defeat of Kenyan Homo-secular Socialism 12 months from now, and ensure Liberty is restored to [DEL]Oceania[/DEL] America.

WAR IS PEACE. FREEDOM IS SLAVERY. IGNORANCE IS STRENGTH