The full text of the 29-page suit can be read here;

Much like the charges that came out at Ubisoft last year, it’s more of the same that we keep seeing in “geeky” industries run by white men - the company is being run by fratboy dudebros, and women are underpaid, passed over for promotions, and treated like sex objects or potential conquests. Some of the alleged behaviors are truly deplorable, including “cubicle crawls” where drunk employees crawl under cubicle walls to get handsy with female employees, female employees being denied promotions because they might “get pregnant and like being a mom”, or most troubling, an instance of a female employee being driven to suicide after an employee she was having a relationship with was found to be sharing nudes of her around the office and apparently tried to coerce her into some sort of kinky sex on a business trip.

I’d say it’s shocking, but the AAA game studios have become such profit-driven centers of corporate depravity in recent decades that this kind of thing almost seems like business as usual.

There was some speculation when it came out last year that long-time World of Warcraft Creative Director Alex Afrasiabi had apparently left Blizzard in June with no fanfare. I guess now we know why:

. . . Alex Afrasiabi, the former Senior Creative Director of World of Warcraft at Blizzard Entertainment, was permitted to engage in blatant sexual harassment with little to no repercussions. During a company event (an annual convention called BlizzCon) Afrasiabi would hit on female employees, telling him he wanted to marry them, attempting to kiss them, and putting his arms around them. This was in plain view of other male employees, including supervisors, who had to intervene and pull. him off female employees. Afrasiabi was so known to engage in harassment of females that his suite was nicknamed the “Cosby Suite” after alleged rapist Bill Cosby.

What will happen if California wins?

The suit says they’re asking for compensatory and punitive damages, injunctive relief, declarative relief, reinstatement/back payment/restoration of benefits etc. for wrongfully terminated employees, interest, costs, and “other relief the Court deems to be just and proper”.

Presumably, the state’s ideal solution is “Blizzard pays out a ton of money and we make sure they don’t do this anymore”.

In response to the filing, Activision Blizzard put out a weirdly MAGA-esque statement railing against, “unaccountable State bureaucrats that are driving many of the State’s best businesses out of California.” The gist of the statement is, “we didn’t do it, and even if we did, it was a long time ago.”

Ugh. I’ve been playing WoW for well over a decade, and Blizzard has always found ways to keep me engaged. But between this and the pretty glaring gameplay and story issues with the latest expansion, it does feel like things are going off the rails.

I hate to bump my own reply, but that statement by Activision Blizzard has been baffling me. I just can’t imagine any competent public relations or legal team signing off on a statement so combative, full of inaccuracies and oddly political. This it was pointed out to me that in March Activision Blizzard hired Mike Pompeo’s attack dog as their new Chief Administrative Officer. Now it’s all starting to make sense . . .

Well, I work at MSFT. These companies all drink their own kool-aid and think their sh*t don’t stink. And then Uncle Sugar puts 'em in a chokehold and chokes. It’s a painful experience for those that have breathed rarified air for so long to be called on their BS. Doubling down is their DNA, and doubling down with a MAGA attack dog is pretty much guaranteed to end in tears.

These companies should take a page from pharmaceuticals, admit regrettable actions happened, agree to a headline number that sounds really big to a rube ($25 billion fine after making a lot more profit than that), and settle without actually admitting wrongdoing or future liability. Instead, these dumb asses double down…

I just can’t imagine any competent public relations or legal team signing off on a statement so combative, full of inaccuracies and oddly political.

I got the same sense. It’s genuinely weird; I cannot remember any REAL company issuing such a statement.

I haven’t touched Blizzard games for about three years now, but I’ve spent what amounts to full years of my life in game time on all of their games in the last 30 years. The last time I enjoyed WoW was in the Legion expansion in early 2018, but it already had a lot of game systems that seemed designed by a room full of psychologists designed to trap you in habits instead of trying to make a game that’s actually fun to play. When I saw they were only doubling down on those systems in the next expansion, I quit the game entirely.

It seems like every time I hear something about Blizzard, it’s terrible. Whether it’s the Taiwan/Blitzchung incident a few years back or the Warcraft III reforged fiasco. Those pale in comparison to this. It sounds like this has been the company culture for a very long time, even when they were making games that I loved. This only makes it easier not to buy their games going forward, though.

That PR statement is baffling, and only makes them seem worse. It’s something I’d expect from a political pundit, not a PR person from a major company. Makes sense that it probably is from one.

Afrasiabi was so known to engage in harassment of females that his suite was nicknamed the “Cosby Suite” after alleged rapist Bill Cosby.

Ugh. And this guy is in WoW:

Yeah, that PR statement is appalling. The Blizzard president sent a much more nuanced email to employees that should have been the basis for their response. Hoping they clean their fuckin house.

Activision Blizzard seems to be warring with itself now over how to respond to the lawsuit. Blizzard President J. Allen Brack sent out an email to staff saying that, “the behavior detailed in the allegations is completely unacceptable.” Meanwhile, newly hired executive Fran Townsend also sent out an email to staff calling the lawsuit “meritless and irresponsible”, “distorted or untrue”, and full of “factually incorrect”, “out of context stories - some from more than a decade ago.” Townsend, by the way, was as top Bush Administration advisor on counterterrorism who defended the use of torture in interrogations.

What a shit show. And why is a video game company filling up its executive suite with these right-wing political hacks?

That statement from Fran Townsend only makes me more likely to believe that the talk of hostile HR and retaliation against people who tried to bring issues to light are true. I wonder if things have really improved as much as they suggest if that’s indicative of their current corporate culture. It’s like they’re saying “We encourage people to Speak Up, but everyone speaking now is either lying or misrepresenting the facts.”

Over a thousand Activision Blizzard employees have signed onto a statement condemning the company’s official response to the lawsuit, as well as Fran Townsend’s internal statement.

This is officially a Category 5 disaster for the company. Dozens of former employees have taken to social media to relate their own experiences of sexual harassment and abuse. Ironically, Activision Blizzard’s combative, dismissive response may lead to even more employees cooperating with the California Department of Fair Employment and Housing on the lawsuit.

I don’t think I’ve seen a company flounder so badly in the face of such allegations. I’d like to think that this could be a moment for Blizzard to make the institutional changes necessary to stamp out “bro culture,” but I think its more likely that we get some paeans to equality and then right back to focusing on squeezing every dime out of players that they can.

James Stephanie Sterling certainly isn’t pulling any punches in their video on the matter. 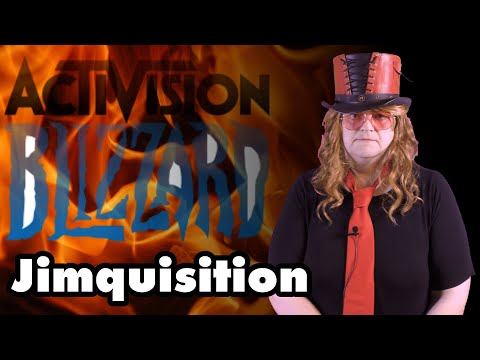 There’s a pervasive myth that corporations don’t make blunders because they have plenty of money and resources to do things correctly. Next time I hear someone make that argument I’m going to point to Activision Blizzard’s response to this suit as a good example of a large corporation blundering stupidly. I read the suit out of professional interest (I work in HR), and this is one of the most egregious allegations of behavior creating a hostile work environment I’ve seen. Their spokesperson mentions updating their code of conduct, creating an employee relations team to investigate issues, and anti-harassment training, but none of those things really matter if management isn’t committed to changing the bro-culture there.

I stoppled playing World of Warcraft in January because I was bored with it. I was toying around with the idea of going back but in light of this I won’t.

At the BlizzCon 2013, Blizzard employees created a “Cosby Suite” stocked with alcohol and posed with a poster of Bill Cosby. According to them, it was in reference to a conference room back at the office that looked like a Cosby sweater, but the chat logs about the suite are generally sexual in nature.

Booze, sexual remarks, and a giant portrait of Cosby are all at the center of Activision lawsuit

Yeah, that picture looks absolutely damning. As you note, there is some contention over whether the “Cosby Suite” was in reference to Cosby’s sexual assaults – the rumors about his conduct had been around for decades, but did not enter public conversation until 2014 when Hannibal Buress’ routine went viral.

But it doesn’t really matter. What matters are the dozens of first-hand accounts of sexual harassment and discrimination that former Blizzard employees have come forward with over the past week. Every one of the men in that photo were in positions of influence who did or should have known about the pervasive sexual misconduct at the company (or were abusers themselves, in the case of Alex Afrasiabi). They are rightfully being called out for at best abetting a systemically hostile workplace for women.

a statement so combative, full of inaccuracies and oddly political.

My take on that statement is that it’s intended for shareholder, to reassure them that right or wrong, ATVI will fight very hard to protect the only thing that matters: shareholder value.

It’s also public bluster to stake out a negotiating position to settle this to the company’s greatest advantage.

If that was their intention it backfired spectacularly. The stock is down about 8% from what it was before the lawsuit become public. Dozens of former employees have come forward with stories of sexual misconduct, specifically citing Blizzard’s official statement and the Fran Townsend statement for doing so. These all add to the state’s case. The workforce is in open revolt and organizing around demands in a way they haven’t before. According to some insiders, almost no work is getting done right now.

And there’s an established playbook for this – express concern about the allegations, stress your commitment to diversity and inclusion, don’t admit any fault. The shareholders’ interest lies in getting this settled quickly and under the radar with a cash payout (that will be a fraction of the company’s revenues) that will remove any ongoing liability. What the company ended up doing is causing serious reputational harm, driving employees toward greater organization (potentially unionization), and making it more likely that California will push for big structural changes and ongoing monitoring.

They’re clearly backtracking now on the initial statements, which Activision CEO Bobby Kotick described as “tone deaf.” I assume they’ve finally brought in a competent crisis communications and legal team who told them to shut the fuck up and say exactly what they’re told.