Can cavities Be Reversed?

Can cavities be reversed using products to rebuild enamel that contain Nova Min? Can it repair fractures and chipped teeth?

demineralization yes but cavity(hole) no

demineralization yes but cavity(hole) no 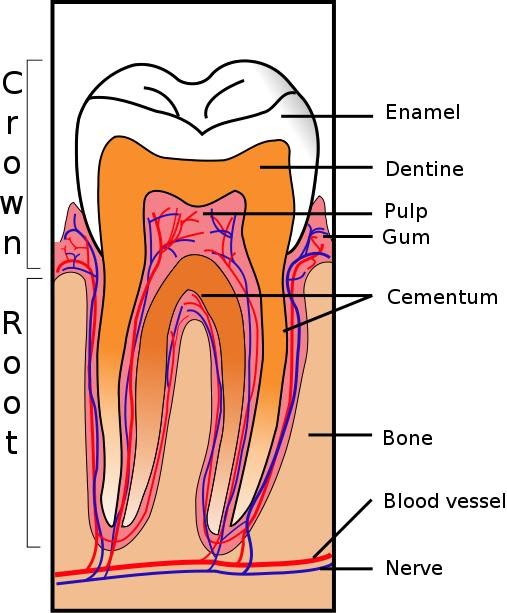 In the last post, I discussed the research of Drs. Edward and May Mellanby on the nutritional factors affecting tooth formation. Dr. Mellan...

sorry I call a hole a cavity, if isn’t a hole yet it is decay.

No way a hole is repaired by a diet rich in vit. A,D and K. I’ve been doing dentistry for almost 28 years and no way that diet is the answer. Some demineralizations can be reversed but it is the minerals not vitamins that do it.

limiting sugar slows progression on the decay by not giving the bacteria a food source but won’t reverse the process.

A 1932 article. Simply put, if your only cite is an article from before you were born, you need to assume that it is wrong and hasn’t been replicated.

Did you actually read that sinkhole of imbecility to see what was behind that claim?

Dr. Mellanby first began publishing studies showing the reversal of cavities in humans using diet in 1924. Why has such a major medical finding, published in high-impact peer-reviewed journals, faded into obscurity?

Why? Why, indeed? What possible reason could there be?

Can cavities be reversed using products to rebuild enamel that contain Nova Min? Can it repair fractures and chipped teeth?

Just so there’s no confusion as to the direct answer to this question: No.

No, however some people claim that a diet high in certain vitamins (A, D, K2) can help rebuild dentin which is the layer between pulp and enamel.

Novamin can help remineralize teeth but can’t fill in holes.

I’m obviously not a dentist.

A 1932 article. Simply put, if your only cite is an article from before you were born, you need to assume that it is wrong and hasn’t been replicated.
Whole quackery source, you mean.

Did you actually read that sinkhole of imbecility to see what was behind that claim?

Why? Why, indeed? What possible reason could there be?

pushes halves of QtM’s head back together

10 seconds of Google backs up everything he just said. As does your own link, which is quite clearly an article from 1932.

Price spent 25 years of his career performing research on pulpless and endodontically-treated teeth, which supported the theory of focal infection, which held that systemic conditions, including complexion, intestinal disorders, and anemia could be explained by infections in the mouth. This theory held that infected teeth should be treated by dental extraction rather than root canals, to limit the risk of more general illness. His research, based on case reports and animal studies performed on rabbits, claimed to show dramatic improvements after the extraction of teeth with non-vital pulps. Price’s research fit into a wider body of testimonials in the dental literature of the 1920s, which contributed to the widespread acceptance of the practice of extracting, rather than endodontically treating, infected teeth.[13] Despite contentions in a 1927 review of Price’s work of “faulty bacterial technique” in Price’s 1925 publication Dental Infections and related Degenerative Diseases,[14] Price’s publication Dental Infections, Oral and Systemic was used as a reference in textbooks and diagnosis guides published in the mid-1930s.[15][16]

By the 1930s, the theory of focal infection began to be reexamined, and new research shed doubt on the results of previous studies. A 1935 Journal of the Canadian Dental Association article called Price radical, while citing his comment in Dental Infections, Oral and Systemic of “continually seeing patients suffering more from the inconvenience and difficulties of mastication and nourishment than they did from the lesions from which their physician or dentist had sought to give them relief” as a good reason for the use of tooth extraction to be minimized.[17] One researcher in 1940 noted “practically every investigation dealing with the pulpless teeth made prior to 1936 is invalid in the light of recent studies” and that the research of Price and others suffered from technical limitations and questionable interpretations of results.[18]

Three years after Price died in Santa Monica, California, a special review issue of the Journal of the American Dental Association confirmed the shift of standard of care from extraction back to endodontical dentistry.[19] Compared to modern research, Price’s studies lacked proper control groups, used excessive doses of bacteria, and had bacterial contamination during teeth extraction, leading to experimental biases.[13]

Beginning in 1894, Price started to consider diet as the primary factor causing tooth decay. In 1925 he was attracted to calcium metabolism when he became an active student of nutrition.[8][20] In the early 1930s, Price’s research suggested vitamin B and mineral salts were important dietary components to prevent caries.[21]

In 1939, Price published Nutrition and Physical Degeneration,[7] a book that details a series of ethnographic nutritional studies he performed across diverse cultures, including the Lötschental in Switzerland, Native Americans, Polynesians, Pygmies, and Aborigines, among many others.[22] The research materials include some 15,000 photographs, 4,000 slides, and many filmstrips.[8]

In the book, Price claimed that various diseases endemic to Western cultures of the 1920s and 1930s – from dental caries to tuberculosis – were rarely present in non-Western cultures. He argued that as non-Western groups abandoned indigenous diets and adopted Western patterns of living, they showed increases in typical Western diseases. He concluded that Western methods of commercially preparing and storing foods stripped away vitamins and minerals necessary to prevent these diseases.[23]

The 1939 foreword to the book, written by physical anthropologist Earnest A. Hooton, lauded Price’s work for confirming previous research that dental caries were less prevalent in “savages” and attempting to establish the etiology for this difference. In 1940, a review in the Canadian Medical Association Journal called the book “a masterpiece of research”, comparing Price’s impact on nutrition to that of Ivan Pavlov in digestion. In 1950, a review in the journal The Laryngoscope said that "Dr. Price might well be called “The Charles Darwin of Nutrition” while describing Price’s documentation of his global travel and research in a book.[24] Other reviews were less sympathetic, with the Scientific Monthly noting some of his conclusions went “much farther than the observations warrant,” criticizing Price’s controversial conclusions about morality as “not justified by the evidence presented”, and downplaying the significance of his dietary findings.[23] Likewise, a review in the Journal of the American Medical Association disagreed with the significance of this nutritional research, noting Price was “observant but not wholly unbiased”, and that his approach was “evangelistic rather than scientific.”[25]
A 1981 editorial by William T. Jarvis published in Nutrition Today was more critical, identifying Price’s work as a classic example of the “myth of the healthy savage,” which holds that individuals who live in more technologically primitive conditions lead healthier lives than those who live in more modern societies. **The review noted that Price’s work was limited by a lack of quantitative analysis of the nutrition of the diets studied, and said he overlooked alternative explanations for his observations, such as malnutrition in primitive societies and overindulgence in the Western diet, rather than the diet itself, as a cause for poorer health. **The review makes the assertion that Price had a preconceived positive notion about the health of primitive people, which led to data of questionable value and conclusions that ignored important problems known to afflict their societies, such as periodontal disease.[26]](http://en.wikipedia.org/wiki/Weston_Price)

I have no idea what your point is.

Everything you posted is woo or no longer valid science.

Your cite doesn’t even support your claim. It says further decay may (under certain circumstances) be delayed or arrested - not that it can be reversed.

Everything you posted is woo or no longer valid science.

I cited a paper by Mellanby and Pattison along with a post by Stephan Guyenet. What does the Weston A. Price Wikipedia entry have to do with anything?

I cited a paper by Mellanby and Pattison

It’s rather clear you don’t realize most medical knowledge has been significantly updated and, in some cases, supplanted since then.

ETA: And, as Mangetout points out, the article doesn’t even say what you say it does.

I cited a paper by Mellanby and Pattison along with a post by Stephan Guyenet. What does the Weston A. Price Wikipedia entry have to do with anything?

Guyenet is a neurobiologist with no qualifications in dentistry. He is exclusively relying on other people’s research in that post - including Price:

Did you not read any of this stuff before you linked to it?

This is why I tend to avoid posting much in GQ these days. Too many outlandish claims posted as fact and even defended as such when shown to be erroneous.

Thanks of those of you still willing to fight “the good fight”. Or as Tolkien called it, “the long defeat”.

It’s not often that I find myself speechless, but Surreal succeeded.

All I can say is thanks to those who jumped in. And Surreal: I am proud to be the target of your ire on this subject.

I do remember hitting on a blog post when I was doing stumbleupon that claimed that she remineralized her teeth by making some sort of paste out of calcium pills and prescription level fluoride mouthwash, and using it in a biteguard for an hour a day. No idea if she was blowing it out her ass or actually managed it. <shrug> I tend to take health blog posts with a large grain of salt/salt substitute.

Anecdotally, mrAru’s stepfather is from Ajo AZ, which apparently has a very high level of natural fluoride in the water, and purportedly his reason for no cavities was not his diet, but the level of fluoride in the water and locally grown veggies consumed while growing up - as it is anecdotal, I will not swear to its accuracy. It does however seem to have some validity to me - they had to figure out the fluoride/enamel thing somehow.