Can the GOP avoid nominating Trump in 2024?

A situation where he doesn’t run, but anoints some other candidate, who then gets the nomination AND a lot of reflected Trump glory, and is in a position to potentially be more damaging to the system than Trump was.

Someone that has more that a room temperature IQ and ‘fills’ Trumps shoes would be very dangerous indeed.

The problem, of course with the Trump as kingmaker scenario is that he’s demonstrated no desire to assist others in realizing their ambitions unless they coincide with his aim which has always been achieving the Top Dog position. With him, literally all associations are transactional. He will never help anyone else to the Top Dog role. That’s anathema to him.

Trump choosing not to run, but playing kingmaker with someone more competent than himself. A situation where he doesn’t run, but anoints some other candidate, who then gets the nomination AND a lot of reflected Trump glory

He will never help anyone else to the Top Dog role. That’s anathema to him.

Exactly. He might even sort of let someone run with that role for a while, but soon enough he’d get spotlight envy and undermine them.

Well, I didn’t say it was likely, just the worst scenario I could think of.

I don’t see it. One side wouldn’t need it, one wouldn’t believe it, and few of the remaining would be interested in it.

I’m of two minds concerning a Trump biopic. As others have noted, MAGAt’s would perceive the faithful depiction of actual events as nothing but a ‘political hatchet job’

I understand what you are both saying, but let me ask you this- do you know any Trump supporters personally? They are not as universal as they once were where I live but they are pretty common.

I think your idea is exactly the most realistic response in all respects - - the first time it is viewed. A bunch of rejection and justification by hard core supporters of his. But perhaps one scene of Biden behind the scenes trying to come up with a way to reach voters without putting their health at risk could make a subtle difference in approach. (It could also show Joe as thoughtful and competent, perhaps some advisors could tell him he MUST risk his voter’s health and he could resist on principle.)

But as long as Trump is shown accurately, they will love the parts where “libs” get all excited when he says something stupid and they all think he has hurt himself-- then FOX News bails him out putting an unintended but effective spin on the matter. Give them something to identify with. No hatchet job (intentionally), just accurate truth.

So then a month later it is on in the background, or a cinema releases it. In any case if it is seen again after time has passed - - - some Republicans will be more open to slight criticisms. MAGAs will not, but some will- and all of them (and us) and everyone will for the first time agree upon what happened in 2019 and 2020 (up to January 6th 2021).

Then during the 2022 election cycle it may show up quite a bit again. (I am sure George Soros and the West Coast liberal, Jewish, Hollywood Cartel can arrange that!) But by then it will be seen as a documentary by some, perhaps many. Trump may also have had some additional legal chickens come home to roost by then.

I am just not very good at explaining what I believe could happen. I know many of these folks, and one in particular is kind of a barometer of Trump thought. She truly believes Biden is is suffering from full dementia. She believes Trump is a good, Christian man who must sometimes lie (hey- they all do it, on both sides!) because it is in service of a greater good. But she can be persuaded of things from watching a Hallmark movie-- news has no affect upon her at all, it is easy for her dismiss it as fake. But seeing people perform actions has a strength that is kind of magical. She probably believes gangs in 1950’s New York danced to resolve their differences and that Natalie Wood is Puerto Rican.

I believe a biopic of Trump that is made and released soon would have minor affect upon political reality in the short term. But I also believe if it can be shown a few times before then, it would become “the official version” of real life events by almost everyone before 2024. Hell, there are people in this world who believe Ralph Macchio can beat up William Zabka!

Is there any consensus anywhere that if Trump gets the nomination in ‘24 he could actually get re-elected?

Or is the fear of Trumps nomination in ‘24 because then the Republicans won’t be able to take back the White House?

This is a legitimate question as I think it’s silly to be concerned about 2024 in 2021 when Trump got his ass handed to him and the Guy that did it hasn’t even been in there for one year yet.

The assumption in the OP is “a Trump candidacy in 2024 would be not just a sure loser in the POTUS race but possibly disastrous downticket as well.”

IOW, Republicans recognize he’s toxic to their chances and would prefer he not run.

Is there any consensus anywhere that if Trump gets the nomination in ‘24 he could actually get re-elected?

Depends on the effectiveness of GQP efforts to game the system.

IOW, Republicans recognize he’s toxic to their chances and would prefer he not run.

On the other hand, consider that only about 40K votes across a handful of states in 2020 going the other way or those people staying home and he would have won an electoral victory.

But I still say it’s 2 years too early to worry about Trump.

It’s just an assumption for the sake of argument, not a prediction.

But I still say it’s 2 years too early to worry about Trump. The most likely scenario in 2025 is catastrophic: Trump back in the White House and Republicans in charge of the House and Senate.

It is increasingly evident that the nightmare prospect of American politics — unified Republican control of the federal government in the hands of a reelected, empowered Donald Trump in 2025 — is also the likely outcome.
…

This is a national, not just a Democratic, emergency. Trump has strengthened his identification with the seditious forces he unleashed on Jan. 6. He has embraced ever more absurd and malicious conspiracy theories. He has shown even less stability, humanity, responsibility and restraint. And his support among Republicans has grown. Trump and his strongest supporters are in a feedback loop of radicalization.

If Trump returns to the presidency, many of the past constraints on his power would be purposely loosed. Many of the professionals and patriots who opposed him in his final days would have been weeded out long before. There is no reason Trump would not try to solidify personal power over military and federal law enforcement units to employ as a bully’s club in times of civil disorder. There is no reason he would refrain from using federal resources to harass political opponents, undermine freedom of the press and change the outcome of elections. These are previously stated goals.
…

I believe this is correct.

I want Democrats in both houses of Congress to get behind Biden and unite to make sure he has a successful Presidency (or as successful as possible) with some real accomplishments to show. THEN they can nitpick intra-party ideological and policy differences. The dissenters are arguing over carpets and wallpaper while the Republicans are setting fire to the whole structure.

More on the disaster that a 2024 trump win would be. 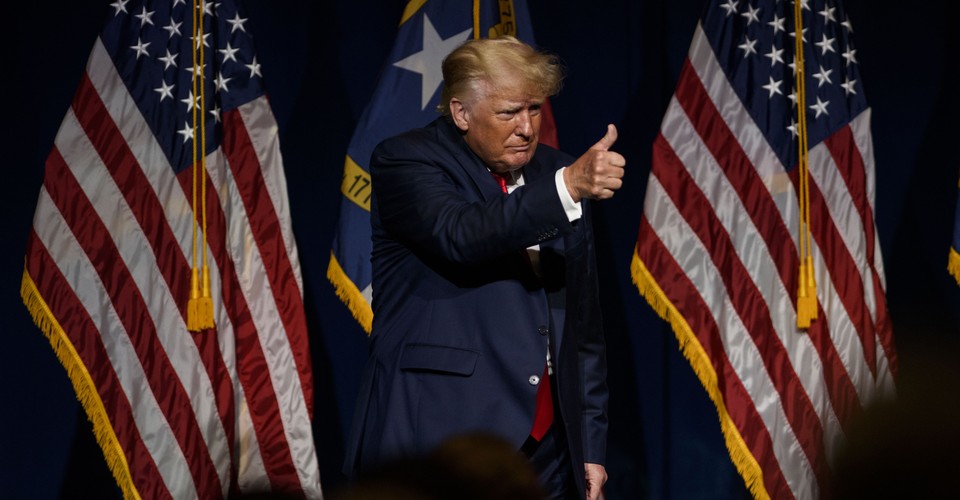 America Is Not Ready for Trump’s Second Term

And he could win, fair and square.

…
Some of the smartest arguments for not panicking about the future Trump threat have come from Ross Douthat, a conservative Trump critic, who argues that although Trump may indeed be an aspiring dictator, that matters little if he can’t execute. “Again and again his most alarmist critics have accurately analyzed his ruthless amorality but then overestimated his capacity to impose his will on subordinates and allies, let alone the country as a whole,” Douthat wrote recently.

But Douthat underestimates the changed institutional landscape that would greet Trump upon reentering office on January 20, 2025. Trump would likely have unified Republican control of the House and Senate. He would have a conservative majority on the Supreme Court—and the real possibility of naming Justice Stephen Breyer’s replacement. Trump did have a Republican Congress for the first two years of his term, but he didn’t know how to use it, and both chambers were led by Republicans who were deeply skeptical of Trump and his goals. Then-Speaker Paul Ryan didn’t do much to stop Trump, but he slowed him down, as did McConnell.

Now Ryan is gone, and McConnell has demonstrated his flexibility. The internal Republican resistance to Trump has been winnowed away, leaving little more than Mitt Romney in the Senate and a handful of representatives in the House.
…

More pliable legislative and judicial branches would help Trump, but he would also have better control of the executive branch. He assembled his first administration from misfit toys and castoffs, staffers who would never have gotten such jobs in another presidency because they were too inexperienced, too incompetent, too abrasive, or too extreme. On his return, he’d do better. Those staffers are now seasoned and more able, and fewer veteran Republicans would remove themselves from consideration next time.
…