Evil movie and television clowns abound, but are there any good guy/heroic clowns out there in movie/tv land?

In Fellini’sLa Strada, Il Matto (The Fool) is a sympathetic character. And Gelsomina herself is a clown.

Not in TV or Movieland, but Siegel and Schuster (the guys behind Superman) created another hero – Funntman – in 1948. His look was based in Danny Kaye. But he never caught on:

Koko the Clownwas a star of early cartoons.

Depending on how you feel about him, Pocket (from Christopher Moore’s Fool, The Serpent of Venice and the just-released Shakespeare for Squirrels is a heropic clown. He’s TThe Fool from Shakespeare’s King Lear.

I suspect Moore felt he had to write a book about him after someone gave him a Fool’s cap and bells, which he wore in publicity photos. 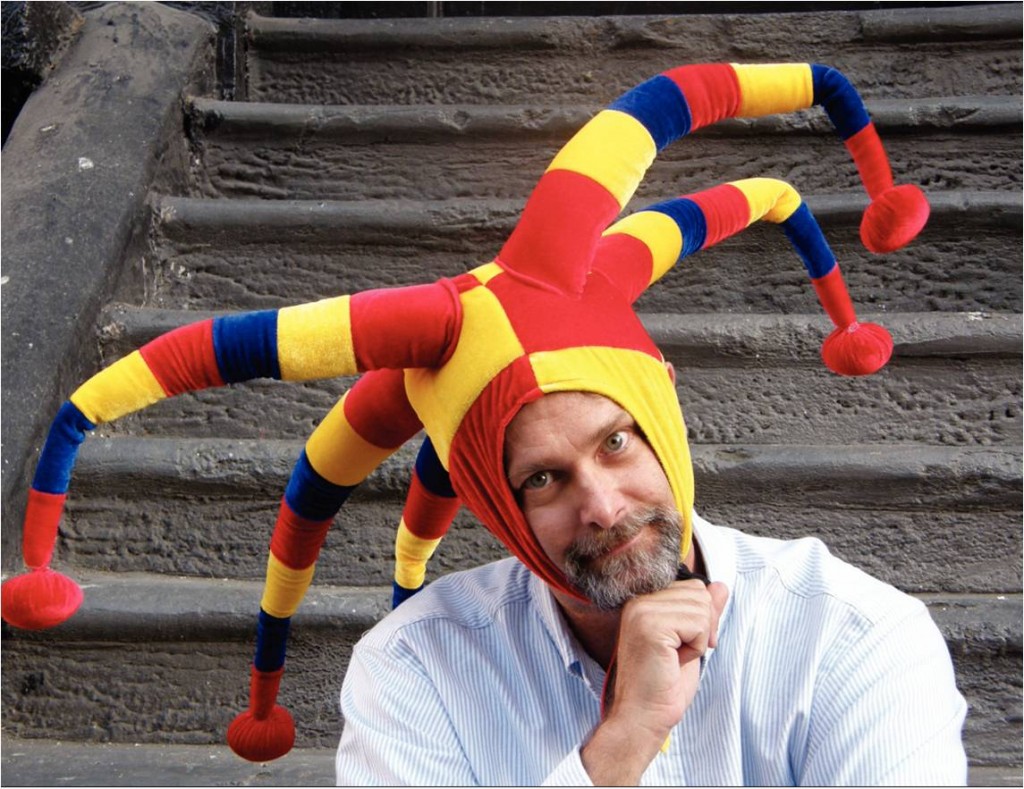 My Cats Never Learned to Read: An Interview with Christopher Moore

Christopher Moore stops by and talks writing, marketing, and the importance of research.

Still no movies or TV shows, though. Most of the clowns in those are either kinda patheetic, or evil, or at best kinda nasty.

Do commercials count? Ronald McDonald is supposed to be a good guy.

There’s always the Fleischer Brothers cartoon character Koko the Clown (originally brother Dave in a clown suit, rotoscoped). He starred is a lot of silent cartoons before being relegated to Background Character in Betty Boop cartoons. But he was in movies (if you count cartoon shorts as movies) and he was a “hero”

Elya Baskin as Anatoly Cherkasov (a circus clown who chickened out of defecting) was a sympathetic character in Moscow on the Hudson.

Red Skelton’s Freddie the Freeloader was one of his most popular characters on his TV show.

Clarabell the Clown on Howdy Doody was mischievous but not evil.

Clopin in the various adaptations of The Hunchback of Notre Dame is often depicted as a fool/jester and leads efforts to rescue Esmeralda.

Sorry, Colibri – your entry hadn’t surfaced on my screen when I wrote about Koko.

On The Golden Girls, a season 5 episode, “Love Under the Big Top,” depicted Dorothy being in love with a successful lawyer (played by Dick Van Dyke) who was leaving law in order to follow his lifelong dream of being a clown.

Van Dyke’s character was a bit obsessive about his interest in being a clown, but he was a sympathic character and a good person.

(My wife has been binge-watching Golden Girls on the Hallmark Channel recently, and I happened to see this episode recently.)

Bill Murray is dressed as a clown in the film Quick Change. Even though he’s technically a bad guy (he robs a bank at the beginning of the movie), he is a sympathetic character.

Do commercials count? Ronald McDonald is supposed to be a good guy.

Is that the clown who associates with children when the parents aren’t around, offering them cookies and soda pop?

Clopin in the various adaptations of The Hunchback of Notre Dame is often depicted as a fool/jester and leads efforts to rescue Esmeralda.

If we’re counting jesters, Wamba the jester does a number of heroic deeds in “Ivanhoe” (which has been adapted many times).

If we’re counting jesters, Wamba the jester does a number of heroic deeds in “Ivanhoe” (which has been adapted many times).

Of course, there is also King Lear’s Fool, who is the most loyal and probably the wisest character in the play, and who appears in movie and TV adaptations. (There are of course many other Shakespearean fools, who are usually sympathetic, but not all of them are literal jesters or clowns.)