For those small n umber of cricket buffs who frequent SDMB. :):eek:

The heavyweight clash in world cricket at the moment is underway in the subcontinent.

The tour of India is a difficult gig with most of the cards heavily favouring the home side.
Firstly the Indians are a crack batting outfit and a pretty handy bowling outfit, especially in their home conditions.

Recently England had the horror result of scoring over 400 in their 1st innings only to lose because of the Indian batsmen (in particular Koli) capacity to occupy the crease.

The Australian team is not IMHO particularly strong, batting too relying on Smith & Warner and a couple of potentially handy kids on their first tour and having the Marsh brothers as an avoidable burden.
The bowling features the pace pair of Starc & Heazlehurst who’d be top of world rankings but playing in conditions not suited to them. The spinners are Lyon haven’t been successful in these conditions and the yet-to-establish his credentials O’Keefe, both of whom could be described as competent journeymen. Generally Australian spinners prefer wickets that bounce (i.e. home pitches) over wickets that spin as is ubiquitous in India.

Australia hasn’t won in India since 2004. Haven’t looked that likely either. On current trends, Australia wins a series in India once in a generation.

All but the most optimistic were figuring anything more than an outside chance of one win in the four Test series and only those on uppers thought that’d be enough to win the series.

Ladbrooks were offering India as $1.14 favourites to win series and were suggesting that at $1.62 for India to win the 1st Test was genuine value with Australia @ $5.

Australia win by 333 runs just after tea on the 3rd day.

Even the team’s grandmothers didn’t think this was likely.
The team didn’t bat particularly well, not lasting 100 overs in either innings with the exception of Smith’s outstanding knock in the 2nd (though India gave him four chances) and Starc’s belligerence in the 1st.
Their fielding was of high quality, a couple of good catches and a smart stumping set the 1st innings and the game up.
The bowling knocked over the best batting line-up in the world on their home pitches in 40 overs, twice.

The Indian bowling was up to standard in conditions that should have favoured them, their fielding down to their usual sub-standard. Their batsmen put in two performances that would have been ranked as substandard in a ODI or T20.

India can still win from here, and indeed are probably still favourites to do so. But we are playing a different game now.

So much for O’Keefe just being a ‘white ball specialist’.

His bowling average before the match was about 32, now it is about 20.

I am guessing the next 4 pitches will be roads.

Australia’s bowling was significantly better than England’s earlier in the season, and it told.

We’ll see what the next pitch is like. The problem with making it a flat road for the batsmen is Steve Smith, and the fact that Australia are now ahead.

I thought this was an outstanding result for a few reasons.

For the series, it really opens things up. England’s bowling unit were never offered a pitch that turned quite as much as this, but wouldn’t have had the weapons to exploit it, even if they did. This should ensure that the pitches don’t turn square from the off for the rest of the series, as India now know that they can bowled out by a decent spinning unit on the opposition. Of course, this also means Australia, especially in the first innings, should find it a bit easier to bat and set a score. This (having a bowling attack that was as good on turning tracks as India, thus blunting the pitches and allowing us to score some runs) is how England won in 2012, when we had Swann and Monty on the pitch.

Speaking of which, massively pleased that Monty is involved at present with the Australian team as bowling consultant. Of course, he can’t take the credit - the players on the field get that - but he has had a number of very rocky years personally and I’m delighted that he’s involved in cricket at the top level and involved in some success too.

Smith’s century, given the limited number of runs in the game, was an outstanding effort (the dropped catches probably take it off the very top shelf but nevertheless top work). Handscomb looks like he’s got the goods too and Renshaw doesn’t look half bad either. This is rounding into a decent batting unit.

It’s a huge marker laid down in this series. From an Englishman’s point of view, it’s also a huge marker laid down for The Ashes. We were never anywhere near getting to this sort of situation when we were out there before Christmas. We’ve also just hosted Pakistan and drawn at home 2-2. Australia have just hosted Pakistan and won 3-0. OK, conditions are obviously different in Oz than in England but common opponents and how they have been dealt with suggests England have a lot of ground to make up before November.

Indeed. 6 months ago I was feeling quite positive about England’s chances in the next Ashes. The pendulum has certainly swung in the other direction now.

Second Test, and it looks like it’s going the same way as the first. Australia bowled India out for 189, and are 40/0 at the close. Nathan Lyon got 8/50. It’s a long way back for India in this series now.

If you like “brighter cricket”, then today probably was the pits.
90 overs, 197 runs, 6 wickets. 120 scoring shots off 540 deliveries.
If you are a Test cricket traditionalist it was engrossing

The surface is difficult to bat on so it’s hard to see the game lasting 5 days, so it was a show of grit and resilience to bat the day.
If the Australian tail can add another 50 then India are just one bad session with bat or ball from losing the series. If India knock over the tail and get to tea tomorrow on about par with no more than one wicket down they might be favoured to win. Chasing more than 120 in the 4th innings will be difficult.

Good day for India, knocking the tail over for just another 50 runs and batting well through the day. They are currently 126 runs ahead and only 4 down, in the midst of a nearly 100 run partnership.

Difficult to call from here! I’d say India has the better hand - as penultima thule said above, chasing over 120 could be tough, and India will want to get that lead past 200.

Presumably, had England played on such a pitch their batting would have been shown up a lot more than it actually was.

Presumably, had England played on such a pitch their batting would have been shown up a lot more than it actually was.

Watching the WI match yesterday it is clear that the battle against spin is going to be a long one for England even though they did (relatively) canter home.

As for the Aus v India test…thrilling stuff. End of the third day and India have 120+ lead and six wickets in hand on a pitch that may have flattened out but still seems erratic.
Classic test match cricket, a real battle of bat and ball.

Australia need 188 to win the series, and it’d be more satisfying result than the 1st Test.

India nearly took it out of reach but the Aust quicks dragged it back into the balance.
I think it’s a bridge too far for Aust but we have had less than average contributions from Warner, Smith, Handscombe and (M) Marsh and two 50s from them might get them home.

Expect the umpires will be constantly under the kosh.

I think bugger probably would about sum it up for me too, if that had been England.

Australia were probably one good session with the ball away from putting India away here and couldn’t quite get it done in the 3rd innings. Pujara is a damn good bat, in all fairness. Not fancying chasing 120 was prophetic, it turned out.

God only knows what will happen in the next Test. Unsurprising to see the aggro creep in too.

Good toss to win and despite almost blowing a sound start in the morning session a good consolidation in the middle session and then batting through out the last without conceding a wicket gives the days honours to the visitors.

The much speculated terrors of the pitch have not yet eventuated, but time will tell.
Australia needs to bank 450 here and they have lost one more wicket than they should have to achieve that. If the bowlers run through them in the morning for under 350 it will be advantage India

Australia gets the minimum 450 they need with Smith in superb touch and a watchful innings from Maxwell that even his Mum would have doubted he could play. Then India begin to steadily knock over the runs needed without losing wickets.

I’d give the days honours to India.

Can I just say this thread is the sole way I have been following this series, so I do appreciate the updates. I know it can feel like posting to no-one sometimes! Not the case here.

India will presumably be looking to win from here in a similar manner to how they knocked over England - score 600+ then take some cheap Aussie wickets on day 4/5 with a deteriorating pitch. I suspect the Aussie batting may put up more resistance than ours did, though. So much depends on the pitch. All three results still very possible.

Has the feel of a draw, although India still have a bit of batting to do. I don’t think they’re likely to get enough to put Australia under pressure though.

It’s take India til drinks in the tea session to get parity.

To get a result from here requires a batting collapse from one side. Even if Australia close the Indian innings out quickly and are batting by lunch with a 20-50 lead they’ll need three sessions and 240 runs to give a viable target & time.

In a first Class game there’d be a declaration considered immediately after India get a lead. From that position only Australia could lose. I don’t think that is likely.

BTW, Kohli’s ego must be copping a shellacking. 5 innings for just 46 runs

Can I just say this thread is the sole way I have been following this series.

Best way to follow on web is via CricInfo 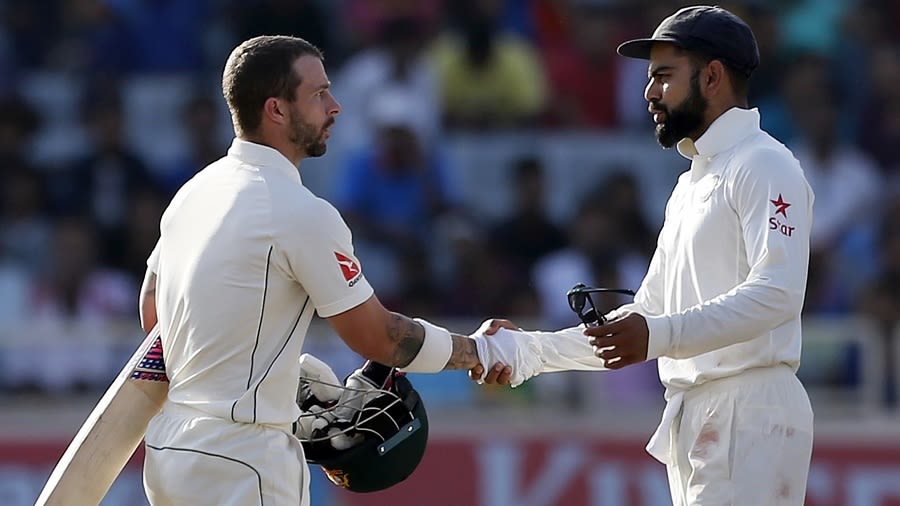 India already have enough to make Australia start to feel uncomfortable. Coming up to tea, and they are 478/6, 27 runs in the lead without losing a wicket today. Still going to be tough to force a win for India, but it’s hard to see a way for Australia to win in the time left.

Pujara’s on 183*. He did really well against England at the start of the series against us last year, but fell away towards the end. He’s a class player though, so he was always going to come back.

That’s why they call this sort of cricket Test cricket.
Pujara faced 521 deliveries, O’Keefe bowled 77 overs.
India faced 210 overs, approaching what they faced in the previous four innings combined.
Pujara will win most of the plaudits but Saha was just as critical in the partnership.

The sort of result oft expected by visiting teams when the notionally impregnable 400 run first innings doesn’t seem to be enough.

Australia now need to bat most of the 5th day to save the game, and that might not be enough.