Dave’s commitment to his fans is incredible. The guy trips and falls at least 12 feet and breaks his leg.

His main concern is disappointing his fans. The Foo Fighters had only played three songs in their set.

He convinces a doctor to come on the stage and hold his leg in place. :eek: Otherwise it could dislocate and become a compound fracture.

Dave and the Foo Fighters continued playing for another two hours. I have to admire his dedication. He took a heck of a risk with his health.

Meanwhile the doctors wife and a nurse had gone to the hospital for plaster and supplies for a cast.

Well, Dave eventually returned to Sweden. He was interviewed and asked about the accident. They had film of his fall. Then, they surprised him by bringing out the doctor that saved his leg.

The doctor gave his side of this crazy story. Turns out he’s a big Foo Fighters fan. 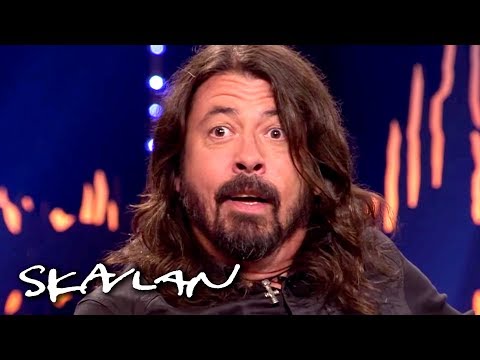 No wonder there are no Foos around any more.

btw Dave was incredibly lucky it wasn’t a compound fracture. That can tear veins and arteries. Requiring emergency surgery to restore the blood supply and save the leg.

Somehow I don’t think a US doctor would risk his license by helping a musician avoid the ER and continue a 2 hour concert.

But, this was in Sweden and a different health system. I’m sure their doctors are highly trained and professional. They just have a different system from the US.

My internet is slow. Wasn’t this years ago? Or did he do it again?

My internet is slow. Wasn’t this years ago? Or did he do it again?

The link in the OP has Grohl getting a surprise reunion with the doctor, so it’s only thing time.

*only the one time

I vaguely recall hearing that Grohl fell off a stage during a concert. I didn’t know any details until seeing this interview.

The interview is fairly recent. They talked about McCartney playing drums on a new Foo Fighter song in 2017.

I opened this expecting to report a spammer reviving a years old thread.

But, this was in Sweden and a different health system. I’m sure their doctors are highly trained and professional. They just have a different system from the US.