I was wanting to buy these DVDs - Cinderella, Peter Pan and Sleeping Beauty. Been searching around the web and cannot find out when they will come out of the vault. Can anyone else please? I am Melbourne, Australia if they makes a difference.

Sleeping Beauty just went back in a year or two ago, so that one will be a while, at least.

That isn’t Amazon, those are third-parties selling DVDs at an inflated price because those movie sare now in the Disney vault.

I’ve had Aladdin and The Lion King in my Netflix queue forever. I wonder when those will be available again.

I thought Aladdin wasn’t part of the Disney Vault anymore? I remember reading somewhere it had been replaced with Fantasia.

I hate the Disney Vault. Hate hate hate it.

I thought Aladdin wasn’t part of the Disney Vault anymore? I remember reading somewhere it had been replaced with Fantasia.

Disney’s site shows it as “not currently available”.

ebay…that’s how I found Little Mermaid.

We got a bunch of Disney Vault movies when we were part of the Disney Movie Club…I just bought Bambi. :o I hate what they do with the Vault, but I also hate “new” Disney movies, soooo…if my son wants to watch a movie with me, he has to go to the old-skool stuff. 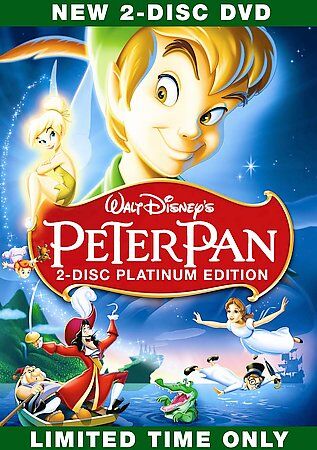 Find many great new & used options and get the best deals for Peter Pan (DVD, 2007, 2-Disc Set, Platinum Edition) at the best online prices at eBay! Free shipping for many products!

I’ve got all three! And I haven’t watched them in years! And I live in Melbourne!

In general every 8-10 years from one release to the next, or generally about 7 years from when it is put “back in the vault” to when it is released again. As an example, the first DVD edition of the Jungle Book was vaulted in 2000 then the re-issue was late 2007. It went back in the vault in January 2010.

So if they hold the schedule (not a guarantee) the next release would probably be around 2017 and who knows what format we might be using by then.

Cinderella went in the vault in 2006.
Sleeping Beauty in 2010 (but that one was only 5 years after the previous release, but Disney was also capitalizing on the film’s 50th anniversary).
Peter Pan in 2009 (another odd one as it has actually had several DVD editions released in the last decade)

But the general “Vault” timeline is constantly tweaked for various reasons (new formats available, significant anniversaries, etc.) so all that is at best a very general guideline.

As far as maintaining the “specialness” of Disney classics, the Vault is quite a bit more effective than the tons of straight-to-video sequels they were making in the mid-to-late 90s. “Walt Disney” just isn’t as thrilling to a kid when Disney movies have the availability and production values of Thundercats or Jem.

Cinderella was released last week in the UK on Region 2 DVD.

I feel no guilt when I purchase $1 bootleg flea-market copies of films Disney has taken out of print. Seven years from now, my son’s not going to be entertained by those films as he could be right now. I’d buy 'em if I could, but I can’t, so I won’t.

drastic_quench, I edited your post because you were telling the OP how to go to illegally download the movies he wants. We try to be very respectful of copyrights here.

FAQ - Rules for Posting at the Straight Dope Message Boards

You are allowed discussion on almost any topic, but…Note that the Registration Agreement prohibits:

any material that you know or should know is … violative of U.S. law. You agree not to post material that in our opinion fosters or promotes activity that is illegal in the U.S.

Specifically:
[…]
Copyright violations: Are NOT OK, under any circumstances. For copyright rules, see Post #3 in this thread… and see the Registration Agreement for “illegal acts.” We consider that discussions of P2P and file-sharing are pretty much discussions of how to evade copyright laws. The excuse “I just want to download public domain movies and Linux distributions” is lame. Very.

Many of the services that used to operate illegally/without paying royalties are now in compliance and so discussion of these services would be allowed, they’re legitimate. But we do not want to see recommendations of companies and programs still remaining that operate in violation of copyright law.

drastic_quench, I edited your post because you were telling the OP how to go to illegally download the movies he wants.

That’s fine of course, but I do see an irony in that my post was no more instructive on “how to” than what you’ve just typed. Such are the power of ideas that the merest suggestion of piracy could inspire an otherwise unimaginative mind!

Here in Orlando, a lot of the Disney cartoons are available at the public library, although you need to check online to which branches have copies of which movies in, since they are pretty popular. The big problem is that the copies at the library are often in bad condition. I found that the Netflix advice about washing with soap and water often helps. I have 4 branches with 6 miles of my house and a few others that I pass regularly, so it comes in handy for DVDs that aren’t available at Netflix.