Bored Panda has a interesting article of old ads.

I don’t remember Burger Kings Pizza Burger. It looks delicious. I’m surprised it didn’t take off. It would be great for couples or a family with little kids.
It needs a better name. That could be the reason it didn’t sell.

Some of these ads brought back a lot of my old memories. I’m puzzled how the Pizza Burger

slipped by my radar

Site: This Online Group Is Dedicated To Vintage Ads, Here Are 106 Of The Best | Bored Panda 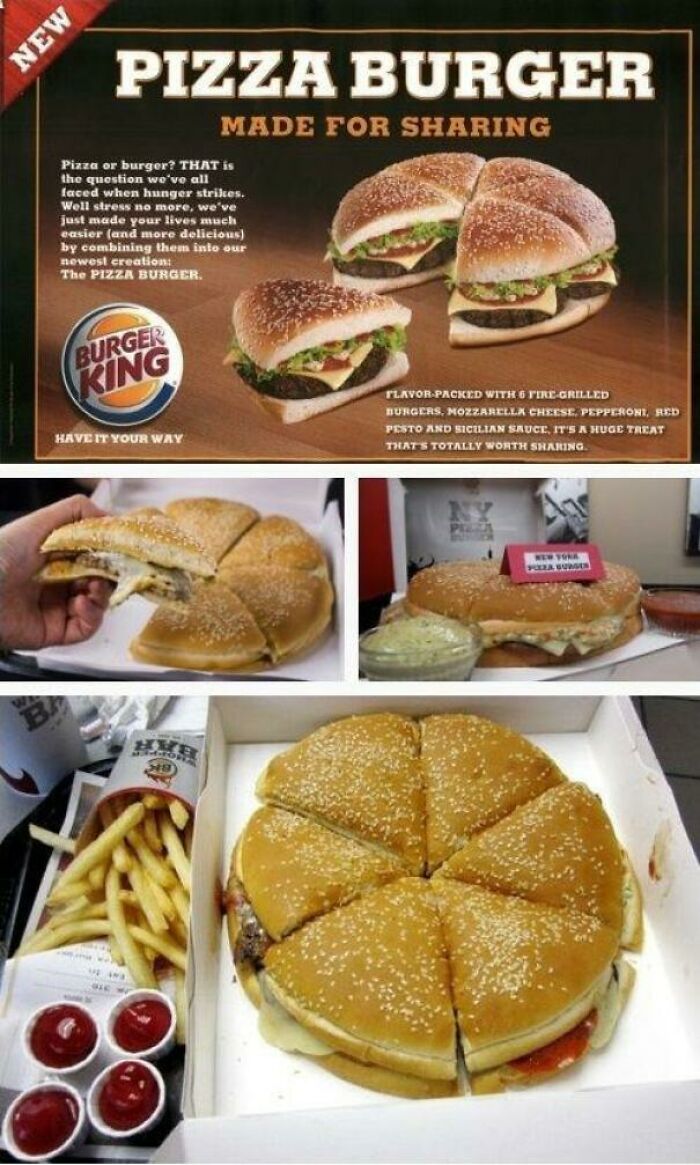 I don’t remember the BK Burger Pizza, but then I don’t eat many burgers and I don’t partronize Burger King.

It seems to me that there might have been some issues with eating a round burger sandwiched between triangular buns. Also it would be difficult to customize the item for individual diners. How are you going to share if one person doesn’t like pickles, another wants extra tomatoes, etc…?

I went through a period of cutting my burger in half. (age 12) It was easier to eat without dripping on me. I like my sandwich cut in half for the same reason.

I got funny looks and comments about my burgers. I quit cutting burgers in half. Unless they’re really thick and drippy. Grease stains are hard to remove.

Cutting a burger into 6 pretty pieces could be tricky. You have to cut through the lettuce, tomato, and patty. I could do it but it wouldn’t look like that ad.

I went through a period of cutting my burger in half. (age 12) It was easier to eat without dripping on me.

Heh. I cut my kids’ sandwiches into quarters when they were little so that they could eat easily. I cut my own sandwiches as well so they wouldn’t object to theirs being quartered.

Fast forward 25 years. I still do this with sandwiches, as do my kids. When we eat together someone always mentions it.

Having been a part of many new-product brainstorming sessions during my career, I can absolutely picture how this idea came about: “Families share a pizza…why can’t they share a big burger the same way?”

I suspect that, like a lot of new product ideas that BK (and other fast-food chains) come up with, it was only offered in a couple of test markets; had it performed well, they would have expanded the test markets, or take it national. But, I suspect that it did poorly in test market, and never surfaced again, which is likely why the OP may have never seen it.

Between the operational issues already discussed (including the fact that it needs a special, very large, hamburger bun), and the fact that it would only really be appealing to someone who essentially wants 6 hamburgers, all of which have the same toppings, I think that I’m not surprised that it didn’t succeed.

The only “pizza burger” I ever heard of was served in a school cafeteria.
It was a burger, drenched in marinara sauce.

Pizza works, because one meal worth of pizza is more than one slice: Someone who’s less hungry might eat two slices, while someone who’s more hungry might eat three or four. This is made even easier by the fact that the slices usually aren’t uniform, so a person who’s more or less hungry can eat larger or smaller slices. And whatever doesn’t get eaten at the first sitting leaves over fairly well.

This, though, looks like the serving size would almost always be “one slice”, and burgers don’t leave over nearly as well as pizza. So right there, you’ve already reduced your market to only families of six. And that’s only if everyone in the family wants burgers, without one person wanting nuggets, one person wanting the chicken sandwich, and one person wanting a salad. And others have already mentioned the awkward shape.

The only advantage of this is… Hm. I’m not actually seeing any. If you want burgers, those are already made individually, in any quantity you might like. Maybe this is cheaper on the menu than six individual burgers, but if that’s all they wanted, they could have just put a “family value deal” on the menu with a discount for ordering multiple burgers, which would have had the same effect without requiring any extra logistics.

Maybe this is cheaper on the menu than six individual burgers, but if that’s all they wanted, they could have just put a “family value deal” on the menu with a discount for ordering multiple burgers, which would have had the same effect without requiring any extra logistics.

Exactly. There’s a kernel of a good idea here, for a shareable family meal, but a super-large shareable pizza-style hamburger isn’t it.

I went through a period of cutting my burger in half. (age 12) It was easier to eat without dripping on me. I like my sandwich cut in half for the same reason.

I’m an adult burger-cutter (and I also cut up apples and watermelon into bite sized pieces).

But I don’t understand the idea of taking something small, making it big, then cutting it up into small pieces. Aside from the novelty, I guess.

It includes a bunch of ingredients and packaging that aren’t on any other BK products: mozzarella cheese, pepperoni, red pesto, big bun, big box. That’s kind of a lot to keep in stock for a single product that probably never sold that well.

It includes a bunch of ingredients and packaging that aren’t on any other BK products: mozzarella cheese, pepperoni, red pesto, big bun, big box.

Though, the mozzarella cheese and red sauce may well be the same that they use on the Italian Original Chicken Sandwich, which appears from time to time on their menu as a limited-time item.

I know sourcing the custom bun can be challenging.

We have a local place that sells a hubcap burger. I think it’s six or seven inches in diameter. They have a local bakery that makes the buns. It’s not an item they can get just anywhere.

Uh yeah, when I think “pizza burger” the pic in the OP is not at all what I’m thinking.

I know sourcing the custom bun can be challenging.

Looking at the picture, the bun for that pizza burger was almost undoubtedly custom-baked for them – not only due to the size, but because it clearly has the six “slices” baked into its shape.

BK has sufficient size and scale that they likely worked with whatever commercial bakery makes their buns in the market(s) where they ran the test markets, to have the buns created.

But, even so…yeah, a custom-made bun (and the box, too) meant that it would have had to be extremely popular in order to justify a bigger roll-out.

Those photos are weird. The one has prominent lettuce, below has a placard sitting ON the food and an unexplained bowl of a green sauce, and below that has a fry carton from Whopper Bar which appears only to exist in a handful of locations.

… the mozzarella cheese and red sauce may well be the same …

IMHO, the sharable aspect is the least useful aspect. Just make a burger with pizza-tasting toppings and sell it like any other limited burger.

What is red pesto?

Apparently, a pesto made with sun-dried tomatoes and/or red peppers.

(Which beats the first answer i was going to give: the ginger-haired lead singer of an Italian rock band.

But I don’t understand the idea of taking something small, making it big, then cutting it up into small pieces.

I make 1/2 lb burgers and cut them in half because 1/4 lb are too thin to cook properly with a charred outside and med rare inside.

I haven’t tried the red but the basil pesto from Aldi is pretty good for what it is and was like $2.89/jar last time I bought it (probably higher now, what isn’t?).