Etsy: Is it real? tell me your shopping online story

Is Etsy the real deal? Is it many small family outfits with hand made and collected items? I have bought a couple of things that I liked very well. A flower vase from the 1940’s for example. But recently I was looking for a warm knit hat and found what I wanted on Etsy. It said the hats were handmade and the company address was in LA, CA. My order came today from Germany!
So do they just make up a story about how they named the company after the children and that the husband helps with the shipping and make you think you are buying American?
It is not that I have anything against Germany or that the hat is not as described. But yet I feel duped.
What has been your experience? What do you know about Etsy?

Sounds like you found an Etsy seller who’s just wholesaling hats tha probably are handmade but drop shipped from Germany.

I’ve got friends who make things and sell them on Etsy. One of them has “stock” items for immediate sale and they also take orders for custom work. The other, I think, just makes a tiny handful of off the rack things but you have to write or better yet, call her to discuss custom orders.

I’ve bought a couple of posters and one small water color from Etsy. I believe there are real people on their selling their handmade wares but from searching for the posters I found they were being sold on multiple shops.

The water color I believe was from a real artist. It was clearly not a print and it took a while to arrive and it had Swedish postage on it which is where the artist claimed to be from. Also there was a note that was a print of a handwritten one that thanked me for my purchase and she hoped I would buy more of her stuff and to tell my friends.

I’ve bought a couple of posters and one small water color from Etsy. I believe there are real people on their selling their handmade wares but from searching for the posters I found they were being sold on multiple shops.

It’s actually pretty common for those of us doing small scale work and crafts to advertise on multiple sites. Why not? There’s no prohibition of it, and it increases the likelihood of sales.

Yes, there are some “not little guy” operations on Etsy, even though there is not supposed to be that. As always, buyer beware. But there are also a lot of legit folks there, too.

I’ve bought a ceramic teapot, a painting, and glass bug on etsy, and they were all hand-made.

I’d love to see a picture of your glass bug, beowulff.

I’ve purchased a dozen or so items on Etsy. All have been as described. I would not hesitate to buy from the site again.

I’ve bought various things from Etsy. All were handmade, and several were custom-made to my specs. They were all shipped from the U.S., though my reasons for buying from U.S. sellers were more for speed and shipping cost - if it were something not time-sensitive for which shipping costs weren’t prohibitive, I wouldn’t hesitate to buy from a seller outside the U.S. I’d rather give my money directly to the small-time artist than to some wholesaler or other middleman.

I sell on Etsy. My art and my wife’s crafts. All made in our home by our hands.

Just like arts and crafts shows, tho, there are lots of resellers. Most labels and descriptions seem to be accurate. If someone is intentionally misrepresenting things, you have the option to report them. Ymmv

I’m not sure if the item was truly misrepresented. It never said made in America. The address of the business made me think that.
It may have been handmade in Germany. Or it could have been turned out of a Chinese factory and sent from Germany. How am I to know? That is why I ask you Dopers what you know of Etsy. There are so many businesses under that umbrella that it may be impossible to make any blanket statement.

Bought an old cigar box one evening during the last Christmas shopping season from an Etsy merchant in New Hampshire. It shipped the next morning from NH as advertised and once it arrived (after a detour to Florida; WTF, Post Office?!) it was clearly an actual old cigar box as advertised, so I had no issues.

There are so many businesses under that umbrella that it may be impossible to make any blanket statement.

Pretty much. Just like eBay, where you have people like me selling things here and there, collectors/flippers who purposely buy stuff to sell, companies that only do business by selling stuff on eBay and big companies who also sell some stuff on eBay too.

ETsy has people who make things here and there to sell, or people who use it like eBay to sell quirky/arty stuff like the aforementioned cigar box, or people like my friend whose job is to make things for and sell them on etsy. I don’t think there’s supposed to be anyone bigger than that - no big companies selling leftover stock or whatever.

I’ve bought about 10 things there, all hand made. One thing was from Australia and advertised as such. I think this phone case I just bought was from China maybe. But, it is as advertised.

I’d love to see a picture of your glass bug, beowulff.

I’m away from home right now, so I can’t show you how it looks in situ, but here is the thumbnail that was sent with my confirmation email:

I’ve bought some small jewelry items on Etsy. One was a bracelet made from old sterling silver cutlery (the handles), and it’s adorable. No one knows what it is until I tell them; I get compliments on it all the time.

I bought a couple reproduction WWI trench knives off an Indian vendor on Etsy. They were exactly as he described and really quite a bargain.

I’ve bought plenty of custom things from Etsy, especially for my wedding - got a beautiful calligraphed Quaker wedding certificate and cake toppers made to look like us, for astonishingly cheap - the cake toppers were from a Korean artist, I just sent a photo of my dress and our flowers and us and what we wanted (a Safety Last clock thing) and she sent them in just a couple weeks, beautifully packaged, with the loveliest note. Blew my mind. I think I spent something like $80 on them and they’re incredible.

I’ve been more than satisfied with all my Etsy purchases, but of course it’s down to the individual seller. Among my past purchases are a flower headpiece for my wedding, indie nail polish, various titanium earrings (which are impossible to find at mainstream stores). I’ve been meaning to pick up a crochet cactus for my cubicle soon.

I’ve had two awesome experiences on Etsy with custom made items- one an amino acid necklace for my genetically oriented sister and the other was a knitter from Texas selling owl hats (before they hit it big). I emailed and said that I wanted that hat ($12? something ridiculously cheap) but could she make an ugly chicken hat custom for my significant other. She said, “sure, I’ll make it tonight. $25 for both.” I said, “let’s do $30”. Recieved them by US Priority 3 days later and they were awesome- not outdoor wear in extreme cold or snow but hilarious to see and used now for 4? years quite frequently.

I’m away from home right now, so I can’t show you how it looks in situ, but here is the thumbnail that was sent with my confirmation email:

Thanks for trying but I get the message “something went wrong” when I try to see it. (I wonder if it’s more of the “wonders” of Windows 10.)

There was some press last year about Etsy’s issues with counterfeiters and large-scale operations pretending to be independent craftspeople. Here are a couple: 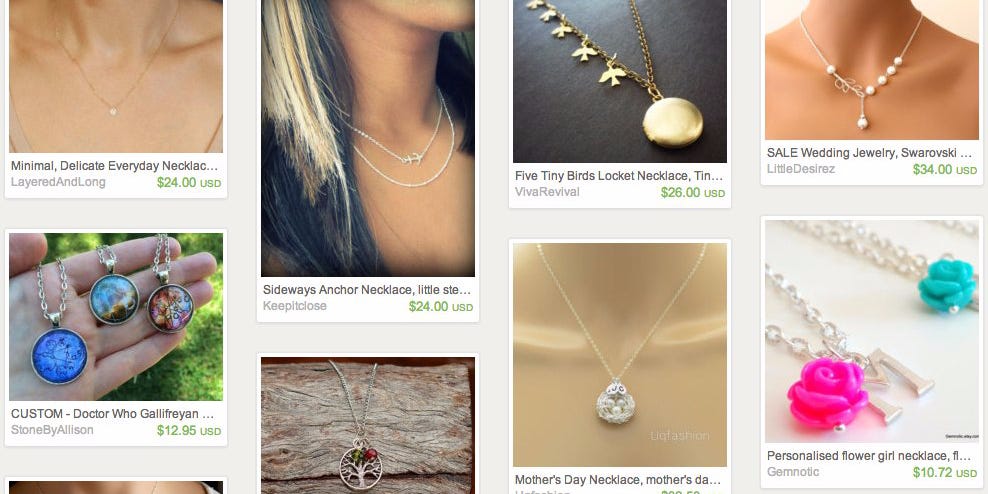 Etsy has a huge problem that could lead to its downfall

As others have noted above, most of the sellers are true to the Etsy vision, but it doesn’t take too many large ones to swamp out the small ones.