He was previously working with them. But in the last episode, he and Hoskins have a conversation about needing to quietly follow a lead on their own.

I’ve been assuming that Walker is basically in charge of the GRC effort to shut down the Flagsmashers, with more or less the level of autonomy that Steve had during the war: part of a chain of command, but high enough up on it that he can make his own strategic decisions about how to get to an objective. He had a bunch of GRC troops with him when he raided the 'Smashers safehouse because he thought a big show of force would be effective. When that didn’t pan out, he changed tactics and decided to follow Sam and Bucky instead.

Certainly, by the time he’s hopped up on super soldier serum and bludgeoning people to death on YouTube, he’s way outside of his remit, but when he gets his ass kicked by Ayo, he’s still on-mission and operating legitimately.

I think he did sympathize with their position and perhaps even their nonviolent thefts, but nothing more.

As far as Walker-it’s a big jump I’d imagine from working in a military framework to being a superhero with carte blanche. Cap had it because he was Cap and was fighting against a new type of enemy-he also became an Avenger with a little time to get used to being a “superhero” (because I can’t think that the first Avengers movie was the first time he’d worked for Fury or met Stark. Walker has a big burden and a lot of freedom and it’s just too much for him.

Battlestar dying was a mistake, both from sloppy writing and because it threw away opportunities to learn more about Walker. Let Hoskins have some of the serum. Make him talk to Sam about being the next Black man with the serum in his body and what that means. But no, he dies for no good reason outside of “shock” value.

Most of what we know about the Accords come from Agents of SHIELD, so who knows how much of that actually applies. And it seems like a good amount was thrown out after the Snap anyway.

IIRC, a big part of the comics motivation for Walker was the death of people very close to him, so I don’t think I fault the show writers for turning to that as a story element.

Kinda, but I also see it as a parallel to Bucky. Don’t forget that Steve Rogers also had his sidekick “killed”.

Kinda, but I also see it as a parallel to Bucky. Don’t forget that Steve Rogers also had his sidekick “killed”.

Their origins are different in the comics, but the Walker succeeding Steve Rogers as Captain America, with Battlestar as his partner, was taken straight from the comics. He definitely wasn’t created just to be killed. He’s still very much alive in the comics, and has never even died once. Unfortunately, he’s suffered a far worse fate - he’s become an obscure side character that rarely appears anymore.

I usually think of “fridging” in terms of representation. The term was originally coined to highlight a disparity in how female characters were treated versus male characters, but the criticism applied to a lot of minority representation, not just women. In this specific case, there’s a ton of more important, more interesting Black characters on the show, so I’d argue that this doesn’t count.

It would have also been nice if someone has pointed out… “You’re talking about jurisdiction? “Captain America ”? Here, in Latvia ?”

You would maybe have preferred Captain Latvia? 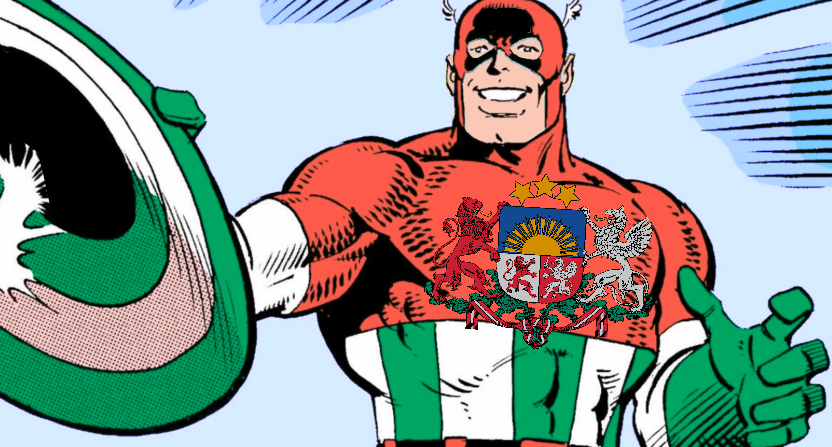 According to the usual Twitterati…men cant be fridged, Cause otherwise we’d be talking about how Larry Lance and Steve Trevor beat or nearly beat Gwen Stacy as the first

Not fridged, but a different and also well-worn trope.

In a film which involves a lot of character deaths, it seems like the Token Minority will inevitably be the first person to go and kick the bucket. In the past this perception was because black leads were kept away from any big-budget films …

According to the usual Twitterati…men cant be fridged, Cause otherwise we’d be talking about how Larry Lance and Steve Trevor beat or nearly beat Gwen Stacy as the first

So, anyway, this isn’t as arbitrary or as much of a “Black Dude Dies First” trope as some are making it out to be. The show has thus far shown itself to be highly aware of racial inequalities and the notion that the writers just selected a random black character to be killed in order to show how dangerous supersoldiers are is inconsonant. Hoskins death highlights how vulnerable Sam Wilson–who is also not enhanced in any way other than his flight suit–is every time he goes up against superpowered people. Like Wilson, Hoskins was a sidekick who stuck with his version of Captain America out of loyalty and a sense of duty above his own personal well-being, and yet, despite Hoskins expressing the willingness to take the serum, John Walker didn’t hesitate to keep and use it for himself, giving him the ‘privilege’ of super-strength and resilience, heedless of what that did to put his companion in danger.

Walker isn’t a terrible person pre-serum, but he is selfish, arrogant, insecure, and capricious; qualities that, when amplified by the serum, have made him vengeful and destructive as well as careless about the safety of others. That the character who was died was black was, I think, a deliberate commentary on how thoughtless white ‘saviors’ are about the actual consequences of their decisions and the misplaced vengeance (attacking the ‘Flag Smasher’ who was not responsible for Hoskins death).

A question I have: what about the legacy of Cap’s shield is complicated? Is it about who should take it on after him?

Well, I don’t think its constructed of stolen Vibranium, otherwise that would have been confirmed by now.

I think its more “Writerclichespeech” then anything, but if i had to make it work:

It was Caps, then he turned it over to Tony because it represented something he didn’t feel HE represented anymore (Becoming Nomad…in theory at least, I don’t think they used the name) and also Tony was right in that it wasn’t his.

Then he gets it back and gives it to Falcon.

I think Falcon was right not to keep it in a way. Practically, it doesn’t fit his power set at present. Then there’s the problem of becoming ‘The Black Captain America’ rather then just keeping his own identity. And maybe he shares some of his sisters beliefs in “This country has kept me down”…

And finally, as others have noticed, the US and whatever shadow cabal it belongs to are a nasty piece of work. Why further identify your self with that? Give it to Isiah Bradley and let him hang it on his wall. Its a Vibranium frisbee. Its not Stormbreaker FFS.

Well, I don’t think its constructed of stolen Vibranium, otherwise that would have been confirmed by now.

Howard Stark got it out of Wakanda somehow, and I doubt they just gave it to him. Although the shield in the show is not Cap’s original shield. That was destroyed in Endgame. He somehow got a new shield during his time travel adventures.

Or found a way to reforge it…

Bits of Vibranium could have fallen outside Wakanda…

Howard Stark got it out of Wakanda somehow, and I doubt they just gave it to him. Although the shield in the show is not Cap’s original shield. That was destroyed in Endgame. He somehow got a new shield during his time travel adventures.

Presumably, it’s the “original” shield, but from the timeline that was created when Cap stayed with Peggy, and was never destroyed in a fight with Thanos.

Which would imply that there’s chunks of the shattered shield from Endgame also floating around out there.

Presumably, it’s the “original” shield, but from the timeline that was created when Cap stayed with Peggy, and was never destroyed in a fight with Thanos.

Right, I forgot about the minor redesign after Steve comes back. Still, considering that the first attempt at including the shield in the MCU was this weird looking thing, I don’t know how much narrative weight I’d put on the extra seam in the white band.

At the very least - since he doesn’t take the broken shield back with him when he goes to put back the Infinity Stones - it’s a reforged version of the alternate timeline shield.

(Has there ever been an official retcon to exactly what Phil’s holding there?)