While YMMV I think this is one of my favorite sci fi films of all time, its themes universal and allegorical. The animation is to this day unique looking and its soundtrack great.
The film despite being animated is unflinching and not treacly and sentimental, people and aliens die, they die horribly. One thing I loved as well is the film assumes you have a brain in your skull, we are never explicitly told how humans got to the Draag’s planet but its safe to assume they are escaped “pets” captured from earth possibly.

Yet in the the USA its mostly known as a “druggie” movie full of nonsensical and surreal elements, always people feel the need to drum up how its pointless to watch sober and on and on. Who are these people? The film is set on another planet and yes the visuals reflect this, but the actual plot is pretty straightforward. If you could understand Planet Of The Apes you can understand Fantastic Planet.

I completely agree. I’ve only watched it straight (on a poor quality YouTube upload no less) and enjoyed every minute of it.

It reminded me a little of some of Ursula Le Guin’s weirder science-fiction.

I agree that it’s a great film. I don’t think that it’s that underrated though: 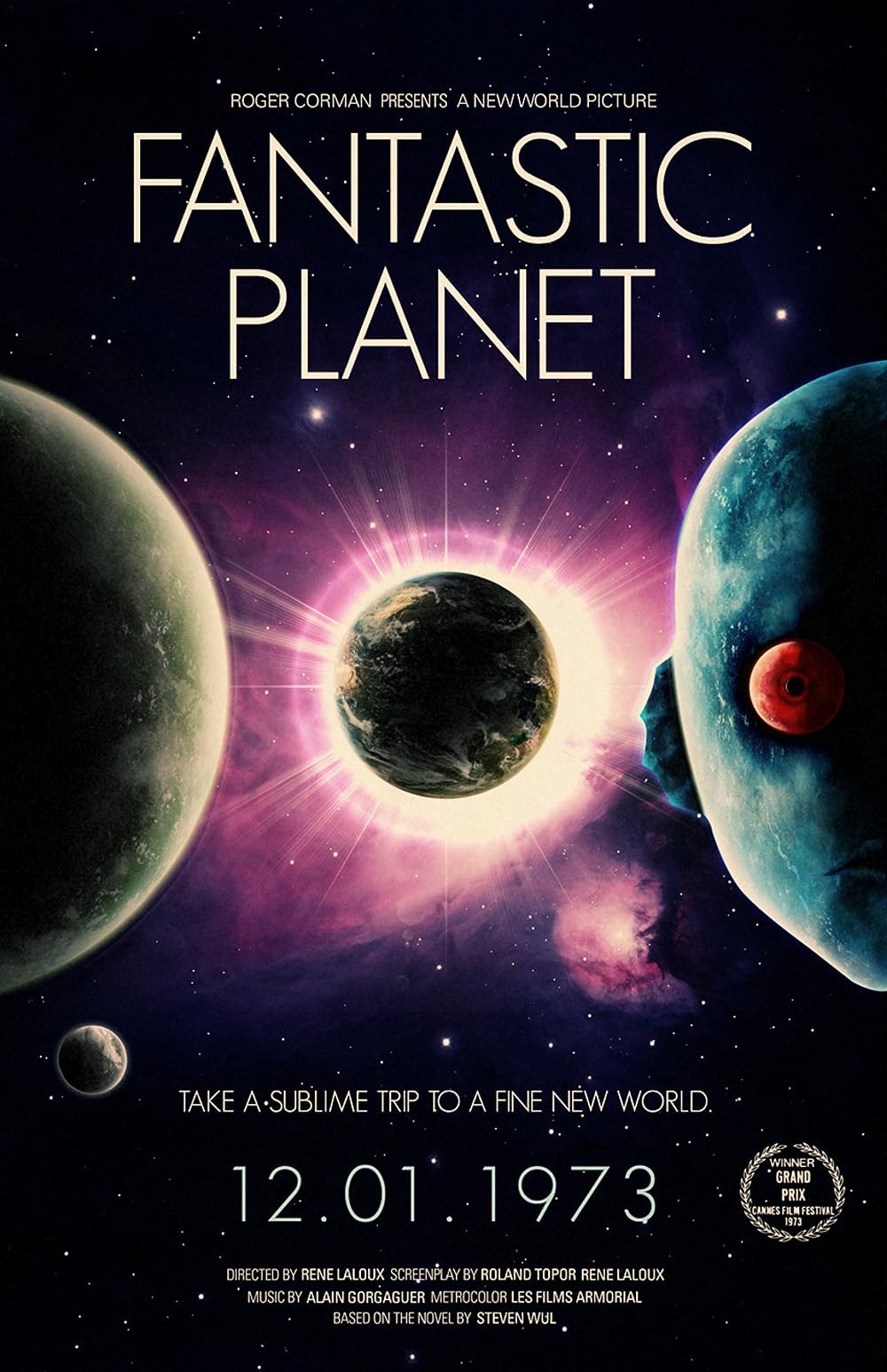 Basically, the people who’ve seen it mostly think it’s great. The problem is that it didn’t get a big release when it first came out. It’s still true that it hasn’t been seen by that many people, but those who did see it really like it. I personally would rate all of the following science fiction films among my 100 favorite films of all genres:

Yeah, the science in a couple of these is weak to nonexistent, so I’m not really sure if they should be called science fiction or not.

Most of the reviews at IMDB are off the wall, one says the Draag are lazy and leave all the work to the Oms (humans) which is not in the film. The Oms are kept as PETS, and mostly by Draag children, they do no labor for the Draags.

Most of the reviews of all films on the IMDb are off the wall. The IMDb is not a good place to find reviews. Fantastic Planet has a pretty good rating on the IMDb, and that’s enough to tell you that it has a pretty good reputation among film buffs. The specific things that people say in their reviews there aren’t very useful, I think.

That movie always makes me think of Night Flight on USA because that was where I saw it. Creeped me out as a kid.

I only discovered this film recently, and it immediately became a favorite. The animation is very distinctive, and I find the soundtrack hauntingly beautiful. In a strange way, the vibe I get from watching this film reminds me of how I felt as a child in the 70’s.

I agree with the positive reaction. I watched this a year or so ago when it came out on DVD in the US and was really impressed with it.

I love that film. Very surreal.

It’s not underrated as much as it’s forgotten. Critics and audiences love it.

It only suffered from a very rushed ending - two minutes to resolve everything, and be Voiceover. I suspect money was running out so they had to rush things.

I have seen a subtitled version that was in French, I’m not sure but I think I read both Time Masters and Gandahar(AKA Light Years) have received possibly heavily edited releases intended for children so you have to worry about that even.

Time Masters was ok, nothing more. The animation was in a more standard style and the story was very disjointed, there is a major plot twist at the end that is badly set up. It feels rushed honestly like funding was cut and they had to quickly slap together an ending for what they had animated so far.

Gandahar also features a plot twist but its set up from the beginning, its more of a fantasy sci fi setting than the earlier two films. Its decent.

EDIT: Forgot to add you should check out youtube, pretty sure both films have been on there in the past.

That movie always makes me think of Night Flight on USA because that was where I saw it. Creeped me out as a kid.

No kidding! I think it played every night at 2am from 1985 through 1987. I haven’t thought of it since then, but I’m pretty sure I’ve seen it at least 17 times, but never the whole thing through at once.

EDIT: Forgot to add you should check out youtube, pretty sure both films have been on there in the past.

Yeah, that’s where I saw “Fantastic Planet”, and I know I saw that another film by the same director had been uploaded (“Gandahar”?) but never got around to watching it.

If it’s not on YouTube anymore you could also check Google Video.

I agree with the positive reaction. I watched this a year or so ago when it came out on DVD in the US and was really impressed with it.

Time Masters is available on DVD; I have it.

It’s kind of muddled, IMO, but it’s not a bad film by any means.

I saw it several times on HBO in the late seventies when I was in my early teens. Definitely made an impression on me. Had never heard of it before that. Same thing happened with Watership Down a few years later. HBO used to show a lot of animated stuff that didn’t get a big release elsewhere. The Mouse & His Child was another one…

Fantastic Planet is the ONLY movie I’ve ever seen where I’ve walked out of the theater before it was finished. I hated it.
~VOW

The Mouse & His Child was another one…

Sorry for the tangent but that is another movie that scarred my childhood. There is a scene where some rats pull apart a sad Donkey toy with wrenches. As a kid that upset me so much I had to turn it off immediately. I never watched it again but I can still remember that scene vividly. Poor donkey…

Fantastic Planet is the ONLY movie I’ve ever seen where I’ve walked out of the theater before it was finished. I hated it.
~VOW

This movie was a staple of USA’s old Night Flight show. I always got bored very quickly. But watching a weird movie late on Friday and Saturday nights may not have been the best way to hold my interest.

I watched it first really late on Sci-Fi channel in the early 90s.